by Mary Anderson Casavant
in SXSW, SXSW Features
on Mar 13, 2011 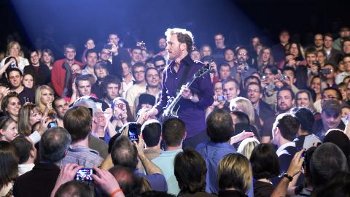 Ever since Jane Pauley left the Today Show, the trials and tribulations of network television personalities have been the stuff of dinner table fodder. However, few contract negotiation battles captured as much attention as the recent skirmish over who would host The Tonight Show, Jay Leno or Conan O’Brien. What started out as a simple transition turned into an epic battle for late night’s soul, one that Leno won — even if many consider it to be a pyrrhic victory. One of the most anticipated films at SXSW, Rodman Flender’s Conan O’Brien Can’t Stop follows a bruised O’Brien in the months after his much-publicized separation from NBC. Determined to soldier on in the face of a very public dismissal, O’Brien went on tour, turning to the one place a comedian can find real redemption: onstage.

Filmmaker: Tell me how this project got started. Did you approach Conan or did Conan approach you?

Flender: Conan and I are old friends. We went to college together. I have known him for a long time, but we’ve never worked together before. Then he found himself in a very strange position a year ago when he departed from his employers and started this live show. I thought to myself that this moment needed to be captured, and I pitched this idea to him. A few days later, I was in New York  working on a documentary about my father, and he called me and said, “I think we should do this.”

Filmmaker: One of the key things to making a good doc is having access to your subject. How did you negotiate access with Conan?

Flender: I told him from the get go that I did not want this to be a Conan O’Brien product. If he wanted a straight-up multi-cam concert film that wasn’t what I was interested in doing… Knowing that he knew what I wanted to do, he gave me full access. He never really asked me to turn off the camera. I think he knew that I had no axe to grind, that I was not Michael Moore proving a point… I wanted to capture something, and I wanted to capture it honestly. That made him feel comfortable.

Filmmaker: One of the things about filming someone like Conan is that he’s already completely comfortable on camera. Was there ever a moment where you felt like you managed to capture the non-performative side of his personality, a side of him that his fans don’t get to see?

Flender: The short answer is yes. But what’s complex about the answer to that question is that Conan, and I think this is true for a lot of comics, he performs even when there are no cameras around. One of his writers said that the funniest stuff he does is the stuff that only eight people get to see. He was hysterical when were on the Harvard Lampoon together over 25 years ago. I think the movie shows both the kind of performance he does when there is no camera on him as well as when he is just being a human being.

Filmmaker: Conan already has a huge fan base. Did you consciously cater toward the fans who already know him or did you try to make a film that was more universal?

Flender: If I succeeded, it’s universal. I wanted to make a story that spoke to larger themes about what it means to be a performer and what it means to be famous. That was my intention… Having said that, there are some jokes in there that some of his longtime fans will appreciate and that those who have never seen him before won’t know.

Filmmaker: While at Harvard, you studied under Ross McElwee, but since then you’ve directed a lot of scripted television and moves. How has that scripted work influenced your documentary storytelling?

Flender: It’s all storytelling. The difference for me is when in the process the script gets written. In fiction filmmaking, it’s at the beginning. It’s sort of backwards in documentary — at least the type of documentaries that I gravitate towards. But ultimately where you end up is the same. I hope to tell an interesting stories with engaging characters that have some kind of arc, the same as with a fiction film.

Filmmaker: How did you approach shooting the performance sections of the film?

Flender: The concert is woven throughout the film so those who did not get to see the show will be able to get a pretty good sense of what it was. It was real guerilla style. There were no cranes, no multi-camera set up, none of that sort of thing. I went back and looked at Don’t Look Back and some of the early rockumentaries. Don’t Look Back was a major influence. I did film the shows multi-camera, but for the most part, it was handheld or someone in the back of the stage on sticks or on a monopod.

Filmmaker: You were the head of production for the rather storied Roger Corman. Was there anything you learned while working for him that helped you in the later stages of your career?

Flender: I don’t think there’s one thing I’ve directed or cut that hasn’t been influenced by the time I spent working for Roger Corman. Pacing is huge. One of the things that people have told me is that it’s very fast-paced for a documentary. That [sense of] pace is something I took from Roger. When I was working for him, all the films I produced had to come in at 88 minutes, not because of any sort of emotional pacing or anything like that but because if you went over88 minutes, you needed a ninth reel, which increased your printing and shipping costs. I had to keep the movie on eight reels to keep costs down. I don’t think I’ve seen a movie recently that I couldn’t take 20 minutes out of it.