by Scott Macaulay
in Sundance Features
on Jan 22, 2010 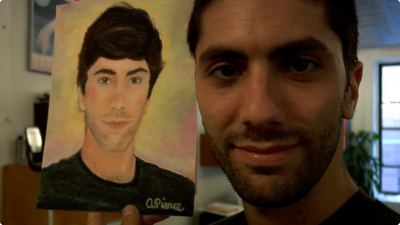 The filmmakers Henry Joost and Ariel Schulman work together in New York as Supermarche, and are prolific producers of music videos, commercials and feature films (Opus Jazz: NY Export, premiering on PBS this Spring, is their latest.) They also share an office with Schulman’s younger brother, Yaniv. One day Yaniv got an email from an eight-year-old girl who wanted to paint a picture of one of his photographs (a production still from Opus Jazz that had run in the newspaper.) Egged on by his brother and Henry, Yaniv said yes, and instigated an intense correspondence not only with the girl but her entire family. Thousands of emails, Facebook messages, texts, letters and phone calls later, they still hadn’t met in person.

The story is told through screens — when Yaniv and company decide to hit the road, you see the entire route on Google maps via an animated sequence of street view frames; the camera is on the ‘You Are Here’ flag of their rental car’s GPS when they arrive; you read the text messages and click through the profile pictures of the people involved, vividly mirroring the experience of the filmmakers themselves. To say that the story behind Catfish is a crazy one would be a tragic understatement, but to give away the central mystery here would be worse. So suffice to say that this is a documentary about a correspondence that turned into a face-to-face relationship, and something that you have to see to believe. Catfish screens at Sundance in the Spotlight section beginning today.

Filmmaker: The film is definitely better the less you know about it… so what should we not talk about in this interview?

Henry Joost: The ideal viewer is always someone who doesn’t know anything about it going in. Then the experience they have watching the film is most like the experience we went through in making it. But of course that’s very hard to maintain. Were you surprised?

Ariel Schulman: You didn’t know the story at all?

Filmmaker: I knew random things – basically that Nev got involved with a Facebook romance. But nothing can really prepare you for what happens.

Schulman: People are like, “Oh I know what the movie’s about, I’m not gonna be surprised.” Then they’re like…. What? The truth is just stranger.

Filmmaker: So when did you decide to start making the film?

Schulman: Henry and I film our lives constantly. We use our cameras like little sketchbooks, we’re obsessive chroniclers. For me, it’s because of dependency on my visual memory — I have no sense of smell, I have a muted sense of taste, so I don’t want to forget anything I see. On top of that, there are just tiny moments of beauty every day, not to sound like the kid from American Beauty, but wonderful things are happening every day, and I don’t want to miss them. I think it’s generational. I film my brother all the time. His life is just full of crazy stories, and I get a little pang of guilt every time I don’t get one on film. So we just have stacks and stacks of hard drives of little things that have happened to us that haven’t gone anywhere. This one turned into something. If it hadn’t, it would be just another folder in my hard drive of 2008 video clips.

Joost: We have clips of every trip we’ve ever been on, hours of footage of us goofing around in the office, every party we’ve ever gone to, our friends, our families, little things we notice on the street, on the subway, and most of it we’ve never even watched.

Schulman: So last year, when technology had gotten to the point that I just had an HD camera in my pocket at all times, Nev turned to me and said “I just got an email from an 8-year-old girl in Michigan who wants to paint my paintings.’’ The minute the painting arrived I started filming. I didn’t know what the footage was for; I thought we’d make a short film about these two artists meeting on the Internet, maybe. And then he starts falling in love with her older sister Megan. She dances, she loves photography, she loves his photography, she thinks he’s a god, he thinks she’s so sexy, she’s sweet, open minded, and he’s his best self with her. I’ve never seen him talk on the phone with anyone like that, and with her he’d just sit down and talk on the phone with her for hours, for two hours – about nothing, about chickens. He’s not usually like that; he’s a very guarded person. But when he came into contact with this family, he suddenly started opening up. He’s my dear brother, and he says to me, “I’m thinking about moving to Michigan to live with Megan on her horse farm.”

Filmmaker: What was your reaction? What did you think of the relationship early on?

Schulman: Henry and I are too involved in our own lives to spend that much time in a virtual world with people in another part of the country. Nev was going through a time in his life when he wasn’t psyched with his job, he wasn’t 100% satisfied with his life in New York, and he was looking for escape and opportunity. A girl says, “Let’s talk every day and then go live on a horse farm.” He’s like, let me see where this will take me, because right now, it’s better than the alternative.

Joost: There was also a creative element, which is that he was getting beautiful paintings of his photos in the mail and giving her artistic feedback. He was mentoring this little girl who was learning how to paint, and she was opening his eyes and helping him become a better photographer. I think he found it creatively fulfilling that he was mentoring this young artist. She inspired him.

Filmmaker: So defining this strictly as an “online relationship” is a little misleading.

Filmmaker: The beginning of the film, especially, is filled with screens, and instant messages, texts, phone calls, voicemails and close ups of Facebook pages – but you don’t include any exposition about social networking itself. Have you ever faced any pressure to impose greater themes on the movie?

Joost: We considered it, but the larger themes are all there in the action, the story. Since the story is about two people meeting online, early on we knew that the computer, handheld devices, and technology would become a character in the story and needed to become part of the visual language of the movie. When Nev was thinking about moving to Michigan, the first thing he did was go to Google Maps and find out how many miles away it was. He’d search for flights on kayak.com. He’d look at new pictures of Megan on Facebook. Graphic information is all conveyed through computers in the film.

Filmmaker: So when did you know that this could be a feature film?

Schulman: Well at the point when Nev was thinking about moving to Michigan, there was no form: we were still just picking up all the footage we usually get. It was only after we got to Colorado and made a few discoveries that we knew what a journey it was becoming. That’s when we started rolling and didn’t stop.

Filmmaker: Can you talk about being a subject of your own film?

Joost: We didn’t have a choice. We were part of it. We spend almost every waking hour together.

Schulman: …and Nev is my brother, and one of Henry’s best friends, so what was happening to him was happening to us too. I thought he needed to go on this journey as much as we did as filmmakers.

Filmmaker: What’s the most common reaction you’ve had to the movie so far?

Joost: The first question is always, “How is Nev?”