by Scott Macaulay
in Sundance Features
on Jan 25, 2010 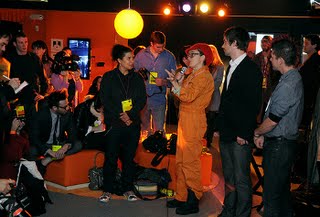 Tasked with “celebrating experimentation and the convergence of art and film,” the New Frontier section at Sundance has been exhibiting feature films and installations for the last four years. Shari Frilot is the programmer, and spent the entire year reviewing work from new artists, figuring out which part of the ground being broken she wants to put in front of the Sundance audience.

How to show film art in an art film context? Frilot tries to make sure that the artists all “speak the same language” as cinema. This year, the spotlight artist is Pipilotti Rist, who creates video work of massive proportions, having recently filled most of the ground floor of the Museum of Modern Art in New York City with a multi-screen project that invited you to lie on a couch and let envelop you. Rist is showing her feature Pepperminta, as well as using the same project for a live installation. Another trend: two films — Oddsac and All My Friends are Funeral Singers — seem to be representing the future of music videos: whole features built like albums, that will tour with the bands (Animal Collective and Califone respectively) and replace the short-form promotions they used to do. There are live documentaries, interactive Google map shows, art that you need night vision goggles to see, festival-long experiments in remixed cellphone video… there are more differences between this work than there are similarities, but collectively, this is the work at the festival asking all the questions.

Filmmaker: How is this year’s programming different from the years before?

Shari Frilot: We definitely charged ourselves to make something very different from the years before. The theme this year is “breaking out.” Breaking out of old forms, old infrastructures, breaking out completely from the screen of presentation — that is, breaking off of the esteemed cinematic presentation and integrating into the realm of walking and talking. Where is the cinematic image as you walk through your everyday life? The shows this year are much more sculptural, [the exhibition] overtly engages the body, in really intense and physical and sensual ways. Pippiloti Rist’s installation is an entire red room, with beds in it (pictured above: Frilot, on left, and Rist).

Filmmaker: She’s a great artist to showcase in this environment, her work is so enveloping…

Frilot: She’s our Artist Spotlight this year, she’s our example of an artist and a filmmaker who’s coming to the festival and platforming her project in a way that I’ve never really seen anywhere. She’s showing her first feature film, Pepperminta, and we’re showing it in the normal Sundance theaters in the more traditional way, and she is also constructing a fully immersive installation that is directly related to the film in the New Frontier space. So there is a visual world that you can enter in two ways with her project: one through a narrative arc in a [traditional theatrical environment], and one where your body is explicitly engaged with a kind of sensual, luscious, red lounge with beds, and the images from the film completely surrounding your body. I had hoped that [these ideas] would resonate with people who are looking for answers in this new, rewired landscape that we’re dealing with in the industry.

Filmmaker: One reason that I love your programming is that it’s not literal, you know, like, “This is the kind of iPhone movie that people are making.”

Frilot: Oh gosh, I take that as a huge compliment!

Filmmaker: Well I imagine it’s very hard to contend with a film industry and the art world and merge them in a way that resonates with the Sundance audience.

Frilot: Well, honestly, I’m following the artists, and I’m following the filmmakers, and they’re the ones presenting sophisticated visions. I can’t take that credit. My job is not to build an art exhibit, my job is to build an alternative universe at Sundance, a kind of festival within a festival, with the support of the community and dialogue and discussion and the artistic inspiration around the evolving cinematic cultures. It’s about creating a [space] where people can get ready for thinking about a different way about the cinematic, to kind of disengage to reengage. But [the artists] have to be speaking the same language that filmgoing audiences have, in a way. It really is about experimentation. How do you present the cinematic image with an independent vision to film festival audiences, how do you do it? And how do you do it in a way that it doesn’t turn audiences off, but turns them on to something new?

Filmmaker: How has your thinking abot it changed in the last few years?

Filmmaker: Which of the pieces are good examples of those ideas?

Frilot: Well, when I say sensuality I’m using as a very broad way of describing how you use your body to touch and feel the work. So a great example is the Post-Global Warming Survival Kit by Petko Dourmana When you enter the installation you walk into a completely black room, but there’s a tent in the room. It’s pitch black, unless you take the night vision goggles that were given to you at the entrance and put them to your eyes, and then you can see an entire landscape — essentially this seascape. The tent is the residence of a worker from the future whose monitoring the rising sea levels and taking notes and keeping a diary, and you can’t see any of this unless you have the night vision goggles because in the future. So, in the vision of the artist, we had to create a nuclear winter to keep the planet cool. So this is something that directly implicates the body — you have to touch him and walk around and go around somebody, and their residence, and where they live, and what they are thinking, and what they are doing, and getting into the interiors of the character, this would-be character.

Frilot: Another great example is a piece by Matthew Moore, he’s a farmer from Phoenix, Arizona. He grows lettuce and carrots and grapefruits, and his piece Lifecycles is actually something that will be installed at the Fresh Market Grocery. With his work, he strived to connect consumer activity, to connect the lifecycle of the produce to the object you are buying. So we’re planting a number of screens in the produce section of the market, so for example, if you wanted to go and buy some lettuce, above the lettuce there’s a video that he’s shot of his own crops, from seeding to packaging. You find yourself in what has become a rather cold experience in buying and shopping, and developing a more physical and connected relationship with the thing that you’re buying.

Filmmaker: You could make a kind of reductivist comparison between that and Food Inc., which is a documentary about Where Our Food Comes from…. But, how do you think the New Frontier work relates to the other features? Or, as a programming section, how does it relate to NEXT?

Frilot: The films in NEXT are pretty traditional indie films. They’re really creative, they’re straightforward storytelling pieces of work, and they’re made for really really cheap. They kind of remind us that a lot can be had with a little, and that actually plugs into the new financial landscape of what our business is, and that’s why it’s called Next. It’s really called Less Equals More, but we call it NEXT because it’s more media-friendly.

Frilot: Exactly, like the next distribution model, whereas New Frontier is where filmmakers are really taking risks in terms of the storytelling itself. A film that has to do with all of this [distribution, new forms of media] is All My Friends are Funeral Singers. It’s interesting, because it was conceived to have the form of an album, and it’s by the band Califone. Oddsac, which is by Animal Collective, is another example. All My Friends… was made to promote the new album, and they’ve been taking it on the road, doing concerts and showing the film, doing a live score, so that’s a model coming up out of the music world. This is a trend that you will probably end up seeing in other festivals.

Filmmaker: It’s so true, and I’ve never thought about it. Rather than make a video, because the music videos is such a dying form, unfortunately, or a changing one.

Frilot: It is a changing form, and I guess this is where it is evolving to, kind of full-scale, feature-length work, some more experimental than others. Then there are films like Double Take and Memories of Overdevelopment. Double Take is just a really super-solid essay film, about thinking of killing his doppelganger, and also thinking about the rise of television in society during the Cold War….. It takes all these different elements and puts them together and it’s very poetic. And Memories of Overdevelopment is about a Cuban revolutionary who is now negotiating his creative freedom and a sense of viability, as the world evolves past an age of revolution, that kind of militaristic terrain. And this guy is such a talent, Miguel Coyula. First-time filmmaker, and really just one of these films that was just born out of the head of Zeus, like fully formed. One thing I feel really obligated to talk to you about, that really warrants attention because it’s so fresh and so significant is Utopia in Four Parts. It’s a documentary that is essentially a performance of a live documentary. He presents the piece live, he does all of the narration live, and the musical score is done live, so it’s all within one room, and he’s there, so the film itself is a rumination all about utopia. it’s really about him tinking about the utopian dream as it has evolved during the twentieth century, of how he believes that today we don’t have great ideas anymore, and we don’t have this shiny optimism that we used to have for the future. The future now scares the hell out of us.