GREG JACOBS, “LOUDER THAN A BOMB” 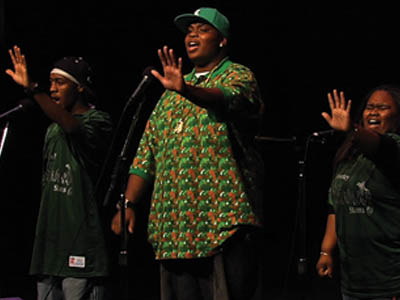 by Brandon Harris
in Director Interviews
on May 18, 2011 The world’s largest youth slam poetry competition is the subject of Greg Jacobs and Jon Siskel‘s audience-pleasing doc, Louder Than A Bomb, a high school competition pic in the tradition of films like Spellbound and Mad Hot Ballroom. For a decade now the Louder Than A Bomb competition has brought together budding young slam poets from over 60 Chicago high schools for a series of juried team and individual readings. The contest is highly competitive — one school goes home with the prize — but the event itself provides something far more valuable than competition; it is one of the few non-sports related outlets for teenagers from vastly different backgrounds in the largely segregated Second City to forge bonds that transcend societal divisions. Allowing us to glimpse the event through the experiences of three compelling, diverse young slam poets and the team from the wrong side of the tracks who are the defending champions, Louder Than A Bomb paints just as much a portrait of the dynamic if troubled city its characters inhabit as it does their devotion to and reliance on their craft.

Greg Jacobs, who co-directed with Jon Siskel (son of the late film critic Gene) has worked  on countless television documentaries for cable networks such as A&E, CNN and the History, Weather and Discovery channels. Since partnering in 2005, they’ve focused increasingly on feature length work. Louder Than A Bomb is their first foray into theatrical documentary, premiering at last year’s Cleveland International Film Festival before launching into a prize-filled run that included audience awards at the Chicago, Philadelphia, St. Louis and Woods Hole Film Festivals, with a slew of juried prizes to boot. The film opens today in New York.

Filmmaker: How did your interest in slam poetry evolve into this film?

Jacobs: Our interest in slam poetry began at exactly the same moment that we learned about Louder Than A Bomb. It was kind of a fluke coincidence. I happened to be driving on Columbus Street in Chicago near Wrigley Field with my wife in the spring of 2005. It was a saturday night in early March and we were driving by the Metro which is kind of a legendary rock club here and there was a sign that on the Marquee that read “Louder Than A Bomb, High School Poetry Slam Finals Tonight!” and a line of kinds running down the block of all races, shapes, colors and sizes. It was such an unusual thing to see, that kind of diversity among kids on a Saturday night on the northside of Chicago. They were also all there to read poetry for fun, which was not something I ever remembered doing in high school [laughs]. It also meant that there were kids on stage performing their poetry for their peers, which is another thing  that was totally unfathomable to me. In high school I wrote the occasional awful poem that should never see the light of day [laughs], so this all was in about five seconds and it just registered as an unusual kind of world that was intriguing. I mentioned it that Monday to Jon and he said “let’s take a look.”

We met with Kevin Covel, the co-founder of Louder Than A Bomb and he sort of became our tour guide through that world. Every step of the way, everything we saw we said, “wow, this is pretty amazing.”

Filmmaker: At what point did you decide to focus on the three slam poets who are profiled most significantly?

Jacobs: They were members of the four teams we decided to profile. Once we met Kevin, he directed us toward twelve or fifteen schools and we went out and over the course of a year, year and a half or so met with the coaches and the teachers and the kids and watched practices and all of that. Then we went to Louder Than A Bomb in the spring of 2007. There was sort of a recruiting angle there; who are the juniors who are coming back for their senior year who really stood out? The kids that we ended up following just jumped off the stage really, they were such interesting people and great performers and generally such a diverse group that we kinda knew that was going to be our cast.

Filmmaker: It’s interesting, they sort of present a geographical and racial cross-section of contemporary Chicago.

Jacobs: It’s such a segregated city to begin with that this was sort of our instinct from the beginning, to get this hard won diversity in a high school setting is really challenging and that aspect of it was always built in, we were always aware of it. I think we would have deliberately tried to create a broad racial, ethnic and geographic representation anyway, it was just coincidental that these kids were also the ones we were going to follow ended up doing that for us accidentally. The cool thing is that they are such stereotype confounding kids in a way. For instance Nova is half African-American and half Indian, she lives in a leafy suburb but she lives on a block that is right on the cusp of some of the worst neighborhoods in Chicago. So she lives in spill over gang territory even though she goes to this really nice school. Her Mom works three jobs and she doesn’t live with her father and all that. Nate on the other hand is an African-American kid from a really tough neighborhood but he has been going to magnet schools all of his life, so he goes to one of the best schools in the city. So we wanted to make sure it wasn’t simple diversity in a way. The kids took care of that for us.

Filmmaker: How did the poetry slam scene develop in Chicago specifically.

Jacobs: Well, slam poetry developed itself in Chicago in the mid ’80s. The story as I know it is that Mark Smith decided that he wanted some of his construction worker friends to hear his poems and he figured the only way to make them pay attention was to turn it into a sports event and that’s where this idea of scoring poem was born. So slam has this long pedigree in Chicago. Then around 9/11 there were a group of teachers and educators who had been working on slam poetry in the schools and when 9/11 happened they decided that they wanted to find a safe space really where kids from all neighborhoods could get together and do this kind of work. The context of it was that there was an anti-gang loitering law being considered in Chicago at that point so groups of kids were being in essence penalized and there were all these questions of civil liberties and all that going on around 9/11, so they just wanted a place where the kids could go and break down all these barriers. So that is how Louder Than A Bomb itself was born. You have this already existing slam community in Chicago with very deep roots and you have these educators who decide, “well let’s create this for kids” and it sort of grew from there. The first year there were maybe eleven teams and last year it was seventy-seven. So that combination of the roots in Chicago and the passion of committed educators has been what’s built it.

Filmmaker: How long did you spend with your subjects? Was it difficult to build trust with them? Were there any slam poets you encountered who didn’t want to be part of the project?

Jacobs: The kids we talked to were really great and adjusted remarkably quickly and really had no problems. I think part of that might be that we sort of cheated a little in our subject matter. We started with subjects who we’re talking to because they get up on stage and reveal some of their inner most feelings. That means that they’re also thinking a lot about how to articulate those feelings in very precise ways. So we didn’t have to do a whole lot of convincing them and the sort of slow build that you sometimes need with more weary subjects. These kids were already in essence doing this. We just happened to bring a camera along. You still don’t necessarily start off shooting. There’s a lot of time that’s spent just hanging out, without the camera, getting to know them and a lot of time spent with the camera, recording moments you know won’t be used in the film, but are just useful to sort of be around and get a sense of what the kids are talking about in their world and maybe you pick up little clues and you slowly build the trust that’s so essential to this kid of project. They were right in it from the very beginning.

We shot for about a year; we shot about 350 hours. Our background is in TV documentaries; between use, we’ve probably been involved in somewhere between 250 and 300 documentaries. So we thought, “we know how to make a documentary, this will be easy, we’ll be done in six months.” It took our editor pretty much that long just to look at all the footage. It took us another year and a half to weave the stories together into a film. What we discovered to our chagrin was the muscles you use to make TV documentaries are much different than the ones you use making a feature documentary. We had to sort of retrain ourselves.

Jacobs: Part of it was that we had a unusual structure in that we had three character profiles of really interesting kids, but not a whole lot happens to them over the course of the year. Their story is sort of their life trajectory in a way. Then we had one amazing team that’s made up of eight kids, five of whom that we focused on, and all this stuff happens to them. So we had to find a way to tell the individual profiles that were revealing and interesting and compelling while keeping the trajectory of the Steinmetz story moving forward. That was the biggest challenge, figuring out how to balance that. I think there are also just differences in how people watch TV versus how people watch movies. We had to learn those and figure out how to apply them. In TV, you’re making everything with the spectre of the remote control hanging over your head. Things needs to be explained very clearly and there really isn’t much mystery. You wrap things up, then you have teases and you’re in and out of segments and there’s commercials and all of that. Film doesn’t have any of that. So we had to learn how to keep the energy up while not making it unsustainable and keep some of the mystery going and not wrap things up and not answer all the questions and leave some confusion. So there were a lot of habits we had to unlearn basically.