by Brandon Harris
in Director Interviews
on Aug 11, 2011

If one had to pick a film that represents regional, micro-budget American filmmaking at its finest, Malcolm Murray’s Albuquerque, New Mexico set Bad Posture would certainly have to be in the conversation. The story a recently unemployed graffiti artist with a bad cigarette habit and a dope dealing roommate, its the type of tale that at first glimpse seem superfluous. Our awkward, unassuming outsider artist, played by Florian Brozek, who also wrote the film, begins to hit on a young woman named Marisa (Tabitha Shaun) in a park but is thwarted when his roommate steals her purse and car while he’s laying on his mack moves. “Didn’t you see me talking to that girl?” he asks as they drive away in her car. “Of course man, but I’m trying to pay our rent here,” says his adorable, matter of fact, thief of a roomie, played by Brozek and Murray’s childhood friend Trey Cole in an unforgettably life like performance. They trade the car to a chop shop owner for $400 and an AK-47 and so begins this leisurely, deadpan hilarious, sneakily ambitious narrative, in which Flor spends his days pining for a way to meet that young woman again, when he’s not unintentionally discharging firearms into their toilet during domestic disputes or handing out flyers for the party at his place that weekend.

Murray, who has done extensive work in advertising shooting campaigns for such brands as Toyota, Microsoft and Stella Artois, previously made a documentary titled Camera, Camera which did the festival rounds last year after premiering at the Los Angeles Film Festival. Bad Posture, his narrative film debut, premiered in Rotterdam earlier this year before making its American premiere at Rooftop Films. It opens at the ReRun GastroPub Theater this Friday. 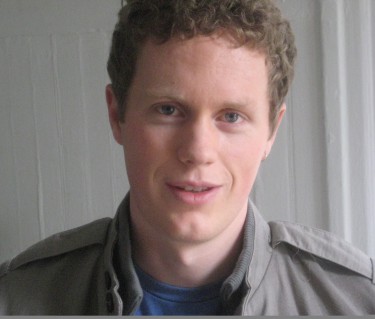 Filmmaker: Although you’re from New Mexico, you live and work in New York these days. What brought you back to the southwest to make Bad Posture?

Murray:  Hollywood has come to New Mexico recently because of the tax incentives, but I still haven’t seen a film that captures the Albuquerque I remember growing up in. The primary goal in making Bad Posture was to create something that was an authentic representation of New Mexico. I wanted it to be true to the place I grew up in. In order to do that, I felt it was better to make a narrative rather than a documentary, because with a narrative we could better control the story. I tried to make a film that felt true to the way my friends and I experienced life at a certain point in our coming of age. Regardless of whether a person is from New Mexico or from Des Moines or from Manhattan, I don’t think most people live the sort of lives we see on Hollywood films. I’m interested in making pictures that wonder about what it feels like to be a human being. That is something I will continue to explore for a long time because it’s an endless question with no concrete answers.

Filmmaker: Florian Brozek wrote and stars in Bad Posture and you both originate from Albuquerque. How much did you and Florian take from your own experiences for the film?

Murray: A lot of the incidents are based on actual events that Florian or someone we knew had happen to them while growing up in Albuquerque. For instance, the transformation of the house is based on an actual house that was converted into a sort of makeshift nightclub by one of Flo’s friends. The place was graffitied top to bottom and was eventually condemned and demolished by the city. If something in the screenplay didn’t actually occur, I’m sure it’s something Flo had always wished would happen. [laughs]

Filmmaker: What was the process like of writing it? It was written for you to direct by one of your closest friends, who’s a first time screenwriter. Did you have to help shape Flo’s process at all during the writing?

Murray: To my knowledge, Flo had never considered writing a screenplay before this one, but he’s read more books than almost anyone I know and he’s a natural storyteller. He wrote an amazing script and I feel lucky to have been a part of the first one. I showed Flo the form of a screenplay — begin each scene with the place and time of day, EXT- FLO’S HOUSE- DAY, but he intuitively knew how to tell a story and he took it from there. I gave him lots of notes and we had plenty of Thai food while discussing particular scenes, but it was his script and he did all the writing. I trusted him to write the script, and he trusted me to bring it to life. It’s such a personal film and neither one of us could have worked with anyone else.

Filmmaker: The cast is almost completely comprised on locals who had never acted before?

Murray: Yes. This was our intention. Flo, who like me moved to New York to pursue his craft, wrote the script with several people in mind who were friends of ours from New Mexico. Many of them lead lives that aren’t that dissimilar from the characters they play in our film and I think that’s were a lot of its authenticity comes from. We have people who have experience dealing herb or stealing cars in the film and they know a lot more about how to sell it on screen than someone who has only seen a grand theft auto on their Playstation or in another movie.

For smaller roles, we auditioned a lot of actors. Most of them were too self-conscious, they were performing for us instead of being who they were. What we wanted were people who could simply reveal themselves to us as they really are, in front of the camera, who were simply living.

Murray: You’d have to ask him! In the film, his illegal exploits is what allows Flo to buy paint for his artwork. He’s some kind of New Mexican Medici.

Filmmaker: Was it  difficult to make the non-actors comfortable enough not to be self-conscious in front of the camera? If so, what were some of your strategies to get them to loosen up?

Murray: The big task was convincing them we were actually making a real film, with lights and a crew, and they would actually have to show up if they committed to a role. That was its own adventure and the small-town politics involved were pretty interesting. I rehearsed extensively with Trey and Flo, slowly helping them trust themselves in front of the camera. Eventually they relaxed, perhaps they got bored of acting and just decided to be themselves. When we brought in the secondary characters, they saw the leads completely calm in front of the camera and it became pretty inappropriate for anyone to put on a major show while we were shooting. If the stars don’t feel like they’re “acting” why should anyone else?

I cast the crew as much the cast. We looked for kind, down-to-earth people without the ego or attitude I too often experience on film shoots. Our set was populated with trustworthy people. I think it felt like a safe place to experiment and to make mistakes. It also helped that most of the real people hadn’t ever been on set so they had no expectations.

Filmmaker: You shot and edited the film. Is that an essential part of the way you work as a filmmaker, or was it simply a matter of necessity working on a low budget?

Murray: I shot the film myself because I wanted the camera to watch New Mexico the way I did when I was a young kid. In many situations I was shy when I was younger and I spent a lot of time simply observing. It’s a meditative and important act- watching. And an integral part of this film.

What’s in focus, and not, really matters, as does the way a shot is framed. Working with real people requires the camera to react to new situations and moments. I felt more natural to react myself than to communicate my reactions to a cameraman.

Everyone who agreed to be on screen had entrusted me with their life, not simply their image. That’s the big difference between working with real people and working with actors. There were completed political and ethical decisions I had to make about how to portray people and I could never have communicated the nuances to an outside editor. I think it would have made my cast really nervous to know their footage was being handled by someone other than me. They are very reluctant to trust new people, and particularly people who don’t know New Mexico.

Filmmaker: There’s something wistful about the film, a melancholy that despite the matter of fact humor and great beauty of your lensing, seeps through the edges of the narrative.

Murray: You see, I think these guys will continue to make and do interesting things, but most of it will eventually crumble. Take the graffiti – although they go out and create something amazing, yet they have no ownership or control over it. If they paint a train, it will surely drive away the next morning and it’ll be almost as if they never did it. If they tag their house, the landlord will eventually find out and paint over it. They are always creating, but their creations won’t last the way perhaps a more traditional artist’s will and there’s some sadness in that. They are the lords of a very small domain. The characters in Bad Posture make graffiti for the same reason that people go to church on Sunday.