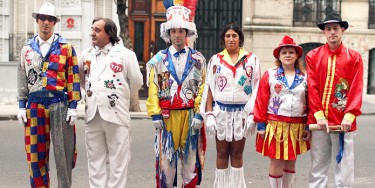 Several years ago director Alison Murray moved to Buenos Aires, where she danced tango competitively, married her tango partner, had two daughters and, now, has completed her fourth feature. Not surprisingly given these life changes, the film, Caprichosos, deals with dance. But instead of tango, Murray has focused on the murga — what she dubs “tango’s poor cousin.” Performed by groups of costumed dancers who rehearse their theatrical presentations for months before premiering them at Carnival, the dance is a local tradition suffused with beauty, drama, and a slight undertone of menace. Writes Murray in a director’s statement, “Unlike its cultural cousin the tango, murga is not taught in any institution; it’s a tradition of social protest and commentary that has remained hidden in the arrabals, the slums of Buenos Aires. With this film we are infiltrating the world of the murgeros, and meet some of the characters that make this dance of empowerment a community-building, life-saving socio-political activity.”

Dance, and more broadly, movement, have featured in all of Murray’s previous films — documentaries Train on the Brain and Carny, and narrative Mouth to Mouth. These films are united too by their empathetic portrayals of cultural outsiders and keen understanding of the relationship dynamics of small groups. Caprichosos has these traits as well, eschewing the overused tropes of many performance films by exploring the history of the dance and the lives of its dancers before showing us the performance itself. It’s a winning, layered film with indelible characters, and a window into vibrant dance world unknown to most of us. We asked Murray five questions about murga, tango and filmmaking in Buenos Aires.

Filmmaker: Which came first — the desire to make a film about the murga dance or to tell the individual stories of the Caprichosos? Or was the movie inspired by the fusion of the two?

Murray: At first I wanted to do something more extensive in terms of researching the roots of the dance in actual dance traditions in Africa, but I ended up focusing more on the indivdual characters in the group and their struggles and aspirations.

Filmmaker: As someone who dances and now teaches tango, why make a movie about the murgas instead of exploring the tango scene you know well? And now that you teach tango professionally, has your attitude towards filmmaking and being a filmmaker changed?

Murray: I did start shooting a doc about tango and got some great footage, but everytime I was shooting in that environment I felt frustrated because I wanted to dance. My husband and I competed in the Buenos Aires tango championship and got to the finals, so my tango needs are being met! But murga is tango’s poor cousin, also an authentically Argentine dance, but less well known. My attitude to filmmaking hasn’t changed, I have always been involved in dance since before I became a filmmaker. 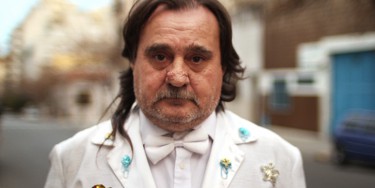 Filmmaker: All four of your movies — Train on the Brain, Mouth to Mouth, Carny and now this — explore the subject of interpersonal dynamics within groups outside the mainstream of society. What interests you about this subject matter, and how do the Caprichosos compare and contrast to other groups you’ve explored in your films?

Murray: I am not exactly sure why I am drawn to marginalised cultures — maybe because my father used to hire hobos to work with him when I was a kid, or maybe because I always have the feeling of not “fitting in” myself… The Caprichosos have something universal about them — they have created an alternative “family” for themselves.

Filmmaker: In contrast to a lot of documentaries about dance, you tease out the actual performance, focusing initially on the characters and the history before moving on to the actual choreography. Tell me about your thoughts on structuring your film and, specifically, how and when you show the dance?

Murray: I wanted to have the Caprichosos’ participation in Carnival, with their costumes and all the bells and whistles, as a kind of climactic moment, as this is what it is for the participants. So therefore I don’t show everything about the dance right away.

Filmmaker: What is the key to juggling the personalities, emotions and conflicts of the individuals in groups like the Caprichosos when making documentaries like this?

Murray: Be honest and have integrity dealing with people. Treat people with respect and don’t cross personal boundaries. Shooting with zero other crew 95% of the time also helps keep people focused on their own lives rather than on being filmed.