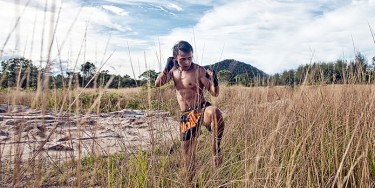 It’s tempting to refer to Dain Said’s Bunohan as the Malaysian director’s debut film, but Said rides to Toronto on the tailwinds of notoriety stemming from the banning of his proper debut, Dukun. That film dealt with black magic and murder — the latter word being one meaning of his latest film’s title. (“Bunohan” also refers to a local village.) A violent tale involving three estranged brothers, the film is set within the worlds of kickboxing, murder-for-hire, and real estate, and it weaves brutal realism with elements of mythological fantasy. We talked to Said about Malaysian cinema, fight scenes and that first feature.

Filmmaker: Since your first film has quite notoriously been little seen outside of Malaysia, do you consider this film your debut? Or is it a progression, or change of pace, from that previous work?

Said: My first film was not shown in Malaysia, thus no one there has seen it. So by that token I guess you could say Bunohan is my feature debut. Especially since the seed of the idea for Bunohan, and the story flow was written way before I started on the other film. So Bunohan, was close to me, and I kept working at it, albeit in between other jobs to make a living and pay the bills. It’s a familiar story for most independent filmmakers around the world. Then I took a couple of months out in 2008 and wrote the first draft, and a year later taking betwen 3-6 months to the final draft.

There is a change in terms of the pacing and approach, for the obvious reasons that the story is very different, but I do think both films share a kind of darkness, in their themes and concerns; the primordial elements, such as the belief in magic and/or supersttion that pervades and exists in our culture and society, however modern we seem to be. I see it as a kind of underlying seepage that works through both films. LIke the black water swamp in Bunohan, that seems to flow and bring these lives together but also drifts them asunder.

Filmmaker: How did you develop this film, and the idea of violence within family relationships — does this come from any experiences of your own or relationships you’ve witnessed?

Said:If I did use anything from the experiences or characters in my family, then I certainly didn’t do that consciously, though we are and have always been pretty intense and lively in our relationships, but certainly not to the extent of hatred or murder.

But in another way I did tap into some personal experiences. I grew up with my sisters and parents, near this place called Kampung Bunohan, or Murder or Killing Village, which is the setting of our film, up north close to the border of Southern Thailand, where my father was a cop. It was at the end of the railway line, a two-horse town. The border meant nothing, people just cross it like they were crossing a road. It still happens today actually. There’s a strong reminder of the way American directors, (such as Sam Peckingpah and others), in the 60’s and after, who treat Mexico as a mythological paradise for gangsters, misfits and non-conformists. In this part of the world my father told me stories, where violence was prevalent. And the main characters are based on people I knew, such as the kickboxer Adil, and in particular Ilham the assassin, based on someone whom I met in early 2000.

But from the public realm, the idea of the mess the father leaves in his wake, (having taken two wives), and the kinds of emotions that is churned up in its trail, is a well known one within our culture and society. It’s a different kind of violence, and Bakar the scheming brother who is a school teacher, expresses yet again another kind of violence, which has far reaching consequences, and in a way is far more destructive as it impacts into all levels of society and culture, because he uses everything and everybody to get what he wants.
But if I was to be really honest, and dig deep, going back to the personal level, and I don’t think I’m alone in this, I had issues with my father.

Filmmaker: What was your goal in shooting the fight scenes? There are many different ways to film hand-to-hand combat? Did you try to do it differently and, if so, how?

Said:The goal was, at the start of the film, to create an entry point into the story and cultural setting of the film, that of fighting, betting, money, corruption, greed etc. but also there’s a certain beauty, a combination of grace and courage, because kickboxing, especially the way that it is practiced in the villages, still retains for me a certain allure, because it is not about machismo, but is like a dance, and very much centered in the community. A rite of passage for most boys. The fighters stance, is more like a cock fight, in fact in the old days the fights are accompanied invariably with cock fights as a pre-match warm up, for people to place their bets. So I would say the fight scenes especially in the opening sequences of the film, was to set the tone, mood and theme of the film, that of violence, hence also the intercutting to a man having a traditional massage of his penis, the grace, beauty and pleasure of the cock in the fight as it were.

I wanted the fight scenes to feel real. I did not want the high-flying hyper-real feel, with wires etc. because I wanted to express the emotion and spirit of the fight and less the acrobatics.

Even though we of course, for reasons of production logistics, needed to plan and choreograph the fights, but on set, I tried to achieve the ‘realism’ by taking out some choreographic moves, by not over rehearsing, by changing some moves at the last minute. I could only do that because, I had full confidence in my actors, and I had real fighters as their opponents. 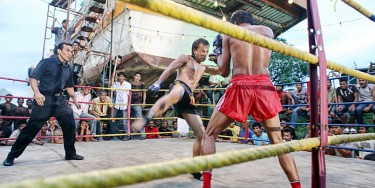 Filmmaker:How do you view yourself with Malaysian film culture? Who are your peers there, and do your films find a local audience or a more international one at festivals?

Said:I don’t know if I view myself in the way that your question intended. But I do see the kinds of films that I’d like to make, and the things that I’d like to deal with, is something that comes from my specific personal as well as larger cultural experience. By the age of six I had lived in this ‘cowboy’ town, and spent my pre-teens living in Egypt, then London for most of my youth. The idea and reality of living in a hybrid mix, is something that I’m used to, and is for me a very apt if not necessary way of dealing with my culture, society and the stories that I want to tell…and Malaysia is vey multi-cultural.

Like certain other filmmakers that I like in Malaysia, I think I make films that are not easy to categories, nor fall neatly into the existing poles in Malaysia of (for the sake of understanding as I don’t really subscribe to terminologies) ‘mainstream’ and ‘art-house’.

In Malaysia I have a lot of respect and love of the films made by three film directors in particular, that I feel expresses the nature and state of our culture and society, with their own take in the way that they approach their ideas, themes and subject matter, creating a singular vision and strong unique voice in their films.

An established filmmaker called Uwei Haji Shaari, whom I think can really plug into the Malay psyche, and tell wonderful stories, and gets to the heart of the issue within our culture. No one can do it like he can.

Of course your readers may not know Malaysia, but there are three main different racial groups, and the other is someone I had only come to know recently, who are both Chinese, and they are Chris Chan Chong Fui, who made Karoke (in Malay though he is Sabahan) which made the Cannes’s ‘Director’s Fortnight’ in 2009. A beautiful piece of work which conceptually in its approach opens up new ways of telling a story in our culture, by playing and diffracting the visual text, subtitles and songs in the nations Karaoke bar, as a way of expressing the fragmentation and the void at the center of a homecoming by the protagonist, whose village, and surrounding landscape has been over run by a mono crop culture of oil palm plantation, expressing the corporate zeal for development that takes away from the ‘small’ people the idea and the reality of home.

Ho Yuhang is someone I’ve known for a long time, and he’s made 4 or 5 films. I think his film Raindogs, which has gone unrecognized ( at least here in our country), is a watershed in Malaysian filmmaking. It breaks all the rules, and sets another standard and level of articulation, not just in story telling and structure, but in getting to the center of loss, grief and exile for a Chinese family, at the heart of the nation.

I’m not really sure, as the film isn’t out yet in Malaysia, but judging by the response so far, I think it’s generating a lot of interest. Internationally, I hope, organizers and audience, can get beyond the exotic value, and the kind of expectations, that may not conform to their idea of an ‘indie’ kind of film, that they are used to coming from South East Asia, or from a developing nation.

Filmmaker: What was the hardest element involved with the making of this film?

Said: At first I thought our biggest challenge would be the swamp and tidal movements, and I wanted the beautiful changing light and the dark clouds, that characterize and heralds the coming of the monsoon rains, and also of course the venomous creatures that crawl, but with great planning (3 back up locations for every location, as the area is prone to flooding), and a wonderful core team all round we overcame or rather nature gave us her blessings.

But all that was nothing compared to dealing with the human element in getting it made, financing it, and keeping creative control, that I and my producer, fought so hard for. In the words of Jean Pierre Melville, ‘Your first film, you have to make it with your own blood’.