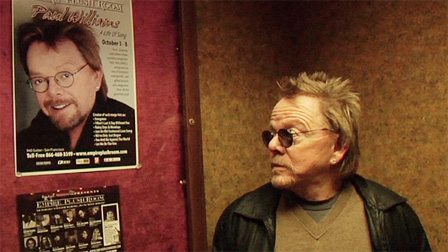 As director Stephen Kessler notes in his documentary, Paul Williams Still Alive, in the ’70s, the tiny blond singer was everywhere. He could be found on daytime game shows (The Gong Show) and nighttime dramas (The Love Boat), on The Muppets as well as in the lead of a Brian DePalma film (The Phantom of the Paradise). And then he faded from the cultural limelight. How much of his disappearance can be explained by the simple fact that people — audiences and performers — get older? Or does the fade of Williams’ quirky and emotional star say something deeper about the state of our culture? For Kessler, the subject was also a re-entry to the feature business; it’s been over a decade since his films The Independent and Vegas Vacation. We talked to him about all of this, as well as what he’s learned from directing commercials.

Filmmaker: When did you first encounter Paul Williams? And when
did you first decide to make a documentary about him?

Kessler: About five years ago, I was looking around online to buy an album from one of my favorite dead entertainers, Paul Williams. As it turned out, he wasn’t dead. I found out he was playing a gig up in Winnipeg. That’s where I met him.

Filmmaker: How did you first approach Paul about the documentary? How did you sell him on it?

Kessler: In Winnipeg, I told Paul I wanted to make a doc about him, and he turned me down. I told him that most people didn’t know his music anymore, and they should. And a film could help that. And he told me that I could film him for that one day, and we’d see how it went. That was the beginning of almost three years of filming.

Filmmaker: The film seems to trade on the idea that Paul Williams is a little bit of a “lost” figure in terms of cultural recognition. For you, this film seems to come after a decade-plus break since your last film. What have you been doing during this time, and were there ways you identified with Paul’s stepping out of the public eye?

Kessler: I got married, I started a family, I had a few projects that were false starts. I made a hundred commercials. I worked on Jimmy Kimmel Live. Looking back, it’s an unbelievable amount of time, but in the moment, it seemed like everything was just rolling along fine. That’s how the film business can be. And starting this film, as a side project, was my reaction to, “Oh shit, maybe nobody’s going to give me a movie again.” Paul’s dropping out of show business was kind of voluntary; mine wasn’t. But what I got from Paul was that even though your work can make you happy, work isn’t everything. Simple, but true.

Filmmaker: How has your experience directing 100 commercials affected your approach to this project as a director?

Kessler: Well, along time ago I did these commercials for Snapple that felt very homemade, and I always wanted to make a film that felt the same way. And shooting commercials gives you alot of experience shooting in a lot of different locations and lighting set ups, so I think it gives you a basic confidence that whatever situation you’re shooting in, you’re not gonna fuck it up too bad. I’ve shot lots of documentary style commercials, and my interest in small weird human moments are all over this film.

Filmmaker: What did you learn about Paul Williams the man from making this movie?

Kessler: One of the greatest things I learned from Paul is that, as an artist, he doesn’t judge his work. He doesn’t finish something and beat himself up. He finishes it and lets it out into the world. And then he starts something else. And it seems like all great artists — Dylan, Picasso, Woody Allen, Shakespeare — they do the same thing. They don’t judge their work. They just finish it and start something else. It’s a great lesson.