The living room-sized lobby of the IFC Center was teeming with people over the past two weeks as DOC NYC concluded its second year. With more days, more films, more panels and more filmmakers in attendance, the festival was a veritable feast of documentaries. 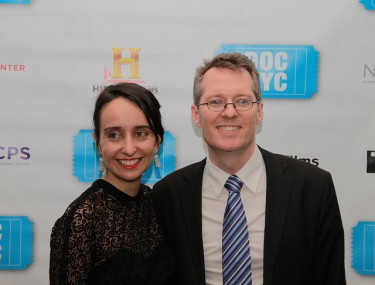 Among the faces passing through the crowd — including Albert Maysles, Werner Herzog, D.A. Pennebaker and Barbara Kopple — were those of festival directors Thom Powers and Raphaela Neihausen. Wearing the titles of artistic director and executive director, respectively, the husband and wife team conceived DOC NYC from their Manhattan apartment. Though involved in their own endeavors — Powers is the documentary programmer for the Toronto International Film Festival; Neihausen is an independent film producer — the couple’s weekly documentary series “Stranger Than Fiction” has established them as a creative force.

Throughout DOC NYC’s nine days, Powers and Neihuasen were ubiquitous. When they weren’t introducing the festival’s 52 features and 40 shorts, they were moderating the Q&As. And when they weren’t doing that, they were busy in their makeshift office in the basement of the IFC Center, faces lit by computer screens.

Filmmaker managed to grab each of them separately to talk about their working relationship, the evolution of DOC NYC, and, to the extent that they were able to in the midst of the madness, DOC NYC’s future direction.

Filmmaker: Thom, you mentioned in your opening night remarks that you and Raphaela conceived DOC NYC from your apartment living room. What are those living room sessions like, and how you two separate your responsibilities?

Powers: It’s really true that Raphaela and I do this out of our small, Manhattan apartment, shared with our child. And there’s a lot of overlap. Raphaela, holding the title of executive director, is ostensibly looking after logistics, and I’m ostensibly looking after curating. But inevitably, Raphaela is watching a lot of films with me, and inevitably I’m getting involved in other kinds of logistics.

Filmmaker: How do you two go about putting together the program?

Powers: This was the first year that we did open submissions. For our inaugural festival last year, I was just curating out of stuff that I was normally seeing. And this year we decided to open it up to stuff that we might not otherwise be getting. We got 500 submissions between features and shorts this year. We have a screening team that helps us go through them. But Raphaela and I definitely see several hundred films a year.

Neihausen: We were overwhelmed by the number of submissions we got this year.  We did Without a Box and had it open for two or three months. And we got this deluge of submissions from all over the world — from Iran and Israel and Cuba and all these far flung corners of the world — and it was very exciting to see that. We really love these films and it’s nice to be able to find a platform to show them.

Filmmaker: What qualities do you look for when sifting through 500 submissions?

Neihausen: It depends on the section. For the Metropolis section, which is about New York stories, it’s not just the story; there’s also this element of craft and filmmaking. For the Viewfinders section, we’re looking for people that are speaking in original voices. For the Icons section, we’re looking for interesting profiles of legends of our time. And I think in everything we do we look for an important story that is balanced by craft and filmmaking.

Filmmaker: Do you ever have radically divergent views about the films you see?

Filmmaker: How do you think the festival has improved this year?

Powers: Besides adding days and adding films and adding new sections, I think a big area of improvement for us was the way we approached panels. We expanded the number of panels, and structured it so that people could attend panels À la carte. You could either buy an Insider pass to attend them all, or if there was one or two things that you wanted to attend you could choose them À la carte. We have a real advantage being in New York City where we can draw from a pretty incredible talent pool of not only decision makers — people who are on our panels like State of TV, State of Theatrical, State of Digital — but also a creative pool who populated our panels like the Art of Cinematography or the Art of Editing. So there’s the New York advantage.

Filmmaker: What purpose do you want the festival to hold for filmmakers and filmgoers?

Neihausen: What’s exciting for us is to be able to gather all these people at one point in time to share their films and talk about their films. The fact that we can have 200 guests attending the festival this year — and almost all of our films had people in person, whether they were the films’ subjects or the filmmakers — is very exciting. It’s also very exciting to see audiences growing for these films. We took a risk: we really expanded our lineup and hoped the audiences would come, and the audiences really blew us away.

Powers: I want this festival to be able to make the most out of New York City. And an exciting initiative that we started this year was a partnership with Grey New York called Launch Pad, where we’re going to try to connect films to brands to help bring in a new wave of money for documentary marketing. And that’s a kind of only-in-New York initiative. It’s also exciting to see the kind of talent who we have on our jury panel. Our Viewfinders jury included Sewell Chan, who’s the Op-Ed editor of The New York Times. It’s exciting to see Sewell soaking up these films. And who knows, maybe one of those will find their way into content for the Times. Another juror of ours is Logan Hill, the newly appointed senior editor of GQ. Logan is looking for lots of content [at GQ]. So New York is a cross roads of journalism, of activism, of advertising, and all of those worlds hold important potential for helping these films spread wider.

Filmmaker: As the festival grows, do you see it expanding beyond the West Village into other parts of Manhattan?

Neihausen: I think we’re very rooted at the IFC Center. That’s where Stranger Than Fiction plays. And NYU has been a partner from the beginning. It’s a very natural fit, they’re a few blocks away. So I do really like the community aspect of having everything be walkable and centralized and accessible. You can never predict what the future will hold, but right now it’s definitely a West Village, downtown Manhattan festival.

Filmmaker: Can you describe the physical and emotional duress of putting on a festival like this?

Powers: Well, the week is: you wake up at 7 AM with a lot of worries on your mind, and you plunge into it, you go from film to film to film, and by 12:30 at night it’s kind of hard to talk and make sense, and we just kind of collapse into bed. [Laughs]