STORYBOARDING TARKOVSKY AT THE SUNDANCE LABS 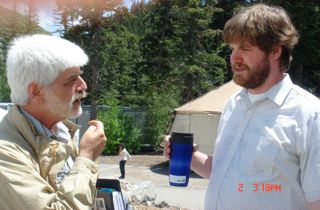 The Sundance Director’s Lab is underway, and one of the participants, John Magary (pictured at right with Sundance Lab advisor Gyula Gazdag), has agreed to blog it for Filmmaker. Here’s the first of his posts.

Day One smelled like chicken. Day Three smells like farts. I’m not talking about the Lab — haven’t gotten there yet.

One can be coaxed out of a crippling fear of flying—it is irrational, after all—but heights is another matter. With heights, all you can say is, “Oh, stop being so scared.” (Hot tip: saying things like that to a phobic isn’t remotely helpful.) And I guess I knew that an Amtrak train ride from New York to Salt Lake City might at some point teeter along the trembling biceps of the Rockies, but still I’m wondering, “Can not our country build its own national subway?” Cuz you can’t fall when you’re underground.

(There’s that weird feeling when you travel through the Big parts of America, right? You want to swallow stuff up: what you’re seeing is simultaneously too much and never enough. It’s huge, a little terrifying, a little garish: a landscape painted with free market urges. America knows this: God is a capitalist.)

I was told by just about everyone that this fifty-four hour journey would more or less cure me of my “fear”—their quotes. You’ll be cooped up for hours on end in a small space, they said, a small space that smells like farts, and the people will be weird and you’ll be late to every stop and the food’s bad. But so far it’s had the opposite effect. The slowness, the pretty views, the generous legroom and little pillows (two!), the conversations about office space engineering, states’ laws regarding pasteurized goats’ milk, what exactly a “tumbleweed” is—it’s all been pretty amazing.

Okay, that’s a lie, not amazing, but pleasant. Or, pleasant enough. Look, I hate flying. And the food’s just fine, thanks. Besides, I’m on a TRAIN, rolling through this crazy land of ours! Comrades! Watch me hurtle! I’m splitting this country in two! IN TWO!

And there goes a denim jacket with an iron-on kitty that says, “BUG ME AT YOUR OWN RISK.” (I don’t get it.)

Disclosure time. Filmmaker Magazine agreed to pay me $75 per word to write this blog, so you’ll understand if the syntax gets unnecessarily complicated, the language purple. If I can stretch it out enough—like limitless, infinite, inexhaustible, measureless taffy pulled from puddles of moonlight, darkest, blackest, bluest moonlight–I might clear two years’ salary in just a few posts. And yes, I will be paraphrasing Kubrick a lot here. (“As Stanley Kubrick said while shooting A Clockwork Orange, ‘a stitch in time saves nine.’”) And I will occasionally talk about the Sundance Directors’ Lab, and what we are doing there.

Like, here’s a nugget. I am currently storyboarding (or trans-storyboarding, or whatever) a scene from Arnaud Desplechin’s My Sex Life…or How I Got Into an Argument. It has Marion Cotillard—ten-years-ago Marion Cotillard, I only just realized this–and she’s naked, so I’m trying to watch it against a backwall, so that no one can see what I’m watching, you know, so as not to offend the lady in the denim jacket. Feels a little pervy, but Sundance asked for this. An advisor at the Lab, Gyula Gazdag (wasn’t he a Bond villain?), asked that we pluck two scenes from movies we love or hate, and storyboard them. So I have My Sex Life and an early scene from Tarkovsky’s The Mirror (natch). Both scenes are well-loved, and both, predictably, had a lot more going on in them than I realized.

I taught directing to undergrads last year, and this exercise would’ve been helpful for them. Damnit. It’s always useful to break down a scene that somehow beguiles you. With these two scenes, Tarkovsky and Desplechin—two very different filmmakers, obviously—play around a great deal with point-of-view, and a kind of hide-and-seek blocking, and achieve something magical through very different means. Tarkovsky, with his long crane-set takes floating over the grass, and Desplechin, with his seemingly improvised jump cuts and frame-rate-ramping.

Train just stopped again. Not at, like, a platform—just somewhere in the mountains. For an hour.

Put your money in railroads, guys. This! Is! The Future!

The man I talked to about office engineering, whose wife ordered a steak with peculiar gusto, said they were headed to San Francisco.

The coldest winter I ever spent was a summer in San Francisco, I told him. (Stanley Kubrick said that.)

I’m dancing around this, okay? I am a little nervous about this Lab. How’d I get myself into this? Am I remotely ready for this throttling? One way to comfort yourself is to say, “Well, I don’t deserve this.” Then it all gets to be like a joke, and then you can go on being fearless again.

But yeah, I’m bringing a lot of Fear to the Lab. A suitcase full.