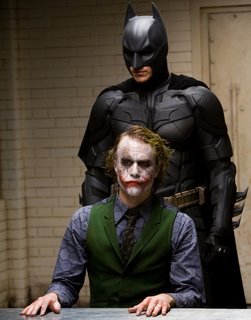 I was late to see Chris Nolan’s The Dark Knight, only catching up to this astonishing and unexpectedly grim film this past week. It’s probably the first action film I’ve ever seen that’s exhausted me not by the intensity of its fight sequences but by its embedding of specific moral and philosophical dilemmas in all of its significant set pieces.

Because I hadn’t seen the film, I avoided reading a lot about it, which means I missed the various pieces that have either celebrated (as in Andrew Klavan’s Wall Street Journal piece) or decried (as in Dave Kehr’s review) the film for being a celebration of the policies of George W. Bush.

There seems to me no question that the Batman film The Dark Knight, currently breaking every box office record in history, is at some level a paean of praise to the fortitude and moral courage that has been shown by George W. Bush in this time of terror and war. Like W, Batman is vilified and despised for confronting terrorists in the only terms they understand. Like W, Batman sometimes has to push the boundaries of civil rights to deal with an emergency, certain that he will re-establish those boundaries when the emergency is past.

And like W, Batman understands that there is no moral equivalence between a free society — in which people sometimes make the wrong choices — and a criminal sect bent on destruction. The former must be cherished even in its moments of folly; the latter must be hounded to the gates of Hell.

The Dark Knight, then, is a conservative movie about the war on terror. And like another such film, last year’s “300,” “The Dark Knight” is making a fortune depicting the values and necessities that the Bush administration cannot seem to articulate for beans.

Is the Dark Knight just George Bush with a better outfit, demanding that he be allowed all of the available “tools” to combat terrorism, even if they include torture and eavesdropping? Like Bush, Batman has his own warantless wiretapping program, but Nolan is kind enough to assure us that, once his goal is accomplished, the superhero will blow it up. Is he suggesting that we can count on the Dark President to do the same?

Now, at his blog, Mark K-Punk examines this argument not by seeing whether Bush can be compared to Batman and the Joker to Osama Bin Laden but by examining the film’s articulation of notions of justice, virtue and causality and contrasting its processing of these concepts to the worldview of the neo-cons.

There are many symptomatically interesting things about the right wing attempts to appropriate The Dark Knight that are doing the rounds at the moment. The idea is that the Batman of the film equals Bush – a misunderstood hero prepared to make ‘tough choices’ in order to protect an ungrateful population from threats it is too ethically enfeebled to confront.

In a couple of intricately argued posts, Inspersal demonstrates that The Dark Knight by no means presents ‘tough choices’ as ‘hard but necessary’; on the contrary, whenever Batman resorts to torture, it either yields nothing or is counterproductive. What neocon readings of the film must overlook is that this is exactly the same in geopolitical reality: far from being unpalatable but necessary, the Iraq misadventure, Guantanamo Bay, extraordinary rendition etc have either achieved no results or made things worse. What’s interesting here is the doggedness of the neocon fantasy, which is precisely a fantasy of ‘being realistic’ — astonishingly, elements of the American right appear to actually still believe that the Bush admininstration’s policies are successful, and that the American public has rejected them on the grounds of highminded (liberal) ethical qualms rather than for pragmatic-utilitarian reasons (too many of our boys being killed).

… What’s interesting about The Dark Knight is that is not really about Good versus Evil at all but ‘good causes’ versus aberrant modes of cause/ causality.