by Nicholas Rombes
in Columns, Filmmaking
on Dec 5, 2011

2. Has Jeffrey caused her to act like this, or has Frank? Jeffrey is not Frank, although Dorothy treats him like she might were she to find him hiding, unarmed, in her closet.

3. In the fevered dream of Blue Velvet, what causes what is impossible to untangle, as if concepts like “before” and “after” don’t mean a thing.

4. In Steve Erickson’s novel Zeroville, Vikar—who becomes an editor not just of film but of a version of reality itself—says this:

The scenes of a movie . . . can be shot out of sequence not because it’s more convenient, but because all the scenes of a movie are really happening at the same time. No scene really leads to the next, all scenes lead to each other. No scene is really shot out of order. It’s a false concern that a scene must anticipate another scene that follows, even if it’s not been shot yet, or that a scene must reflect a scene that precedes it, even if it’s not been shot yet, because all scenes anticipate and reflect each other. Scenes reflect what has not yet happened, scenes anticipate what has already happened.

5. On March 3, 1947, Albert Einstein—skeptical of the emerging field of quantum entanglement and uncertainty—wrote this in a letter to his friend Max Born: “I cannot seriously believe in it because the theory cannot be reconciled with the idea that physics should represent a reality in time and space, free from spooky actions at a distance.”

6. In 1929, the actress Anny Ondra appeared in Hitchcock’s Blackmail, wielding a knife, having stabbed not westward, but forward in time. These are not still images at all. 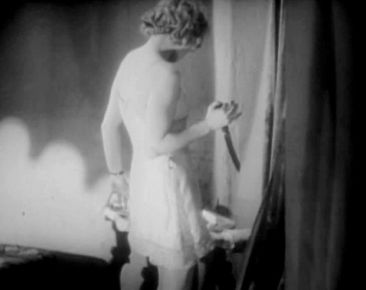