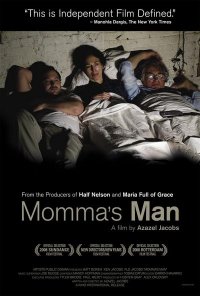 Nick Dawson’s Web Exclusive Director’s Interview this week is Azazel Jacobs, whose third feature, Momma’s Man, opens tomorrow. Of the movie, which details a few days in which a young, recent father, Mikey, travels home to his parents (played by Ken and Flo Jacobs, the director’s real-life parents) and is not able to leave, having become entangled in the crosscurrents of nostalgia for his childhood, Dawson wrote:

…the film is particularly resonant and moving, as well as being funny and tender, and Ken and Flo Jacobs both give surprising, strong performances, despite never having acted before. But it is ultimately Jacobs’ inspired writing and deft direction that make this film so remarkable, his keen eye compellingly capturing the deteriorating situation created by Mikey’s inertia.

You can head over there and read Nick’s conversation with Aza, but I just want to personally recommend that you go out and see this lovely movie this weekend. Momma’s Man is funny, affectionate and also highly unique: it limns an emotional state of mind I’ve never seen captured on film before. Summoning up an odd but quite believable fear-of-adulthood, the film captures a kind of “in between” state that we can all relate to and perhaps even fantasize about. The performances are all wonderful, and Jacobs’ casting of his own parents, who include famed experimental filmmaker Ken Jacobs, gives the film an extra layer of poetry, specificity and subtext. Set not in some suburban sprawl but in a huge yet still impossibly cluttered downtown loft, Momma’s Man becomes not just a particularly idiosyncratic depiction of the 21st century man-boy but also a beautiful commentary on the passing of artistic impulse from generation to generation.

The film opens in New York at the Angelika Film Center tomorrow. Here’s the trailer.