by Nicholas Rombes
in Columns, Filmmaking
on Dec 9, 2011

The still frame, so much like a photograph that it takes a violent deformation of reality to make it move. Jeffrey and Dorothy, frozen eternally in a film that has stuttered to a stop. In John Ashbery’s long poem Girls on the Run, there are these lines:

I’ll go you one better, Fred chimed in, here’s a diver,
let’s call her Josephine, who dives and dives, further and downward,
all our lives’ span, to the basis of that bridge.

Dorothy and Jeffrey have taken the dive that trembles us into fear, and prevents us from following. So we are left with their film images, finally, beautiful and detached and always on the verge of slipping back into motion, the illusion of motion.

The photographer Gregory Crewdson comes at the same problem from a different angle, a Hasselblad Sinar 8×10 camera that allows for a dive into the image that locates the viewer in some haunted space just at the membrane between this world and that. 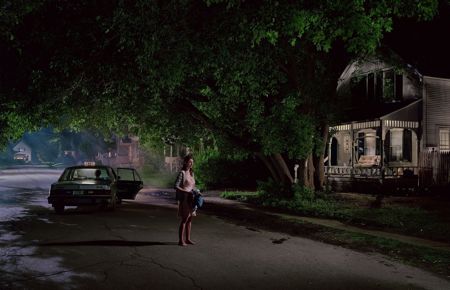 Crewdson himself was a member of The Speedies, the late-1970s power-pop-post-punk group whose handful of tunes constitute a genre of their own. In their song “Time,” the lyrics go “When I’m with you it’s oh so fast / time, time, time / when I’m alone it’s oh so slow.” The image—whether still (a photograph or screen grab) or moving (a motion picture)—is always on the move. Just take a moment to look upon the Blue Velvet frame from second #2444: can’t you detect its sly movement, the way it shifts impossibly beneath your gaze, the way it recalls the before and after of its moment? There is no stillness in the still image because we are not still: fast time or slow, it is still time that carries us—and the image—forward into dark futures.