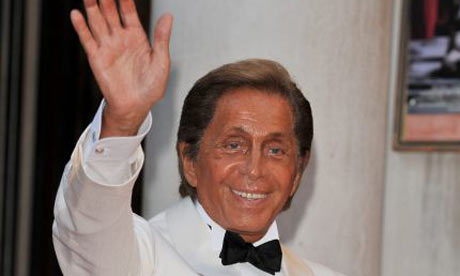 The best laid plans… despite arriving at what I thought was a suitably early time to catch the industry screening of Darren Aronofsky’s The Wrestler, the line halted just 20 or so people ahead of me. Whether it was the Venice win, the Fox Searchlight buy, or just the anticipation of a comeback for both Mickey Rourke and Aronofsky, The Wrestler was this afternoon’s hot showing. And later in the day, another surprise sell-out. Following what I heard was a great public screening, press and buyers packed into this afternoon’s showing of Robert Kenner’s political food doc, Food, Inc. So, rather than these pictures I went instead to Matt Tyrnauer’s Valentino, The Last Emperor, a lovely ode to the great designer and to the idea of European couture in general. What starts out as an unsurprising portrait of a fashion icon who is the last remaining designer to head a house that bears his name deepens as the company stages a lavish 45th anniversary bash while negotiating sales of a majority of shares to an investment group. As Valentino retains his focus on old-fashioned glamour, debating whether to add or subtract ornamentation from one of his flowing dresses, the suits and bankers have other plans. Seeing this film at a film festival, where debate over the future of the industry is all around, I couldn’t help but draw a connection when, in the movie, a fashion editor comments that there’s no money to be made in couture. The fashion shows and designer evening wear just serve to advertise the brand; the real money, she says, lies in accessories and perfumes. Laced with Nino Rota music as well as clips from La Dolce Vita, the film that captured the Rome of Valentino’s early days, Valentino: The Last Emperor is both an insider’s view of the big business of fashion as well as a lovingly respectful ode to a vanishing concepts of artistry and craftsmanship.