Sundance’s Midnight section always includes a fair share of genre-heavy selections, but Richard Bates Jr.’s Excision sounds like it will pack a level of blood and guts rarely seen at the festival. A twisted coming of age tale, Excision follows young Pauline (AnnaLynne McCord), a high school girl with an unabated interest in picking scabs, dissecting road kill, and fantasizing about performing surgery on strangers. Bates’ debut seems to be the sort of grotesque horror comedy sure to play well to splatter-enthusiasts in Park City and beyond. 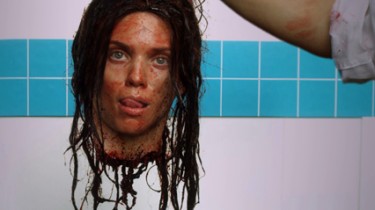 Filmmaker: You’re premiering at a festival not traditionally known for its horror selections.  How do you hope the film plays to audiences in Park City?

Bates: I sure hope people like it. I wanted to make a film that would have had a profound impact on me had I seen it as a teenager. In a lot of ways it’s a film I wish I’d made in high school but didn’t have the guts to.

I’m really happy to be part of the midnight section. I feel very at home there. Excision is very much a midnight movie.

Filmmaker: Another atypical aspect – AnnaLynne McCord’s Pauline is far from a conventional female lead.  How did you work with McCord to develop her character, and prepare her for the filming process?

Bates: I will never forget the first time I met AnnaLynne McCord. It took about a minute for every preconceived notion I’d had about her to go flying out the window. She was thoughtful, passionate, had a deep understanding of human nature and cursed like a sailor. I instantly liked her. When I asked her about the prospect of shaving her head for the part she removed the steak knife from the dinner table and took it to her hair.

We both had something to prove and we trusted each other. After our lunch meeting she had to fly to NYC to do a play. I sent her some strange stuff I thought her character would be into, several movies that influenced me and a Venus fly trap. We’d communicate over the phone and I flew out for a weekend to go over the script once more in person. I got to know her personality and her insecurities very well and rewrote the character to reflect them. We both put a lot of ourselves into this movie. She’s very brave.

Filmmaker: There’s sort of a retro 70s tone going on with a lot of the marketing materials. What were some of your chief influences for Excision?

Bates: As a writer/director the biggest influences on Excision come from David Cronenberg, Todd Solondz, John Hughes and Alejandro Jodorowsky. Also, there’s this French film from the 1960’s called Eyes Without a Face that I love. I screened it for a lot of the crew.  Oh, and Tod Browning’s Freaks. What a beautiful story.  I made every one watch that too!

Filmmaker: What was it like working with John Waters?  Did he lend any creative council in addition to his acting talents?

Bates: I got a call from John Waters after he’d read the script. He said, “Ricky, this is a really strange script.” I wasn’t sure how to respond. He’s one of my all time heroes and I was terrified he was going to say no. Then, after a long pause, he said “…listen, I don’t fly coach and I’m not shaving my moustache…but I’m gonna do it.”

When it came time to shoot his scene, my friend who I’d sent to pick John up from the airport got lost on the way to set. John was really nice about it but my friend was mortified.  Over the course of the ride John had discovered my friend was an aspiring writer and a huge fan of his as well and allowed him to redeem himself by driving him back to the airport. My friend got to his hotel an hour early and the first thing John asked him when he got into the car was if he’d been working on his latest story, “Lost With Waters”.

John was really cool and took a step back as far as creative council went. He’s such an icon he made special care not to try to overshadow me in front of the crew.  Not only did I get to meet one of my all time heroes but I got to direct him in a movie and he turned out to be the nicest guy in the world.

Filmmaker: What’s your opinion on today’s crop of mainstream horror films?  How do you think Saw and Paranormal Activity fans will react to “Excision”?

Bates: You never know. What I can say is that the Excision is based on a short film of the same name that I made that screened at 50 festivals and won 24 awards since 2008. The majority of festivals we won awards at were horror film festivals.  The response was overwhelming. I think genre fans are always on the lookout for interesting, new material. And I should know, because I’m one of those fans. I have an unhealthy obsession with movies in general, but horror movies hold a special place in my heart. They’re the reason I wanted to be a filmmaker to begin with. I’m really proud of Excision. I think if people give it a shot, we’ll win them over.