Dylan Southern, LCD Soundsystem, No Distance Left to Run, Shut up And Play the Hits, Will Lovelace

Over LCD Soundsystem’s ten-year career, the band grew from early blog darlings to lauded indie stalwarts. After telegraphing the group’s demise years in advance, band-leader James Murphy officially disbanded LCD last April with a star-studded, marathon-length performance at Madison Square Garden. Now, less than a year later, Dylan Southern and Will Lovelace present Shut Up and Play the Hits, a documentary that follows Murphy and his band-mates in the run-up to and aftermath of their now-legendary final performance. If the film’s trailer is any indication, Shut up and Play the Hits will serve as a great encapsulation of the excitement, madness, and poignancy of a band bowing out at the top their game.

Filmmaker: When did you first meet James Murphy? And how did you two end up directing this project?

Lovelace & Southern: We first met James in the summer of 2010 through a mutual friend. We’d just finished another film (the Blur documentary No Distance Left to Run) and were kicking around ideas for the next project. We were pretty sure we wouldn’t make another music film straight away, but then the opportunity to meet with James arose. As fans of his band, we were really keen to see if there was a possibility of something happening. We were surprised at how open he was to working together because we knew he had existing relationships/friendships with other directors, but at that point didn’t know us at all. So we were flattered that he even entertained two weird British strangers! But we got on really well with James in those initial conversations and talked over the different possible routes we could take with the movie. The thing we were most interested in was his decision to end the band at a point when it seemed to be hitting its stride. We knew we didn’t want to make a biography of the band. We were much more interested in making a film that was all about that very specific moment in time – that moment when the band ended.

It was only when James told us that they planned to play their final show at Madison Square Garden that the idea began to take shape. LCD is an incredible live band, so it was obvious to us that the final show would be an integral part of the film. We wanted to create a document of that valedictory performance, but we were also keen that it would be more than just a concert film. It was at that point we began talking about ways to build in a narrative arc that worked alongside the show. We kept thinking about how it would feel to end something like that, and questioning ‘why’ you would make that decision in the first place. That was really the basis of our decision to situate part of the story the day after MSG. It seemed like the perfect position from which to dissect James’ decision – the cold light of the day after! It was also a way of combining the spectacle of the show with a much smaller story, which is a contrast that’s at the heart of the movie.

Filmmaker: How intimately was the band involved in the production and post-production process? Did they provide a lot of creative input, or did you two work fairly independently?

Lovelace & Southern: It was a combination really. It was a very collaborative relationship, both conceptually and practically. It was important to James and us that the film was an honest representation of James and the band, and that it approached its subject matter in an interesting and surprising way. It’s the last piece of work associated with the band, so we had to get it right and that required collaboration. But James also placed a lot of trust in us to work independently. James is incredibly into the whole filmmaking process so it was exciting to work with someone who had opinions and wanted to be involved. But the most exciting parts of the collaboration came in the sound mix, he mixed all the live audio so it sounds amazing and in places it is incredibly LOUD.

Filmmaker: The final concert was over three and a half hours long. How did you pair things down for the movie’s hour and forty-five minute running time?

Lovelace & Southern: That was a really tough part of the process. We essentially had to carve out our own set list from the four hour show and it was quite painful to let some of the performances go. There were so many great moments that hit the editing room floor. But that was essential as it was important that the film was more than just a straight concert film. We had to select our moments from the show in a way that was sympathetic to, or in stark contrast with the day after scenes. So there was a relationship between those two elements that allowed the movie to develop a certain emotional pace, or allowed some of the ideas discussed to ferment as the concert continued.

Finding the shape of the movie was a challenge. It’s a difficult movie to pigeonhole, in that it’s part concert film, part narrative. The balance of those elements had to be well-honed and structured in order for them not to feel dissonant. That meant letting some tracks go and being fairly ruthless, but it became obvious what felt right for the story. It had to be a film of contrasts. A large part of it was creating that juxtaposition between James, the guy on stage playing a huge gig to thousands of fans at an iconic venue and James, the guy sat around in his pajama pants, taking his dog to the end of the street, answering his emails. We wanted to find the resonance between those extraordinary scenes and the ordinary or mundane.

Filmmaker: What legacy do you think LCD Soundsystem left behind? How do you think they’ll be remembered twenty years from now?

Lovelace & Southern: That’s an interesting question, and one of the themes we explore in the movie. Part of what the film is about is that relationship between fans and musicians/bands (or the perception of musicians/bands). I think at least part of James decision to end the band now has to do with its legacy. It makes total sense to end on such a high – to have made a body of work that you are proud of. I think for James the band was always a finite project. He talked about ending it after the second album. To carry on for the sake of it, or to create new music just to meet a demand or to pay the bills as some bands do, is to the detriment of the way they are remembered.

In the film it’s clear that James retains a little uncertainty about having made that decision, but ultimately I think stopping now cements the bands legacy. I think LCD will be well remembered. You only have to see the reactions of the fans in the audience at MSG to realize what that band meant to people. That night was so emotionally charged and atmospheric, there was a genuine sense of grief in some people, and you just can’t imagine that level of emotion with a lot of bands these days.

Filmmaker: Do you have an all-time favorite music doc? Were there filmmakers or films especially influential to Shut Up and Play the Hits?

Lovelace & Southern: We have loads of favorite music films, but I guess the one that I’ve (Dylan) watched the most is Gimme Shelter. I think the Maysles brothers were stunning filmmakers, and Gimme Shelter (like all of their work) is a film that transcends its immediate subject matter – the events that unfolded at Altamont were the perfect storm for filmmakers like them. The oppressive brooding atmosphere that builds is more affecting to me than a lot of horror movies! We’re huge fans of the vérité /direct cinema style of that era but our film is a lot different from that.

In terms of films that directly influenced Shut Up and Play the Hits, we’d say we were inspired rather than influenced. A large element of this film is the concert, so it’s hard not to think of the watermark movies of the concert film genre (The Last Waltz, Stop Making Sense) and our intention was to capture the show in a way that was as authentic to its spirit and atmosphere as those movies were to the events they documented. For us that meant keeping it quite real, not relying on anything too gimmicky and capturing it from perspectives that one might actually see a show like that from (a fan in the crowd, a friend at the side of stage). We just wanted to make it as experiential as possible.

At some point in the future we hope to put out the four-hour concert in full (we’re still cutting it) and our hope is that it can be screened in interesting spaces and that fans will get to relive the concert and dance again! 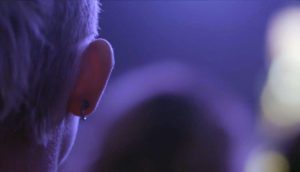