Learning from Your Peers at the Sundance Producers Brunch

by Scott Macaulay
in Festivals & Events, Filmmaking, Production
on Jan 22, 2012 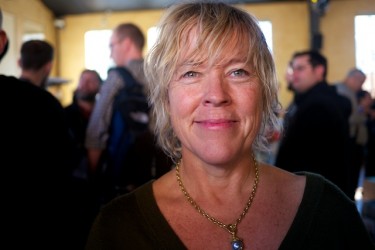 “Work from your most generous place,” producer and keynote speaker Sarah Green advised during today’s annual Sundance Producers Brunch at the Sundance Film Festival. Green has had an amazing year, producing the works of masters old and young (Terrence Malick’s Tree of Life and Jeff Nichols’ Take Shelter), but her speech focused not on her accomplishments but on the sustenance provided by her web of professional associates and collaborators. She laughingly described her own beginnings, watching “Maggie Renzi get City of Hope financed over lunch. I thought it was easy.” She talked about mentoring the producer Georgia Kacandes from APOC to POC to UPM, learning, in the process, “not to micromanage.” Indeed, in a field in which becoming a veteran is as much about keeping up with new technologies, shifting production landscapes, and youthful energies, her advice to “learn from your trainees” was especially apt. “Form a producers group,” she suggested to the audience of both established and new producers. “Within an intimate group you can be even more generous. Make it a priority, because that’s how we’ll survive.” 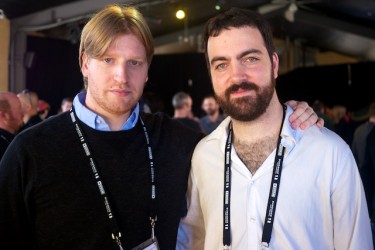 Following Green’s speech the brunch — moved this year from Kimball Art Center to the expansive Studio next to the Library Center — initiated something new: the Sundance Institute Indian Paintbrush Producer’s Award, given to producers whose film had been developed in the Sundance Labs. The award came with $10,000, and the deserved winners were Dan Janvey and Josh Penn (pictured, with Janvey at left), whose Beasts of the Southern Wild is an astonishing producing achievement. My favorite film of the festival so far, it features sequences that cause your jaw to drop involving not only first-time director/producer no-nos like children and animals but also water, pyro, CGI and non-actors. Perhaps more to the point, Janvey, Penn, director Benh Zeitlin and their team imagined and then created a production process embodying the sense of invention and love infusing the film itself.