Musa Syeed’s Valley of Saints is a film warmly awash in setting and culture. Filmed in Kashmir, within the aquatic trading community of Dal Lake, Valley follows Gulzar, a young ferry driver who dreams of moving out of Kashmir, until the arrival of a beautiful American scientist begins to complicate things. Pairing with producer Nicholas Bruckman, Syeed’s first narrative effort patiently probes into a fascinating community (and part of the world) rarely seen on the big screen. 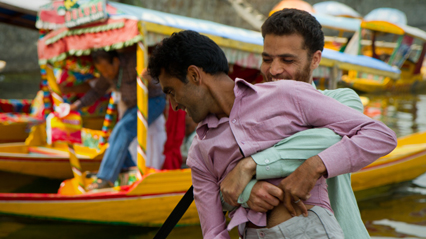 Filmmaker: What inspired you to make a film set in Kashmir?

Syeed: Both my parents were born in Kashmir. In the 1960s, my father was jailed as a political prisoner for participating in the Kashmiri independence movement. After being released and immigrating to America, where I was born, he was mostly silent about his previous life in Kashmir. We weren’t raised speaking the language, and we didn’t visit our family still living there. So Kashmir became an almost mythical place for me.

As happens with a lot of first generation Americans, once I became an adult I felt the urge to go back to my parents’ homeland. I was searching for all the usual things: my roots, my place in the world. But I also was just curious to know what day-to-day life was like in Kashmir. Whatever I saw in films or in the news was solely about the political situation, but I didn’t hear many personal stories. So, it was always hard for me to wrap my head around the place.

As a filmmaker, I wanted to find a story that helped audiences–and really myself–emotionally connect with a place overshadowed by conflict.

Bruckman:  My mother is Indian, and took me to Kashmir for the first time when I was 15. At that age, it seemed like a paradise on earth. Later, as a student, I made a documentary there which followed activists fighting for justice for the tortured and disappeared. When I first read Musa’s script, I fell in love with its unique approach to exploring the unthinkable tragedies of war through its effect on our relationships with each other and with the earth. It is a powerful and timely portrayal of beauty emerging in the least expected of places, and resonates far beyond Kashmir.

Filmmaker: When did you first come across the beautiful aquatic community of Dal Lake?

Syeed: There was a gap of twenty years between when I first visited Kashmir as a young child and when I returned as an adult. Within that time, whatever I heard about Kashmir was either news about the conflict or my parents’ memories of how beautiful it was. They had particularly fond memories of Dal Lake, with its houseboats, floating gardens, and surrounding mountains.

When I finally got to see it as an adult, it was still stunning. I thought it would make a great setting for a film, but I needed to go deeper if I didn’t want the film to just be a postcard.

What really interested me was the unique community of boat people on the lake.  Living on houseboats or man-made islands, they make their livelihood from lake fishing, growing vegetables, and rowing around tourists. I set out to get to know this community, even though I didn’t have any contacts with them. I spent the summer before production just visiting the different tourist boat stands. I don’t speak Kashmiri, but the boat men speak great English, having interacted with lots of tourists. Eventually, from my persistence, I made some good friends. I think it was a combination of them taking pity on what they saw as a confused Kashmiri kid with no sense of his roots and that I took more than a passing interest in them.

I ended up living with one boatman in particular, Gulzar; rowing the boat with him, eating with him, sleeping under the same mosquito net with him. We became good friends, and at the end of the summer, I asked him to be the star of the film. He always struck me as an expressive, sensitive soul who put his heart into everything he did. He agreed to be in the film, and his performance was really outstanding. More than a lead actor, he was the gateway to understanding and appreciating life on the lake–and in Kashmir in general.

Filmmaker: How much of your story came out Dal Lake?  How did its geography and culture affect the story you wanted to tell?

Syeed: I really wanted the story to be authentic to the place, and reflect it in form and content.

I did find the lake beautiful, but when I looked below the surface, there were some not so pretty truths. Raw sewage is being pumped into the water and people are continually encroaching onto the lake with new homes and hotels. And the way that I saw the Dal was different than people who knew it growing up. It used to be the sought-after setting for Bollywood films (not to mention for my own parents’ early days of romance), and I heard stories of how my uncles would swim in its clear and clean the water–even drink from it. Now, people were afraid of disease.

A sense of faded glory, of loss, hung over the whole lake. In a lot of ways it was a reflection of Kashmir as a whole. It was a place once vibrant with art, culture, and civility, now known for being overrun by corruption and conflict. But rather than take on a negative tone, like most stories about Kashmir, I wanted to tell a story of hope. Resilience was the central idea that emerged–that great beauty can survive in the face of destruction, and while we can never fully recover what’s been lost, we can at least nurture what remains.

The still, calm water of the lake inspired a more poetic, lyrical visual style to the film. Having a sense of naturalism and authenticity was important to me, so that audiences could see and feel the reality of our setting. Being that our small crew all came from documentary backgrounds, we were pretty comfortable working in a mostly uncontrollable environment. I think that spontaneity gives the film a real liveliness.

Filmmaker: Were there unanticipated problems or limitations that arose due to filming in a country as volatile as Kashmir?

Bruckman: We had been warned that it would not be easy to film in Kashmir. Filming permits and bureaucracy in India are difficult in general, and Kashmir is probably your worst choice of shoot location. Amazingly, we were granted permission to shoot there with a variety of restrictions. However, our permission document meant little once we hit the ground.

As filmmakers, we dealt with what Kashmiris deal with every day: stone-throwing protesters, city-wide strikes, military curfew, police corruption, and of course, a pervasive climate of fear.

Just like the characters in the movie, we had to break the curfew and sneak into the dangerous city at night to shoot the smuggling scenes. Many of the gun shots and tear gas firings in the film’s soundtrack are live production sounds, going off in the distance from where we were shooting. I recorded sound, and during some of these scenes I would hear the actors heartbeats quicken through their wireless microphones. Our actors grew up in this world, so if they were scared – I knew I should be too.

We got used to going through entire weeks where even basic supplies could not be purchased, but some days were more problematic than others. One evening the secret police followed us to where we were staying, demanded our passports, and told us we were to leave Kashmir immediately. As our dreams of completing the movie faded before our eyes, our PA whispered to me that this problem could be fixed with 1500 rupees ($30).

Ultimately, these dangers infused their way into the story, performances and atmosphere of the film, and created a deeply authentic experience of the place and time. In our rough cut screenings, often the first reaction from both Kashmiris and Americans is: “it’s so real.”

Syeed: The film will probably be the first introduction many Americans have to Kashmir. Dal Lake in particular is really a whole new, never-before-seen world, so I think audiences will be interested to discover it.

Rather than explain the politics, I thought it would be more important that audiences unfamiliar with the region be immersed in daily life, through familiar characters. So, the film really focuses on very human, universal themes–love and hope. I think US audiences will find a lot of parallels to their own lives, while being able to explore this new place.

For Kashmiri audiences, I think the film’s positivity and broader approach to looking at Kashmiri life will be a welcome change to the way the valley is talked about. There have been a lot of sad, bleak stories, so I think there’s room for this one. While I may be a bit of an outsider, I don’t think the film’s message of hope is simply my own. It’s a reflection of the resilient people I met in Kashmir. If the film can chip away at some of the cynicism, I’ll be happy.