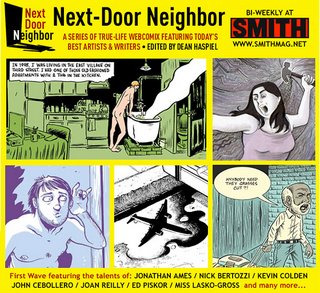 Premiering on Babelgum today is a new doc web series, “Radar,” created by a number of people familiar to readers of Filmmaker magazine. The Workbook Project’s Lance Weiler, whose “Culture Hacker” column will begin appearing in the next issue of Filmmaker, produces, Alex Johnson directs, and the d.p. is Tom Quinn, one of our “25 new Faces” for his feature The New Year’s Parade. The Workbook Projects Lab series looks at creators who are exploring new forms of storytelling in their work, and here’s what the series’ site says about the debut piece, “Next Door Neighbor”:

We all have a next-door neighbor and a next-door neighbor story. With this realization in mind – comic book artist, Harvey Pekar collaborator and founder of webcomix collective ACT-I-VATE, Dean Haspiel approached storytelling site SMITH magazine. The result: a yearlong anthology of diverse, shocking and heartfelt true-life webcomix published biweekly by both emerging and celebrated writers and artists. We visit Dean, and contributors Joan Reilly and Joe Infurnari, at their communal workspace deep in industrial Brooklyn and discuss the importance of place and community – real life and virtual.

Watch the film at Babelgum here.