Is Lena Dunham about to change television? Recent years have seen big-screen critical darlings like Michael Mann, Martin Scorsese, and Diablo Cody make the pilgrimage over to the small screen. But last year’s announcement that the 25-year old Tiny Furniture director would be masterminding a new series for HBO seemed a more direct link between the indie film and TV industries than had been attempted previously. And as if cementing this link, Girls premieres today with a special sneak preview screening at SXSW – the festival that initially launched Dunham’s career.

Audiences are in for a treat, as Dunham’s wit has only grown more acute over time. A continuation of the 20-something angst that Tiny Furniture mined so hilariously, Girls re-teams Dunham with her Furniture co-star Jemima Kirke, as well as new additions Allison Williams and Zosia Mamet for a comedy about four friends trying to survive an extended adolescence in New York.

The serialized format perfectly complements Dunham’s frank, charming style, allowing her an extended platform to continue to hone in on the absurdities and tribulations of transitioning towards adulthood. It’s rare to find a director so young with a perspective so well-defined, and if the first three episodes are any indication, Girls should continue to establish Dunham (as she puts it in the series first episode) as, “the voice of a generation… or at least, a voice of a generation.” 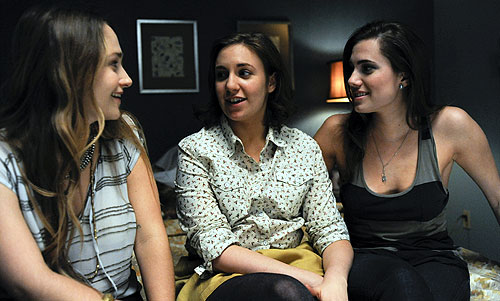 Filmmaker: Are you thinking about the medium of television differently from how you think about film? Are there specific TV shows you’re drawing inspiration from?

Dunham: I’ve been lucky in that HBO is an incredibly free place to work, and I have collaborators who are open to and enthusiastic about doing TV a different way. So I’ve kept a lot of “features-y” ideas and working methods, but have been learning the fine art of sustaining a season(s) long narrative. The TV shows I adore and reference are as wide ranging as Mary Tyler Moore and Strangers With Candy.

Dunham: The show and the film both explore that specific in-between space (not a girl, not yet a woman) because, after finishing Tiny Furniture, I wasn’t done living it OR writing about it. But there are distinct differences. For instance, Girls isn’t about native New Yorkers. This may seem like a minor distinction but it really affects the way the characters approach the city and the reasons that they’re there.

Filmmaker: How much of the writing process is a collaborative effort? How do you brainstorm and workshop ideas?

Dunham: I have an amazing writing staff and a very collaborative process with Judd Apatow and Jenni Konner, my executive producers. We talk about arcs, tell personal stories and then Bruce Eric Kaplan, another EP (who also happens to be a New Yorker cartoonist) writes it all out on the board, often with pictures. But sometimes you just have to get into a room alone and hash it out- that’s when the emotional stuff happens for me.

Filmmaker: One line from the pilot struck me as something of a mission statement – your character explains to her parents, “I’m trying to become who I am.” What are your long-term goals for the series? How concrete a plan do you have for where you’d like these characters to go?

Dunham: That’s completely what it’s about- not to sound too hippied out but these girls are working on self-actualization. Though obviously it’s not a tidy journey, and it’s two steps forward then three back. So if we’re allowed to continue making this show, they’ll keep working at it, and the various markers and questions of twenty-something life will keep arising (they aren’t even a quarter century old yet, these gals!) I have my fantasies about where they are way down the line (a vision of fifty-year-old Hannah taking the train into the city from her house upstate to meet with her publisher has comforted me before), but their stories are constantly surprising me.

Filmmaker: You’ve enjoyed such a meteoric rise these past few years, is it ever a struggle to relate to characters who are still working internships, and who’ve yet to find much creative success?

Dunham: I’ve had a lot of amazing opportunities, but really what I do best is to keep my head down and work. Then when I do come up for air, I’m just as confused as ever. So Hannah and her friends still make perfect sense to me.