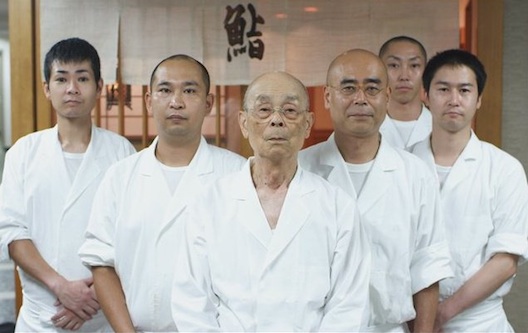 by Brandon Harris
in Director Interviews
on Mar 7, 2012

Jiro Ono, the world’s most acclaimed sushi chef, is not one to rest. As hard working an octogenarian as you’re ever likely to encounter on screen, Jiro is a celebrity in Japan, but little known here in the States. That is likely to change thanks to director David Gelb’s portrait of the man, his two sons and the philosophy of diligence, hard work and perfectionism they demonstrate in Jiro Dreams of Sushi.

A hit at last year’s Berlinale and Tribeca Film Festival, it depicts the rigorous work ethic that Jiro, who began making sushi professionally shortly after World War II, insists upon from himself and his staff of apprentices. Captaining an incredibly small restaurant that seats less than a dozen, only serves sushi and requires reservations up to a year in advance, Jiro has passed on his passion for sushi to his two sons, both of whom are budding sushi chefs themselves.

Gelb, who studied film at USC, first became obsessed by sushi as a youngster when his father Peter, the manager of the Metropolitan Opera, would take him on business trips to Japan. The now 28-year-old director co-directed the short Lethargy, starring Robert Downey Jr. and Edward Burns, with Daddy Longlegs co-director Josh Safdie when they were both just 18 years old.

Jiro Dreams of Sushi, which is being distributed by Magnolia Pictures, opens this Friday in Manhattan. 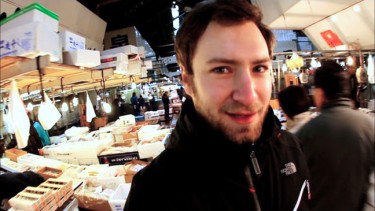 Filmmaker: You’ve said elsewhere that you initially set out to make a documentary about sushi culture. How did you end up focusing solely on Jiro?

Gelb: I started out shooting little test segments, feeling out the style of the film and also hoping I might be able to raise some money with them. I shot a short on my favorite L.A. sushi chef Nozawa. He actually just retired last week. That was kind of a big deal — I don’t know if you saw the huge piece in the Times about Nozawa?

Gelb: He’s one of the most interesting sushi chefs in the United States as well as one of the most skilled. Maybe a couple years ago in 2009 before I started the film about Jiro with full steam, I shot a five-minute clip of him. I thought I’d use him as a character in the film. But when I met Jiro and his son I began to realize that the movie should be about a person and his human story set in the world of sushi. It was no longer a movie about sushi; it became a movie about family, succession and a philosophy of hard work.

Filmmaker: But initially you wanted to make a film about the sushi industry?

Gelb: I wanted to make a film about the art of sushi as told by a few different chefs. Everything I wanted to convey about sushi I could easily do through Jiro. He is the true living legend of sushi. The undisputed sushi God. To have access to him and to be able to tell his story became incredibly compelling as the movie became about much more than sushi.

Filmmaker: It sneakily becomes a very personal film over the course of the running time, even though we don’t glimpse his home life or his wife.

Gelb: I think we were both, Jiro and myself, surprised by how personal the movie became. I knew I wanted it to be about him, his work and philosophy about sushi and life, but it was only in the editorial stages that I realized how much it was going to be about his family and his own personal history. The reason for that is that I think it makes the sushi making even more emotional when it’s put in the context [of his life]. For example, the scene with the egg sushi — we depict one of Jiro’s apprentices talking about his journey toward making the egg. He was there ten years before they even let him try it, and then he had to do it 200 times before they said it was correct. Then when you see the egg being placed on the plate, you feel the emotion and drama that went into making this piece of sushi. I think that’s the kind of feeling that makes the movie special.

Filmmaker: Were there aspects of his process as a chef and an artist that surprised you?

Gelb: Oh sure, I was surprised constantly. The first thing that I was surprised by is how important rice is. I knew that sushi was about the combination of the fish and the rice, but I didn’t realize that the rice was of equal importance as the fish. Jiro made a big point of emphasizing how important the rice is. When you eat his sushi, you realize that the rice is what makes the fish delicious and that a tremendous amount goes into striking the right combination and balance between the two. It took him 60 years to perfect this balance. All these elements of mastering every single little ingredient was surprising.

I was also surprised by the extent of the collaboration and the trust he has in his fish vendors and apprentices. He’s a great teacher. He takes center stage at the sushi bar, but there is a huge amount of work that goes on at the fish market, where the fish vendors are sourcing the absolute best ingredients for him, to the apprentices in the kitchen who are working from seven in the morning and even earlier if they have to go pick up the fish at the market. They are working incredibly hard every single day. He’s presenting 20 pieces of sushi, but those are 20 dishes that require incredible amounts of preparation and ingredient sourcing. A lot of this is overlooked. It looks effortless and magical at the bar, but there is a ton of work that goes into it.

Filmmaker: The scenes at the fish market are some of the most memorable in the film. Was there material like that, which you shot outside of the story Jiro and his family, that you had to do away with as the cut evolved and the film became more about them?

Gelb: Oh, sure. I shot 150 hours of footage. We made an 83-minute movie. Choosing what to include in the film was the hardest part. I was lucky to have an incredibly talented editor who was really able to help me sculpt a story out of all this footage. What we discovered is that if we did too much sushi information, the audience would begin to disengage — only hardcore food aficionados would remain interested. But if we continued to examine him as a person, then some of the people are left wanting more information on what makes the sushi so special. So what we had to do in the editing when it came to presenting information about the process of actually making the sushi was do it in a context that would build Jiro’s and Yoshikazu’s characters. When the octopus is massaged, we included the detail about how the octopus is massaged for an hour because that’s a reflection of Jiro’s character; he is such a perfectionist that he goes to incredible lengths and does an incredible amount of labor to get the fish tasting as good as it does.

We also wanted to surprise the audience and debunk certain myths about sushi. For example, a lot of people think that otoro is the most prized part of a sushi meal, but as you learn in the film it’s actually the leaner cuts of tuna that have flavor, whereas the fattier cuts of tuna just have the taste of fat. There are some other points in there that we kind of sprinkled in. It was really all about using food information as context for character. We had to cut a lot of great scenes that, fortunately, we will be able to include as deleted scenes on the DVD. We really wanted to make it a story about a person who has a very compelling perspective and has an interesting family story. The very detailed, meticulous but dry sushi information we’re still going to be able to include on the DVD, but we include the most important elements of sushi making in the film.

Filmmaker: How has the Fukashima tragedy effected Jiro’s business?

Gelb: It’s affected it on multiple fronts. Things have become a lot more difficult for them. Not only is it harder to get ingredients, but prices have gone up because a lot of the fish suppliers were completely wiped out by the disaster. The atmosphere of uncertainty regarding the nuclear disaster and the damage to the economy it has caused has dented his clientele significantly. For Yoshikazu, it is a real uphill battle because not only does he have huge shoes to fill but because it’s harder to get ingredients. They are more expensive, and there are also fewer customers. But they are not going to let it stop them. Jiro and Yoshikazu are still in the bar every single day, except for Sundays, making sushi for their customers.

Filmmaker: In terms of their position in the world of sushi in Tokyo, are there any other chefs that compare to Jiro?

Gelb: Absolutely. Jiro is widely regarded as the world’s greatest sushi chef. Still, you know, people argue that Kobe Bryant is better than Michael Jordan was, but not everyone agrees with it.

Filmmaker: With good reason. I don’t hear a lot of people arguing that. [laughs]

Gelb: Okay, not a lot of people argue that, but some people do.

Gelb: Certain Lebron fans think he’s the greatest, although that may have been before he left the Cavs. Anyways, Mizutani, who is in the film, he’s the one who says that Yoshikazu will have to make sushi twice as good as his father to be perceived as equal. He’s another three-star sushi chef in Tokyo. He cut his teeth working with Jiro. They worked together for at least 20 years and then he went and started his own restaurant. Some people argue that Mizutani is better than Jiro. There is also a restaurant called Kube that is a five-story sushi bar and the more that you go there and the more they know you, you get to go up the floors of the restaurant. If you’ve been going there a very long time, you get to go to the top floor and be served by the master chef at the restaurant. It is a different type of restaurant and it focuses more on appetizers, whereas Jiro only does sushi. So there are different styles. A lot of it has to do with personal taste. It is all a very subjective experience. For me, having eaten at all these restaurants, I can confidently say that Jiro’s is the best.

Filmmaker: How did he respond upon seeing the film?

Gelb: We invited Yoshikazu to Berlin. We would have loved Jiro to come as well, but unfortunately he doesn’t travel anymore because of his health. We sent him the DVD and didn’t hear back for awhile. Finally we did hear back. They approve of the movie. They are such perfectionists that just approval is an incredible compliment to me. Yoshikazu did end up coming to the premiere at the Berlinale last year. That was a gesture on their part to show that they approved of the movie and want people to see it, mostly because they want people to know about this pure style of sushi so that people around the world can appreciate it more.