GIVING AWAY NORTH BY NORTHWEST 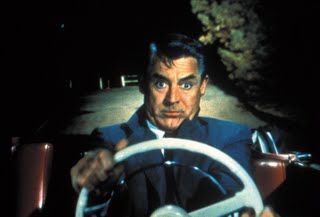 The good folks at Warner Bros. Home Video have offered three copies of the new North by Northwest 50th Anniversary Special Edition to DVD to Filmmaker readers. Available in Blu-Ray and DVD, the disk contains two new documentaries: “The Master’s Touch: Hitchcock’s Signature Style” consists of interviews, clips, and behind-the-scenes footage discussing the key elements of Hitchcock’s filmmaking. In “North by Northwest: One for the Ages,” directors Guillermo del Toro, William Friedkin, Curtis Hanson, and Francis Lawrence share their interpretations on the film’s importance and its influence on their own work. The Blu-ray Book also contains 44 pages full of photos, film facts and ‘insider information.

North by Northwest is newly remastered in 1080p from the original VistaVision elements. From the press release:

The arrival of North by Northwest on Blu-ray is a landmark event in home video history, as it marks the very first of the famed director’s films to become available on this state-of-the-art format. Accordingly, the film has received a meticulous restoration and remastering especially for this occasion with Warner Bros. Motion Picture Imaging scanning the original VistaVision production elements in 8K resolution. The resulting presentation reveals a depth of field and clarity never before possible, only serving to heighten every thrill-packed moment of this beloved classic.

I’m not going to come up with a brainteaser for the question. Any fan will have no problem with this one:

North by Northwest contains a chase sequence that is considered one of the best in movie history. What is Cary Grant chased by?

Email your answers to me at editor.filmmakermagazine AT gmail.com, and the first three correct respondents will win the DVD (the standard def version) of this classic tale of mistaken identity and Cold War paranoia.

UPDATE: We have our winners! Congrats, all.