Outrage the Rooster!: Words About This Film

by Jason Guerrasio
in Filmmaking, Post-Production
on Apr 29, 2008

The following essay by David Gordon Green on Todd Rohal’s The Guatemalan Handshake accompanies the film’s DVD release from Benten Films out today.

I am plagued by two mothers of frustration:

1. POWER PROBLEMS: Who controls the switches? Who pushes the buttons? How do I get to be large and in charge like Arsenio Hall’s portly alter ego Chunky A?

2. LOST AND FOUND: Why did you leave? Where did you go? Or have I just forgotten where I put you?

Todd Rohal’s first feature length movie The Guatemalan Handshake revolves around these issues through a series of characters and events that result from a meltdown at a power plant in an anonymous city, USA. We meet people with funny names and see images that make us laugh and snap the elastic of our underpants, but the root of this film’s strength is the sad beauty of loneliness and loss that sneaks inside our heads when we lose our power. Goddamnit… this feels like a review. 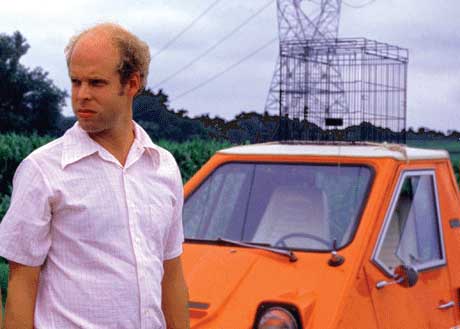 Let me back up…

I saw a short film of Todd’s several years ago. It was called Hillbilly Robot. It presents a sideshow of people in the foreground pulling forth the background of landscape and industry that created them. It is laugh-out-loud funny, but with a sting of subtle cultural commentary that left me with as much meditation as amusement. A producer friend of mine, Nick Panagopolous, introduced me further to Todd’s work and told me with excitement of his collaboration on what would be Rohal’s first feature endeavor. I was as eager as an evening boner to see what would result from the guy whose work struck such a chord with me in its short form.

Anyway, a year or so later I had the privilege to see The Guatemalan Handshake. It woke me up like an injection of creatine on a morning when I was dealing with my own professional frustrations. It reminded me of the courage and hunger it takes to get anything distinctive going these days. It was inspiring because it was simultaneously genius and idiotic and IT GOT MADE. It was a gift. I literally felt like someone had created a movie speaking magically to each of my sensibilities. With its humor and pathos, consideration of beauty, and attention to sound and music, I immediately embraced the movie. Yet at the same time, I had a queer anxiety in my stomach that in fact the movie was “too good,” or should I say “special,” like a retarded kid who is enchanting and liberating in his or her world view, destined for a conflict with the traditional culture. This is a time in the movie marketplace where people love “safety with a twist.” Exposition sells! Spell it out for us! Give us marquee value! How about a neat-o ending with a splash of wish fulfillment?! We love to see a movie that is pretty much like every other movie we’ve ever seen, but a little different. Just look at the shelves of your local video store. Never too bold. Not too distinctive. Avoiding risk like an STD. Zero innovation or even ambition from the concept to the cover art…. Tell us when to laugh and where to cry, right? Let’s lift our voices and cheer for those annual “independent cinema breakthroughs” that are nothing more than the poor man’s version of some bullshit studio retread. Everyone can make movies. It’s easy! Let’s spend time with garbage that is cheap and pretentious and precocious, and give our mothers indie credibility with the possibility of a screenwriter’s quirky quips and obtuse mediocrity!!!

Well, my friends, I suggest you take all of your clothes off, pull your head out of your ass, unfasten your sofa seatbelt, push back the furniture, lay down some newspaper or a drop cloth to protect your personal items, pour a salty beverage and stand akimbo to watch The Guatemalan Handshake. This movie NEEDS your attention. Watch it and then watch it again. Break things. Sing songs. Blow your nose. Stuff needs to come out of you as a result of this experience. If not, it’s cinema’s funeral.

No plot synopsis or critical analysis could do this film justice. No tagline or distributor’s coverage breakdown could be anything less than annoying. In fact, any literary discussion or representation (including that of this naive author) can only reflect the desperate bewilderment we have at the subconscious power and frustration of this movie. The Guatemalan Handshake is a confident vision of the absurd, but it never crosses the line of being weird for weird’s sake. It rises to the occasion of inspired filmmaking playfulness in ways of the pioneers: Fritz Lang, George Kuchar, Jacques Tati, Robert Downey Sr. and Alejandro Jodorowsky. Its heart is never lost in its humorist roots. Each technical contribution is far above the requirements of low budget filmmaking. It raises the bar and illustrates what can be done if smart people get in a room and decide to become the band that sets the new standard rather than dry humping the Top 40 countdown. Nothing feels cheap nor compromised. Performances are either naturalistic and highly believable, or perfectly stilted in the caricatures of the modern day fairy tale. It juggles a unique structure and is equipped with transitions that open gateways to other plots and sequences that we can only assume exist in this alternate reality. This is a movie where we drop into people’s lives without explanation and see them at their most vulnerable. It is as insightful as it is ridiculous. Human moments of awkward connections and missed opportunities and life-changing failures are on display in glorious 35mm widescreen. This film is about the beauty within the buttcrack and the sadness behind a fart joke.

One of the ironies of this film about loss and loneliness has been its own lack of recognition. A film that a Variety critic referred to as “commercially toast” managed to fulfill this narrow-minded prophecy and have its discovery be limited for those audiences hungry for an alternative to more obvious festival favorites and niche market narratives. Todd and his troupe of collaborators and newfound followers have taken to grassroots exhibition and underground exploitation of their film. As heartbreaking as it is to see quality cinema lost in the power outage of the industry, it falls honorably in line with our forefathers in the lineage of innovative art. Subject now for discovery by ancillary markets, alternative distribution, word-of-mouth recommendation and happenstance exposure, I predict that this film will not only endure the savage bitch of festival rejection and media neglect, but will find itself the harness of inspiration for artists to come. Midnight movies, reference in rap lyrics, fashion accessories, and post-posthumous appreciation will define the life of this undersexed whore of a film that lies spread eagle for every passerby as a DVD on dorm room shelves and downloaded in the culinary kitchen of cinematic connoisseurs. The cult of recognition will bloom large and in charge as future shenanigans from Rohal and friends awaken the unaware and this fat freckled orphan of a film finally finds a home.