Inside a Three-Minute Film Competition 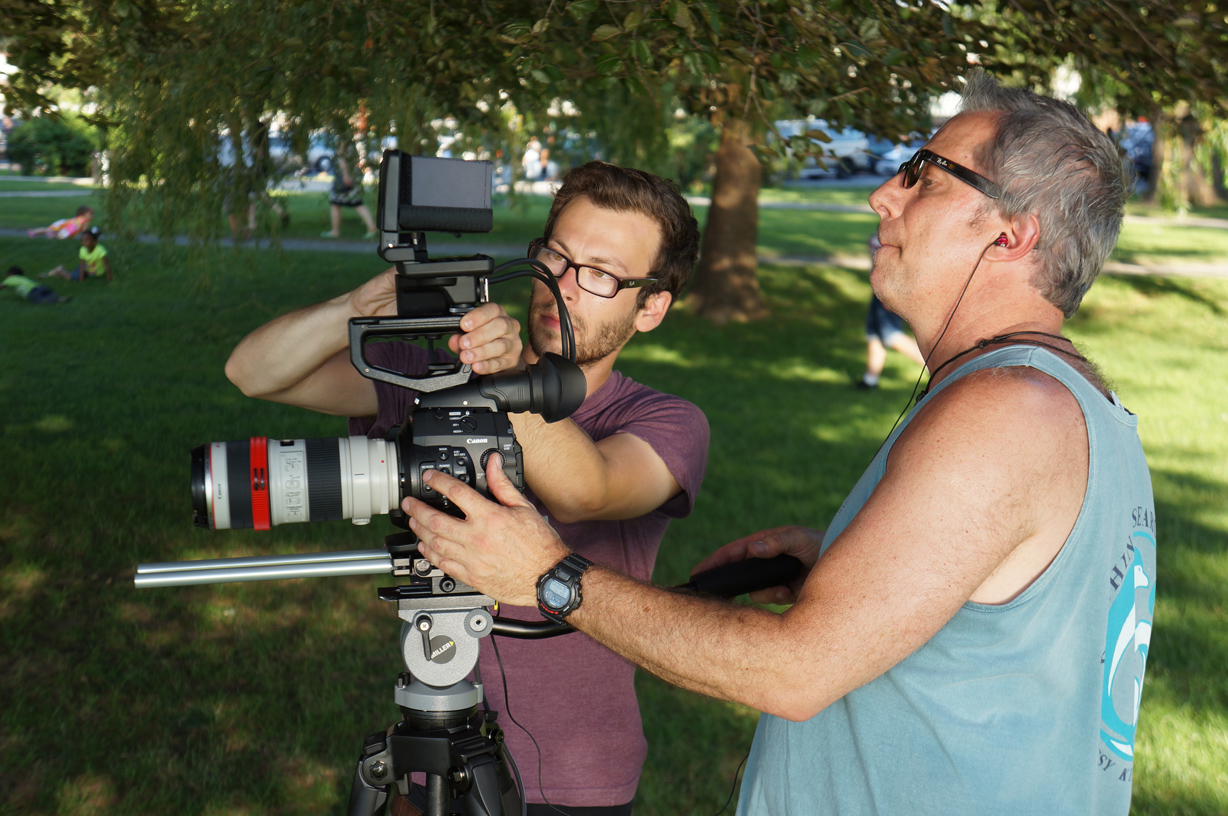 by Michael Murie
in Cinematography, Filmmaking
on Jul 18, 2012

On the first Sunday of July, a group of filmmakers gathered at the Salem Willows Park in Massachusetts to participate in a Three-Minute Film Challenge. The brainchild of local d.p.s Rick Macomber and Paul Antico, the event was as much a gathering of enthusiasts as it was a competition.

“I was watching a 48-hour film fest,” says Rick, “and I had an idea that maybe we could do something like this, with a group of people, and [a film length limit of] three minutes. I’d never tried anything like this, and it was my first narrative attempt.” 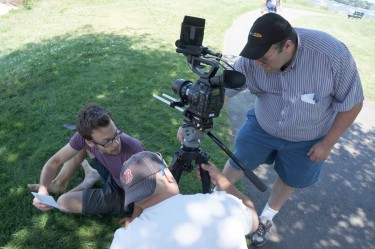 “We’d talked about wanting to shoot more stuff that we could put on our reels,” adds Paul, “and not having the time to do it with our regular jobs. And then Rick said, ‘Well what if we get everybody together and did a challenge?’ I said I wanted everybody to be involved, I didn’t want to just have him and I make a movie. Just something quick and easy that takes one day, that is still challenging and exciting.” 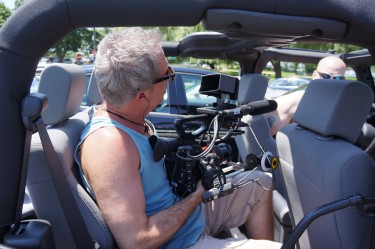 Another difference was that Paul’s company, Anticipate Media, provided a Canon C300 and a large collection of Canon lenses for the shoot, and the original goal was that everyone would be shooting with that camera.

Freelance videographer/filmmaker Sean Meehan had connected with Rick just two months earlier when Jared Abrahms had retweeted that Rick was looking for a shooter to assist on a documentary. For this event, “Rick put out that he was looking for some actors,” said Sean, “and I responded to him on Twitter asking, ‘What age range are you looking for? I might have some people.’ He told me the age range, and then in the second tweet right afterwards he said ‘Also, do you want to work with the C300 in a little while?’, and I jumped at it.” 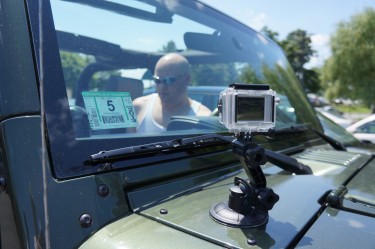 Eleven a.m. on Sunday morning found Rick, Adam Kerchman, Aaron Strader, Matt Stapleton and Todd Mahoney gathered and waiting for the camera. Paul arrived shortly afterwards, and they quickly claimed a location under a tree and piled a surprisingly large mountain of gear under it. With multiple cases, bags, a cooler, and Todd waving a GoPro Hero on a painter’s pole, it did, as Rick noted, resemble “a fishing trip for geeks.”

Having a home base was a mixed blessing; it meant there was a place to store things that weren’t being used, but also that someone had to stick around guarding the equipment. Todd Mahoney turned out to be particularly useful, having brought a wide variety of supplies, as well as drinks in a cooler. I think he’d win the award for best prepared. 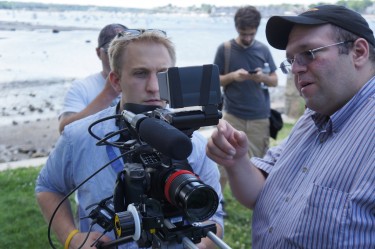 Another problem soon became evident. The plan was to shoot everything with the Canon C300, and to shoot three, maybe four projects. But that was an ambitious amount of shooting. Yet there was also a fairly large crowd of people available, who weren’t always that busy. If there had been two – or three cameras – a lot more could probably have been shot.

Before starting, Paul gave a quick run-through on the operation of the C300 for those who hadn’t used it before. “The peaking is not great, but the magnification is pretty good. White balance is the one weird thing on this; it’s a pain in the ass. It’s like four button presses.” There were also some important casting questions to be answered, like “Did you bring clothes that you can get blood on?” 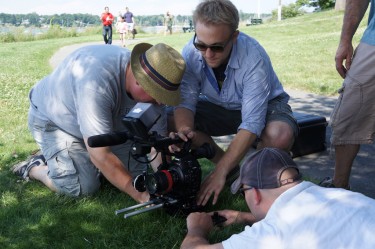 Todd Mahoney, Sean and Matt set up the slider

With the order of production decided, Rick and Matt drove off in Matt’s Jeep to shoot a driving scene, while Paul blocked out some shots on a bench overlooking the harbor. After an hour or more had passed, there was some concern about what was taking Rick and Matt so long. When they got back Rick explained that they had a lot of problems with wind noise on the microphone while driving in the convertible Jeep. Then, when they went down some side roads to avoid the wind, the roads were so rough they were getting bounced around too much! An abundance of light – it was bright and cloudless most of the day – also caused problems with reflections when shooting some shots.

By two o’clock, only the car segment and an insert shot of a letter being opened were done and it was starting to look like it would be a hard push to shoot three scripts by nightfall. 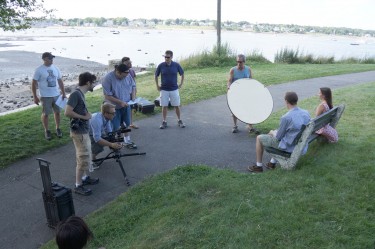 The next sequence moved to the park bench. This involved multiple angles, use of a slider, and took quite some time to shoot. By now the crew and actors had swelled to 15. With all the gear and crew, the path was partly blocked for people walking by. Many were so polite they walked down the bank rather than walk through the stacks of production equipment. More than a few wanted to know what was going on.

One concern was that since they were unpermitted, they didn’t want to attract the attention of the police. “I didn’t bring the full-size boom,” explained Paul, “as it would attract too much attention.” Luckily, all they got were some stares from the guy driving the park’s dump truck. 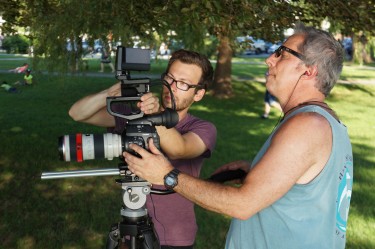 The shoot on the bench was possibly one of the most well documented film efforts, with multiple cameras and cell phones recording the proceedings. Once the bench scene was completed, Rick and a small crew went to a house a few blocks away that Rick had previously scouted as a location. With time running out, Sean started shooting his piece with a Canon 5D, while Rick wrapped his shooting of a fight scene under a tree.

Filmmaking, particularly narrative, is a collaborative art, and getting experience working with others isn’t always easy to come by. This “challenge” was definitely a learning experience, and sometimes you learn unexpected tricks or tips: Paul discovered that printing his script double-sided made it harder to find the sections in the script he was working on. Even with a small hood covering the C300’s LCD viewfinder, it was sometimes very hard to view in the bright sunlight.

Rick was probably the best prepared as he had scouted out the location the day before, but he also had to change his script the most because he didn’t have the cast he needed to shoot the story as originally envisaged.

One thing I noticed was that while everyone’s effort was constrained by the time available, there wasn’t quite the sense of panic I’ve witnessed in other competition shoots. Perhaps that was because this wasn’t a true competition; with no prizes, the only goal was to complete your movie. I’ve visited a 48-hour film project in the middle of shooting, and it was much more frantic. It was also inspiring how well everyone worked together, pitching in and doing different things.

At the time, Paul had thought that the goal would be to put up the edited pieces within two or three weeks after shooting. Clearly the excitement was too much, as Paul posted the first cut of his video the next day, while Rick posted his the day after that. Sean posted his just a week later. 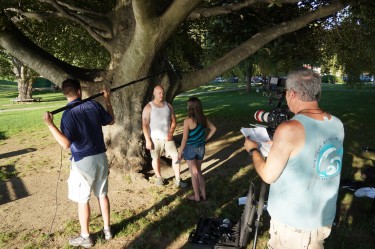 Rick shooting the climax of his movie

Exactly one week after the shooting day, Paul, Rick, Sean, Matt Stapleton and actress Nicole Trauffer got together on the Need Creative podcast to discuss the experience. Paul had been in contact with Steve Weiss of Zacuto, and Steve had taken a look at Rick and Paul’s projects and given them some critiques. Steve told Paul that he doesn’t like these film competitions as he thinks they are too constraining. He did think their videos were well shot. Much of the first half of the discussion in the podcast is a reaction to Steve’s comments. I think it was generally agreed that their films had been constrained by the limited time and resources allotted to the project, and yet, they remained happy that they had actually completed something.

However you feel about the final results, going out and shooting with new people can be a great learning experience, particularly if you’re usually shooting by yourself. Events like this can also be a great way to network and meet people who might be useful for your “real” projects.

At the end of the podcast, Paul, Rick and Sean discuss ideas for doing future, larger projects.