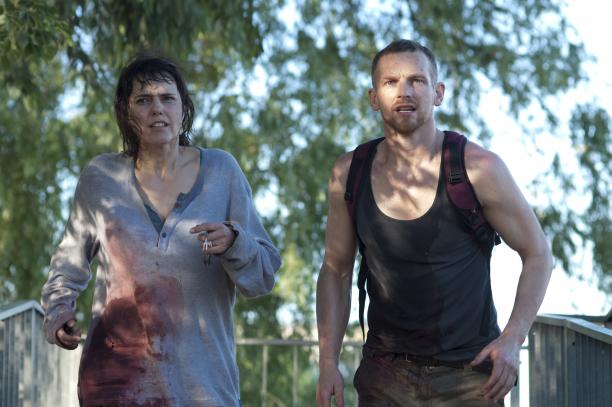 Falling under the umbrella of the Staller Center for the Arts at Stony Brook University, and still run by its original founder Alan Inkles (whose praises I’ll sing a bit later), the Stony Brook Film Festival is a breath of fresh Long Island air in a sea of desperate-to-please fests. Now in its 17th year, the event runs like a well-oiled machine – with screenings starting promptly on time and technical glitches nonexistent – yet feels more like a 10-day family retreat, complete with marina lodgings in nearby Port Jefferson. It’s also one of the warmest, most accommodating festivals I’ve been to. (Literally. After offhandedly mentioning the freezing temps in the theater due to the cranked up AC, a volunteer suddenly appeared bearing a Stony Brook Film Festival sweatshirt for me.)

But several things truly set SBFF apart from other local fests I’ve covered throughout my past year-and-a-half on the circuit. First, there’s no entry fee to apply, which may explain the event’s easygoing vibe. (Financial solvency can do wonders for any artistic endeavor.) Second, there are no shorts programs – the dozen shorts selected were each paired with one of the features instead. And third, there is but a single venue – the Staller Center’s 1,000-seat theater, which boasts a whopping 40-foot screen that screams IMAX more than it does DIY filmmaking.

In fact, SBFF has more the vibe of a carefully curated cinema series – and Staller Center director Inkles actually programs one of those, too, playing everything from the Dardenne brothers’ The Kid with a Bike to Lynn Shelton’s Your Sister’s Sister this fall – sprung from the mind of an old-time cinephile character. Part vaudevillian showman, part savvy wheeler-dealer (and a genuinely gracious host, to boot) Inkles is so contagiously enthusiastic about his selections – and where they go after SBFF – I was shocked to learn he’d never been an industry insider. (I was betting he was either a former Hollywood producer or a Weinstein exec – not the onetime actor and the founder of the International Theatre Festival that he actually is.) That rarest of festival directors, whose passion extends beyond his own fest, Inkles sincerely cares about every single film that makes his 20-feature cut, taking pride in helping them reach an audience beyond the North Shore. (Inkles may not work for the Weinsteins, but he’s not shy about picking up the phone and calling his contacts there and elsewhere if he’s inclined to push one or more of his finds.)

And this singular, idiosyncratic vision – and the top-notch, behind-the-scenes team it attracts – makes for very pure programming. After over a decade and a half Inkles has developed a relationship not just with repeat filmmakers, producers and distributors, both nationally and internationally, but also with his returning – and very vocal – audience. (Which is also jarringly uncensored. During the post-screening Q&A of Megan Peterson and John Douglas Sinclair’s “western crime drama” Heathens and Thieves, Don Swayze, one of the film’s stars and a veteran actor and stuntman – and the sweet-as-pie brother of Patrick – was weirdly queried about whether he’d seen the Broadway musical version of Ghost.)

So while I may not have been a fan of such selections as Julie Delpy’s Le Skylab – a strictly-for-Francophiles flick satirizing ’70s Parisian revolutionaries and backwards Bretons that’s really a series of actors’ skits pieced together, the script becoming more tedious and repetitive as Delpy quickly runs out of ideas – I can respect SBFF’s shrewdness in nabbing the East Coast premiere of a film by the director of 2 Days in New York. (Same goes for the closing night feature, Jennifer Devoldère’s The Day I Saw Your Heart, which like Le Skylab, is a study in quirky characters designed to elicit easy laughs rather than earn them through nuanced writing. Nevertheless, it provided the festival with the New York premiere of a Mélanie Laurent-starring vehicle.)

Similarly, flawed films like the world premiering feature No God No Master, a solid History Channel-friendly narrative from Heavens Fall director Terry Green, had enough redeeming qualities to justify its opening night slot. Following the investigation of a bomb plot against famous politicos and financiers during the Red Summer of 1919, Green’s film offered both high production values and a quality ensemble cast that could keep up with the talent of its star, David Straithairn. My favorite of the handful of German films, Leander Haußmann’s New York premiering Hotel Lux, a black comedy about a cabaret Stalin impersonator who gets mistaken for Hitler’s personal astrologer, could easily hold its own against anything Sony Pictures Classics has on its slate. (Which, unfortunately, was not the case with Robert Thalheim’s U.S. premiering Westwind, a by-the-book, coming-of-age-in-East-Berlin tale about twin sister sculling champs. Perhaps to save costs on music rights it was seemingly set to the same three songs – Depeche Mode’s Never Let Me Down Again, Camouflage’s The Great Commandment and The Cure’s Just Like Heaven – annoyingly played over and over to signal “80s era.”)

Yet the one standout, and my own genuine find of the fest, was also the biggest surprise. The U.S. premiering, Jury Award Best Feature co-winner (tying with Kurt Kuenne’s Shuffle, a Twilight Zone homage not nearly in the same league), Diederik Van Rooijen’s Taped (pictured above), is a tight Dutch thriller. Starring the made-for-Hollywood Barry Atsma – who first caught my eye onstage, in Toneelgroep Amsterdam’s Hedda Gabler – the flick ostensibly is about a couple whose vacation escape to Buenos Aires to repair their broken marriage turns into a fight for their lives after they accidentally videotape a corrupt cop’s shooting of an unarmed man. Like a Dutch version of Haneke, Van Rooijen takes sheer delight in punishing his characters, capturing every detail with glee as their insular drama morphs into grand, nonstop, stylized gore. Taped serves as a smart metaphor, one in which emotional violence is made both visual and visceral. Here’s hoping Columbia Pictures, the studio that recently bought the rights to an American remake, hires a guy like Tarantino to helm.