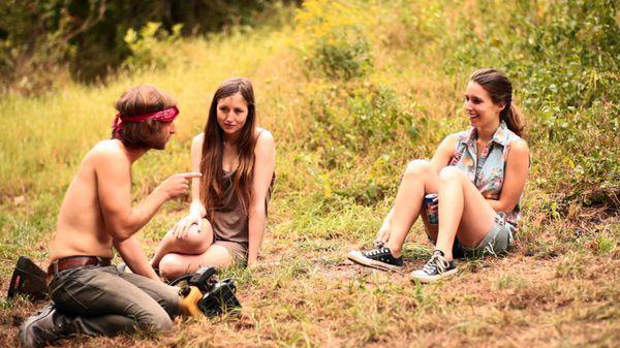 by Brandon Harris
in Director Interviews, Directors, Interviews
on Sep 7, 2012

In Sophia Takal’s Green, a couple of young, New York sophisticates travel upstate in order to research a book on sustainable farming, but when a working-class local woman becomes the object of their affection, jealousy and sexual gamesmanship threaten to ruin their relationship. Mining the insecurities that persist amongst young lovers is not necessarily new ground, but Takal, working with her fiance Lawrence Levine and roommate Kate Lyn Sheil, invests the storytelling with a moody disquiet, an emotional honesty and a jarring sense of foreboding that elevate the film above so many of its predecessors. Widely deploying the color of envy in its rustic milieu, its a marvelously cinematic enterprise for what is essentially a micro-budget chamber drama, eschewing many of the artless clichés that hamper so many productions of its kind.

The film, long a favorite on these pages, has cut a winding path through the international festival circuit, premiering to much acclaim at SXSW in 2011. It was a regular on the A-list, spring and summer American indie fest circuit (Independent Film Festival Boston, Maryland, BAMcinemaFest) before prestigious fall engagements  at AFI Fest and MoMA, where it screened as a nominee in our own Best Film Not Playing at a Theater Near You Gotham Award competition. Takal was named one of Filmmaker‘s “25 New Faces in Independent Film” that same year, and since Green she and her co-stars have been the stars of a Joe Swanberg film all of their own (The Zone, referencing the nickname of their former Greenpoint apartment) and have been featured individually or in tandem within in a series of fest circuit favorites (Takal in V/H/S and Supporting Characters, Sheil in Silver Bullets and Sun Don’t Shine, Levine in Richard’s Wedding and Gayby just to name a few). They comprise one of the most prolific trio of performers working in low budget movies.

Green opens today at Chicago’s Facets Theatre and New York’s reRun Gastropub Theater (which marks its reopening with a week long run of the film, after a two-month hiatus). 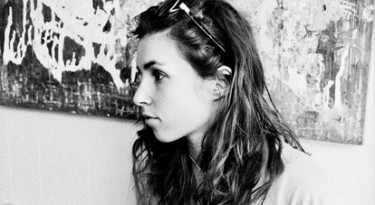 Filmmaker: Was there a particular incidence of jealousy you experienced or became embroiled in that led your interest in exploring the topic in this film?

Takal: Yeah, I got real jealous of my partner, Lawrence Levine, on the set of Gabi on the Roof in July. He was doing a sex scene (that didn’t make it into the movie) and got a boner and I cried, broke up with him via a text message from the bedroom of our apartment while he was in the living room and punched him. That was the worst.

Filmmaker: After that experience, you decided you had to address in a meaningful way artistically?

Takal: Yeah, well, particularly because I talked about it with friends and they had similar feelings (though none of them were dumb enough to act out of that rage the way I did). Starting the dialogue with them made me feel less alone in these feelings and I thought that making a movie might be a good way cf continuing that dialogue.

Filmmaker: Was it more or less dangerous for you to play his object of potential desire in the following project, as opposed to the jealous partner?

Takal: I think it was less dangerous — it was better for me to not channel those emotions.

Filmmaker: Were you fearful, being a first time director, about co-starring in your own first film? If so, what coping mechanisms or collaborative strategies did you develop to overcome that?

Takal: No! I didn’t even think of that. Mainly because I didn’t know if anyone would see the movie ever and it just was practice for me and if I failed, I failed. I was surprised at how unfocused I was a lot of the time when we were shooting — I couldn’t turn my director-brain off when the camera was rolling so it wasn’t actually as fun as I thought it would be to perform since part of what’s fun about acting is losing myself in an imaginary circumstance. Some coping mechanisms/collaborative strategies were: doing at least 10 takes of any shot I was in; asking Lawrence and [d.p.] Nandan [Rao] what they thought about my performance and my accent after every single take; crying.

Filmmaker: What were your overriding visual concerns when you began designing how the picture would look? Did the necessities of filmmaking alter your initial plans at all?

Takal: I knew I wanted the film to be still, slow and steady. I referenced Ozu a lot when talking to Nandan. I wanted the focus of the film to be on performances with lighting that seemed organic. We only used natural light. We used frames that weren’t overly composed or unnecessarily “artsy,” but still beautiful. I also wanted to also take advantage of the beauty of where we were shooting.

Filmmaker: Where did you shoot? How did you settle on that location?

Takal: We shot at my dad’s house because it was free!

Filmmaker: The idea of would-be urban sophisticates moving to the South to write books about sustainable farming is perhaps ripe for satire, but you take what they’re doing at face value and to great effect.

Takal: Thanks. That’s actually where the idea started, the idea of some guy who writes for GQ moving to the country to write a blog about sustainable farming. It tickled me, I thought it was idiotic, and I thought it was funny.

Filmmaker: The production of low-budget films are often stories of compromise. What were yours?

Takal: I conceived of the film with the “compromises” involved, so from the start I knew what I was getting into. I didn’t start with a script that I had to scale down to fit my budget or lose actors because I couldn’t raise enough money. I didn’t care about shooting on film or what camera I shot on or anything like that. So, technically there weren’t really any compromises. That being said, my relationship with Lawrence is often compromised when we’re working together. I probably should have compromised more with him but instead I just argued and tried to force him to do what I said.

Filmmaker: Does that generally work, forcing him to do what you say?

Filmmaker: Having worked and lived with them for so long, do you have a valuable short hand with Lawrence and Kate?

Takal: Y. I can’t really elaborate, but Larry and Kate would totally know what I mean by that.

Filmmaker: What was the most difficult aspect of the movie to make work in post-production?

Takal: Genevieve’s transition into jealousy was hard. I wanted it to seem very abrupt, out of nowhere, much like my own jealousy feels like but something didn’t get across to friends I showed the film to. I tried rearranging scenes but that still didn’t work and I even shot an extra scene in my mom’s backyard that was just a close up of Kate’s face with a fire. Eventually I showed the film to Ry Russo-Young, who made a lot of great rearranging suggestions that really opened things up for me and helped build the jealousy slowly and subtly but allowed for that big moment where it really hits Genevieve to still feel unexpected.

Filmmaker: Has the process of showing the movie, which has garnered tremendous acclaim during a long fest circuit run, changed its meaning for you? Has anyone else’s response to it changed how you think of it?

Takal: Yeah! I didn’t really think about the movie as a product or how other people would respond to it. I gained a lot of confidence from my experience on the festival circuit and started to feel more interested in connecting with people through art. That people who I respect and admire and whose work really speaks to me see value in the film means a lot and even helps me see strengths of the film I might not have appreciated before. It’s interesting to hear people’s negative reactions to the film, too, because often they are honing in on some part of the film I didn’t even realize was going on or adding a whole layer of meaning to the film that wasn’t there for me. Even the bad reviews help me look at the film from a different vantage point.