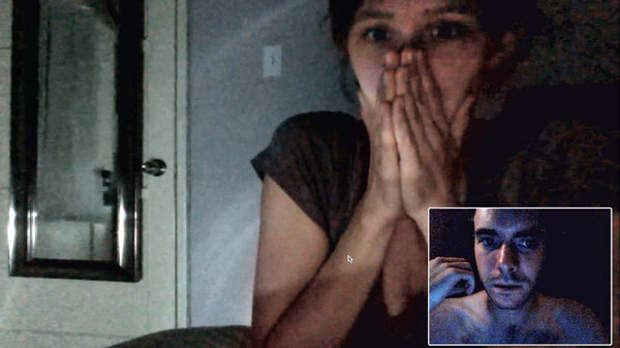 by Farihah Zaman
in Columns, Filmmaking
on Oct 5, 2012

The most important thing to know about V/H/S is that it is more than the sum of its gimmicky-on-paper parts, which include found footage film, genre anthology, and snuffy homage to the recent history of lo-fi horror. Although it is not entirely free of the inherent unevenness of the omnibus film, V/H/S works surprisingly well as a whole because of consistency in the aesthetic, clever writing, and tongue-in-cheek humor across multiple directors’ vignettes.

The setup involves a group of 20-something delinquents whose primary activity is shooting prank videos of a slightly racier nature than the likes of Jackass. When they receive an offer of cash in exchange for breaking into the house of an unknown VHS collector to retrieve a particular tape, it sounds easy enough, but the fact that the first thing they lay eyes on is a corpse in front of black-and-white TV snow is an ominous sign. One by one they play tapes to see if it is the one they’re after, and find a bevy of odd and disturbing material that they are unable to pronounce as fictional or real. Each tape is in fact a short film by one of the contributing directors. Amateur Night (David Bruckner) turns the familiarity of a date-rapey jock romp into a bizarre beastie nightmare, while Second Honeymoon (Ti West) follows a couple on a road trip through the Southwest who are being followed by a sinister stranger. In Tuesday the 17th (Glenn McQuaid) a bunch of teenagers take a trip into the woods where just one year ago another group of friends was murdered by a serial killer, and The Sick Thing That Happened to Emily when she was Younger (Joe Swanberg), presented entirely through video chat, utilizes mumblecore internet paranoia to a create a paranormal mystery. Personal favorite 10/31/98 (Radio Silence) is an effectively creepy, unexpectedly funny ghost story in which a group of friends on their way to a Halloween party instead stumble onto a terrifying exorcism.

While found footage technique seems to be awfully trendy these days, particularly in genre film (Chronicle and the hugely lucrative Paranormal Activity series come to mind from this last year alone), its employment in V/H/S is unique in that the media is tied into the nature of the storytelling in various ways. The film is not using found footage to reflect the current zeitgeist of common digital technology, a concept already starting to get tired with the second season of Gossip Girl, but to take stock of the past, the place that video and in particular the idea of “home video,” has held over the years. This film is a reminder that VHS is a forerunner of all digital technology and ushered in the widespread ownership of the cinematic image. The use of VHS is also a funny twist on the current fetishization of analog since the proliferation of digital; a fixation usually reserved for 16mm film stock, Polaroid cameras and the like. People don’t generally feel nostalgic about a technology that is inferior in both image quality and convenience of use; shooting and projecting film is hugely inconvenient but imparts a distinctive look to the image, the way a song played on an LP sounds inexplicably deeper than one played off a cassette tape, making the tradeoff worthwhile. But these filmmakers have realized how that so-called inferiority lends itself to horror film, with its grainy mystery, discomfiting blips, and seedy intimacy.

The wraparound is as justified as the technology; unlike the cell phone and easily uploadable video technology, which is accessible to anyone with an internet connection on any common handheld device, VHS is a physical technology. The characters must be in the actual presence of the tape in order to watch it (and allow the audience to watch them), so a story dedicated entirely to explaining how these characters are watching these videos one after the other is more than justified. As opposed to, say, Chronicle, in which the found footage aspect is exciting but not always vital from a narrative perspective; the explanation boils down to little more than “the protagonist just likes to film everything.” Besides that the boys of the wraparound are compelling; vaguely anarchic but with no discernible politics, tasteless in a way that becomes grudgingly endearing, wannabe toughs who are primed to end up in over their heads. It no small feat to convey all this information in the brief scenes that the boys appear onscreen. While the plotting of the wraparound ultimately peters out, knowing what a thankless job it is to create the meager skeleton from which the real meat hangs makes it harder to fully fault Adam Wingard for that issue. He was able to develop something suspenseful and character driven that both reflected the tone of the film as a whole and provided an unexpectedly modern counterpoint to it.

Since everyone is bound to have their favorite piece, it is helpful to remember that the segments are in fact designed to work together rather than in competition with one another, each segment pitted against the others according to various criteria like suspense, cinematography, and the scare factor. Every time I spoke to someone new about this film, they would highlight a different segment as the one they felt worked best, which just goes to show the varying quality I experienced may be tied more to individual taste than objective assessment. Something about the stricter structure of the film, where each piece draws on a particular genre or classic trope (succubus, lesbian revenge, cabin in the woods, ghost story), allows every viewer latch to on to the piece that best speaks to their fears. Memorably, disgustingly fun in spite of its shortcomings, V/H/S is both an effective horror movie and the litmus test of horror movies.