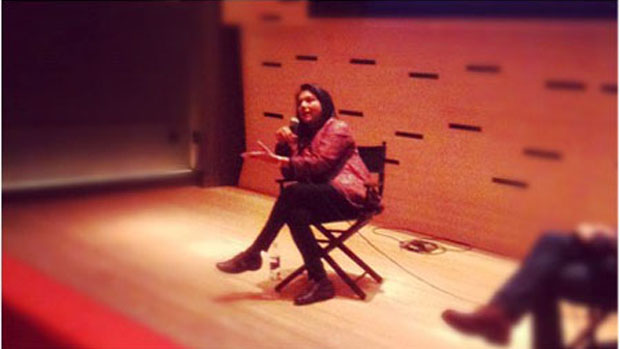 It’s been nearly two weeks since my participation in IFP’s Emerging Visions Program and now that the dust has settled, I can see clearly how valuable this experience was, not only in a practical sense, i.e., the nuts and bolts of filmmaking, but also in more intangible ways.

I was lucky to have the opportunity to participate in the Emerging Narratives and the Emerging Visions Program, back to back, with my feature film script The Whispering Giant. Both IFP programs offer filmmakers a chance to pitch their projects in a “safe” environment, where they can be critiqued by an industry panel and an audience of their peers. The difference is that while the Emerging Narratives Program is designed to connect filmmakers with potential production resources, Emerging Visions is more of a mentorship program, where fellows are advised not only on their pitch, but also on self-presentation and the development of their projects and careers.

The Emerging Visions Program was held in tandem with the New York Film Festival, so there was much hustle and bustle as I arrived at the Elinor Bunin Munroe Film Center at Lincoln Center. There were 12 fellows in all, and we were greeted with a lovely breakfast and given a chance to get to know each other a bit before we stepped into the amphitheater for a discussion with Mira Nair. What an amazing storyteller she is! Her recounting of her life’s journey in filmmaking was incredibly vivid, and filled with humor even as she described the low points. I think this honesty and richness of detail translates to her films.

My big takeaway from this discussion, in a practical sense, was when she talked about her work with nonprofessional actors. She described a sort of alchemy that can develop between actors and non-actors when making a film. Since my plan is to shoot The Whispering Giant in my home state of West Virginia, working with just such a cast of professional and non-actors, her words really hit home: “Cast to type and don’t over rehearse.” This seemed simple enough. But I realized that for this practical advice to work, you must be able to trust yourself to know when something is working and when it isn’t. You’ve got to be able to trust your gut.

Which brings me to our next discussion, which was with Jonathan Demme. He shared his journey with us from his beginnings with Roger Corman directing exploitation films to Silence of the Lambs. It took many years for him to master his craft, and like any life and career his have been full of ups and downs. I was again taken with the humor with which he related his story. Like Mira Nair, his words painted a very vivid portrait of his life as a filmmaker. My ears perked up as he announced that he was about to tell us the most important thing he learned through the years: “Listen to your little voice.” Trust your gut. He then told a wrenching story of a film he was set to direct once upon a time. He didn’t listen to his little voice. He got burned.

As we wrapped up these lively discussions, I thought about how incredibly resilient these two veteran directors have been over the years and how their enthusiasm for the craft remains unflagging. Much to admire and inspire there.

Finally, we had the opportunity to sit for a good ninety minutes with a mentor selected by the IFP. Mine was Thomas McCarthy. Mr. McCarthy struck me as intensely focused and intelligent, as well as extremely busy…. which bodes well for us as indie filmmakers. He offered insight into his casting and writing process, while sharing an anecdote or two about the travails of getting his films into production. These stories got us all chuckling, and I was reminded once again of how important it is to keep a sense of humor in this business.

All in all, Emerging Visions was an intense day, wonderfully spent. We heard from veteran filmmakers about what it takes to establish a film career and keep it going. While hard work and dedication to the craft are essential as you learn the nuts and bolts of production, there are certain intangible qualities that will sustain you in your life and career: passion, resilience, the ability to trust your instincts and to laugh at yourself when things go wrong.