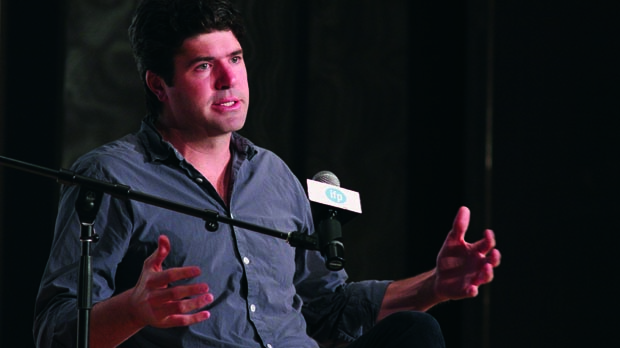 by Mary Anderson Casavant
in Issues, Reports
on Nov 1, 2012

Memorable movie moments may be made out of triumph — the winning of the big game, the getting of the girl — but a career in film rarely reaches its triumphant third act in 90 minutes. Even the most successful filmmakers spend years on their journey, and it is for them — those waiting and hustling for their breaks — that Independent Film Week exists.

Founded in 1979 by IFP, the publisher of Filmmaker, Independent Film Week has mushroomed over the past 33 years into a one-of-a-kind event that connects emerging and established artists with the producers, financiers and executives that can help shape a career. Please note that I used the word “shape” rather than “make.” As was emphasized in the numerous panels and discussions, a career is not something that is “made,” it is something that is nurtured and cultivated. Indeed, in addition to counseling filmmakers on how to angle toward possible big breaks, Independent Film Week in its panels and seminars also emphasizes DIY and sustainability strategies, recognizing that it’s as much about what you can do for yourself as what others can do for you.

Over and over again, people who have spent years in the business of making movies emphasized the importance of finding your own path. In a discussion with James Schamus, producer, screenwriter and CEO of Focus Features, and producer Christine Vachon, hosted by IFP Executive Director Joana Vicente, Schamus remembered how when he was first starting out, “I would see my colleagues chasing distributors down the hall, but that’s not who you should find. Find the assistants. Find your peers. They’re the ones who are going to lift you up.”

Vachon agreed with Schamus, noting that she regularly asked her interns for tips on filmmakers doing new things. It’s an attitude she said is more necessary now than it has been in the past: “Independent films more than ever before are about being truly original.” She also gave perhaps the most profound piece of practical advice I’ve ever heard for a young producer: “Try and make sure that the director you’re backing isn’t a psychopath.” It was a thought echoed by producer Mynette Louie in a separate panel when she advised first-time producers to “pick your projects carefully, because they stay with you forever… Nobody else is going to take care of it at the end of the day.”

In what was, for me, the highlight of the week, J. C. Chandor, the Academy Award-nominated writer and director of Margin Call, spoke honestly about the difficult, 15-year process of getting his first film off the ground. After years of putting his family into financial difficulty so he could write scripts he didn’t think were good enough, Chandor found himself unexpectedly inspired by the collapse of Lehman Brothers and the subsequent economic crisis.

Chandor called writing Margin Call “one of the greatest writing experiences of my life,” noting that while he latched onto the story because it could be made in one location and cheaply, he found its limitations inspiring. If there was any lesson to be taken from his experience, it was, “instead of running away from [your film’s] weaknesses, you sit with them in the room and square off with them directly, and say, ‘What does this inherent weakness have to offer my film? How can I literally turn this into a strength?’”

Amid so much discussion of how to make a film, it was a delight to see people who had simply done a lot with little means and who were in the process of figuring out how to make more at the various screenings. At the IFC Center and Filmmaker-hosted screening of selections of short works from the “25 New Faces of Independent Film,” Desiree Akhavan (co-creator of the hilarious Web series, The Slope) said it wasn’t so much what happened to her since being on the list, but how it changed her outlook. “Being one of the ‘25 Faces of Independent Film’ seemed impossible to me, and now that I’ve been it, it’s changed my attitude and made me think that things I once thought were impossible are actually attainable.”

For the veteran producers, distributors and makers of content at  the invitation-only meeting/discussion ReInvent, the dialogue turned to today’s new distribution platforms and how to exploit them for new sources of revenue. Speaker Bob Berney pointed out that just that weekend, Paul Thomas Anderson’s The Master had been released as a specialty-film event on 70mm, while Arbitrage had managed to make pretty good box office at the same time while also being readily available on VOD. Citing these two very different examples, Berney emphasized the importance of finding the right platform for the individual film, noting that genre plays a huge role in what does well in VOD while critical support and a theatrical release is important for foreign films. With so many options available, it’s no wonder that Cinetic’s John Sloss, called this “the most dynamic period I’ve ever been a part of.”

At Independent Film Week’s close, the question remained for filmmakers, “How, going forward, do I capture that dynamism? How do I become a part of making the impossible possible?” After a week’s worth of panels, screenings and discussions, the thing that most stuck in my mind was a quote from Vachon discussing how her company, Killer Films, has stopped thinking of itself as a movie production house but rather as media producers, across all platforms. “We’re cockroaches,” she said. “We have always managed to adapt.”