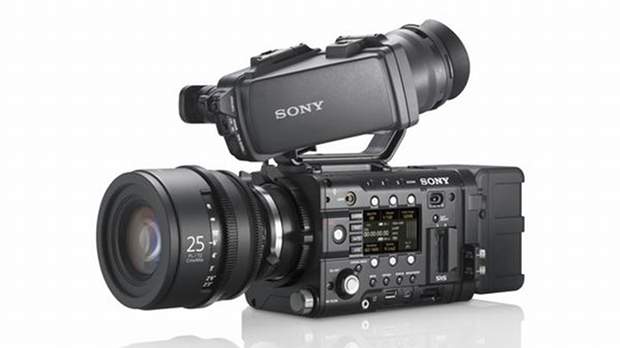 by Michael Murie
in Cinematography, Filmmaking
on Oct 31, 2012

On October 30th, Sony announced two new cameras; the PMW-F5 and PMW-F55. Both cameras bring 4K capture, a common modular design and some new technologies to Sony’s CineAlta line of cameras. Unfortunately, what Sony didn’t release was pricing or sample video. The pricing may come in a couple of weeks, and video will reportedly be released sometime near the end of November. Actual cameras will ship in January 2013.

This leaves us to look at the pictures of the shiny new boxes and study the specs and go, “That looks nice,” or as Philip Bloom put it, “I want an F55. I want it now. Give it to me now, or I will scream and scream until I am sick!!!!” Clearly he wants the global shutter and 4K internal recording; two features that the F55 offers over the F5.

But seriously, if the F5 is around $15,000 then that will be very interesting. If it’s $25,000, it will be a little less interesting. The F55 is thought to be closer to $40,000, but given that these cameras are physically identical, you might buy an F5 and some accessories, then rent an F55 body for those times when you need the higher frames rates or the global shutter of the F55.

Sony Is Listening
As interesting as the new technology – and promised 14 stops of dynamic range – is, these two cameras also show that Sony has been listening to, and are making a serious effort to woo customers. While the image quality of the PMW-F3 was widely lauded, it wasn’t a shoulderable camera – without a third party rig – and while the LCD Panel was good quality, it wasn’t in the right position when you had the camera on your shoulder. Sony has reworked the design, added a shoulder rig option, and will offer three EVF options; an improved LCD EVF, an OLED EVF and a 7″ LCD.

They’ve also been working on the menus and buttons, and the side controls on the camera now look very similar to the ARRI Alexa. Could a Japanese camera company finally have developed an easy to understand menu system?

While the two cameras are almost identical from the outside, internally they are very different. The F55 shares the optical block from the F65, while the F5 shares the optical block from the NEX-FS700. The F55 will be able to record 4K compressed internally, while the F5 will only record 2K internally, but both offer 4:2:2 recording at high bit rates. The maximum frame rate is different too; 240fps for the F55 and 120fps for the F5. Both will output 2k and 4k 16 bit raw, and both have built in .9ND and 1.8ND.

Last, but not least, these two cameras unify the camera line given that they share body design, but their optical blocks come from the cameras below and above them.

Sony also announced a new set of Prime lenses. The PMW-F3 has been available with a set of three Prime lenses that were well priced, but were only available with the camera. And though they were PL lenses, Sony wouldn’t warrant that they would work with other PL mount cameras.

Part of the reason they were so inexpensive was that the camera was doing a lot of correction for the lenses, and mechanically they were a bit…plasticky. While no one has reviewed the new lenses yet, initial reports suggest that the new ones are more solid mechanically.

More on the NEX-FS700 4K Recording
For those on a budget, perhaps the more important announcement today concerned the 4K recording option for the NEX-FS700, which is starting to come into focus.

F65 Update
At the other end of the spectrum, Sony announced that a future firmware update for the F65 will enable recording at 8K x 4K, 6K x 3K and 8K x 2K (the camera currently supports 4K x 2K.)