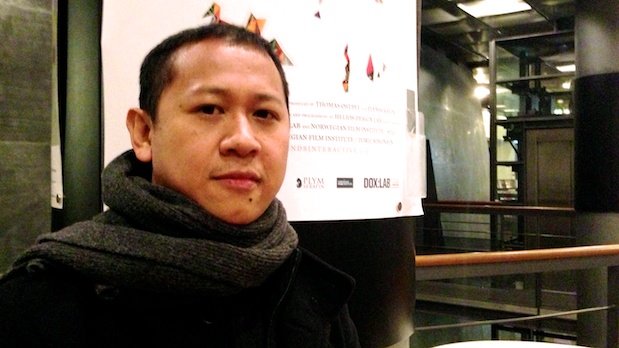 by Scott Macaulay
in Festivals & Events, Filmmaking, Transmedia
on Nov 12, 2012

While at CPH:DOX I attended a seminar titled “An Interactive Audience” spotlighting new works in transmedia. One of the projects discussed was 17,000 Islands, a work commissioned by the festival’s own DOX:LAB, directed by Indonesia’s Edwin (Blind Pig Who Wants to Fly) and Norwegian transmedia doc director Thomas Ostbye, and produced by interactive producer Paramita Nath. The project, in which Edwin (pictured) and Ostbye make a film that is then “destroyed” by its viewers over the internet, sounded fascinating, so afterwards I pulled Edwin aside to learn more.

First, here’s the description of the project from the CPH:DOX catalog:

17000 ISLANDS is an interactive transmedia documentary. In Indonesia, Jakarta, there is a Disneyland style museum park named Taman Mini. It attempts to present the diverse cultures of Indonesia in a condensed and manicured form - an idealized image of the 17.000 Islands of Indonesia. Fascinated by this idealized and artificial representation, Indonesian director Edwin and Norwegian director Thomas Østbye embarked on a task to lose control of their own film, and capture some real life within this controlled and artificial setting. The website 17000IslandsInteractive.com opens in 2013. Here the two directors invites you to rip apart their original movie, take their place as directors and make your own film with their material. At CPH:DOX 2012, Edwin, Thomas and Paramita Nath will present the project and there will be a screening of the first user made ISLAND shortfilms, made by invited CPH:LAB directors. Produced by Thomas Østbye Plymserafin – Supported by CPH:DOX & Norwegian Film Institute.

“We didn’t intend to make a transmedia or interactive project,” explains Edwin about the collaboration. At DOX:LAB, directors are partnered and given funding to make a film over the course of the next year, and it just happened that after their collaboration, the resulting film wound up destined for the internet. “Our original idea was to destroy our control [over the filmmaking], and we started making the film in a normal documentary style. We had this idea of going to a place, playing with the concept of deconstructing and restructuring the image. We experimented with how we shot the film, and we became totally out of control, making random decisions.”

Edwin tells me some of their strategies, like following a stray dog with their camera and shooting the random places he led them to. But when it came to post-production, the filmmakers realized that “editing is all about controlling — it’s difficult to lose control.” They realized that the very nature of post-production, where images are selected and ordered, was antithetical to the concept of destroying the filmmakers’ control of the image. “Then we came up with this idea,” says Edwin. “I said, ‘I think we should distribute the film in a different way, less conventional way. We will put everything in the interet and hope our film will be lost and destroyed by the audience.”

How will that happen? When the film is finished, Edwin and Ostbye will post it online. Viewers will be able to use the footage to make their own works, at which point that footage will vanish from the original work. As footage is removed, the film will, effectively, disintegrate. “Only when we launch the film on the internet for the first time will people be able to see it,” says Edwin. “The question is, will it be destroyed soon, or over time?”

In order to facilitate their creative destruction, Edwin and Ostbye are giving viewers new tools to pull apart and reuse the footage. “We have this system we call sculptural editing,” Edwin says. “It’s editing by geometry. The film [clips] are represented by small geometric shapes, and people can drag them around like a puzzle. And then, if they want more control, they can edit with more normal editing software, trimming, adding sound, text and even effects.”

Edwin says he and Ostbye hope they’ll “get something new from the people who do the editing.” He says some people will most likely “consciously construct” linear narratives from the scraps, but he hopes other will “just play.” So far they’ve tested their system with a Finnish filmmaker friend, and he came up with “ideas that were really interesting and surprising, ones we didn’t come up with during six months of editing.”

The project may sound completely unconventional, but Edwin concludes by telling me it’s really not so radical. In fact, it replicates the way he watches any movie. “For me, I enjoy nonlinearity in terms of not only the film form but also when you watch the film. The audience has the right to construct the structure of the film. If I watch a film in a cinema, I can enjoy the first scene, enjoy the middle and forget about the rest. I like to play like that with my own mind.”

17,000 Islands is due to launch online sometime next year.