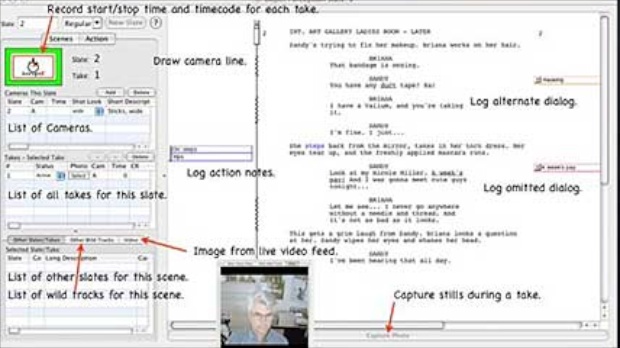 When I started out script supervising almost 20 years ago, the tools of the trade were a stopwatch, a pen or pencil, paper, a Polaroid camera and that all important bible, the script. Each script supervisor had his or her own idiosyncratic system for “maintaining continuity” of a film or a TV show, but walk on any set and the basic tools were all the same. Maybe you typed up your notes at the end of the night on, yes, a typewriter; maybe you didn’t.

Well the tools have now gone digital, thanks in large part to script supervisor Anthony Pettine and his business partner, Bob McFarlane, creators of ScriptE, software for script supervisors. (And to be honest, I was a skeptic.)

Pettine got his start as a script supervisor doing the ultralow-budget, digital films that came out of the now defunct digital production company InDigEnt. A Hallmark Hall of Fame production of Hamlet directed by Campbell Scott led to Pettine’s entry into IATSE Local 161, the script supervisor’s union, and from there he racked up a string of TV and film credits that include such indie faves as Tadpole, Roger Dodger, The Woodsman and The Wrestler.

Pettine, a film buff from a young age, found his niche in script supervising but also found the redundancy in the paperwork portion of the job (description forms, editor’s logs, production reports) frustrating. He says, “It takes time away from what I feel is a really important part of script supervision: working with the director and a.d.’s and making sure you get all the shots you need to cut the movie together.”

Being a bit of a computer geek, Pettine cobbled together some makeshift systems over the years but in June 2007, he approached software designer and friend Bob McFarlane with the idea to create a software system specifically for script supervisors. The two formed a company and the creation and refinement of ScriptE began in earnest.

“I flowcharted the whole thing and then Bob took a crack at it and within a month we had a version to test,” says Pettine, who acted as the software’s guinea pig.

By August 2007, they had their first legitimate customer and since then news of ScriptE has spread throughout the script-supervising community, both nationally and internationally, primarily through word of mouth and training seminars that Pettine teaches.

What Does It Do?
So if you’re primarily a pen-and-paper script supervisor (as I was), what can ScriptE do for you?

Let’s start with preproduction. The script can be imported into ScriptE directly from Final Draft. During the script-importing process, ScriptE culls much of the information used by script supervisors to create their preproduction breakdowns. Page and scene counts, preproduction estimated timing, character lists, wardrobe and prop lists and location breakdowns can be generated, stored in specific files, and the program can be set up to e-mail any or all of these breakdowns to the appropriate production personnel.

When creating a “continuity of days breakdown” (also know as a story-day breakdown), ScriptE will look to other scenes to see if that same script day has already been used and, if so, the date and weekday will be filled in automatically.

Back and forward-matching notes can be compiled by scene, character and story day in a series of Smart lists and saved in their own separate files.

Many script supervisors use the time it takes to prepare the various breakdowns as an opportunity to read, reread, immerse and thoroughly familiarize themselves with the script. With ScriptE managing so much of the clerical portion of prep, Pettine says supervisors now have more time to focus on the script itself: “Now I can read the script over five times and not worry about counting one-eighths of pages. You have more time to actually do your prep work properly, which is just read the script, and not waste time doing the [paperwork].”

We’re Rolling!
Automating the prep portion of the job is an enticing timesaver but once you’re on the set and shooting has begun, what exactly does ScriptE do and how does it make your job easier?

Equipped with a built-in stopwatch and armed with an image-capture device, the software reduces the need for a handheld stopwatch or camera or any sort (although Pettine advocates having a handheld stopwatch for special timing circumstances, such as stop and start performances. “Besides,” he jokes, “if we don’t wear stopwatches, no one will know who we are”). ScriptE also can record time code. It can be formatted to automatically send first shots, lunch break, camera wrap and progress reports via e-mail to the appropriate people.

With the aid of drop-down menus, the click of a button or a few strokes on the keyboard, ScriptE will manage all the basic script supervisor’s clerical tasks including scene and take numbers, camera and lens information, camera and sound rolls, shot descriptions, and wild tracks. With ScriptE, Pettine has automated “lining the script” (which indicates what dialogue and action has happened on- or off-camera) and has even included a feature that indicates when a portion of the shot has crossed the axis (essential information when going in for coverage).

Instead of having to copy pertinent information such as slate numbers, camera rolls and preferred takes from the description form or “facing page” onto the editor’s log, ScriptE can transfer that information from one form to the other.

Action notes for matching can be recorded directly onto the script with one or a series of keyboard clicks to highlight where the note should be made within the action or dialogue on the page. If the notes remain consistent from take to take, the software can copy them from take to take. Pettine has even included a color legend that delineates the action notes made for one take from the action notes made from a different take (if, for example, the actor sat down on a different line in take two than in take one). Matching notes are stored in a database and can be retrieved by scene number and script or shoot day. The program’s “scene window” can be used to track changes in continuity that happen during the shoot as well.

Most script supervisors devise a shorthand that they use while recording action notes on the script during a shot so that they don’t have to take their eyes off the actors or the monitor for more than a second or two at a time. They then expand upon that shorthand once the take has been completed. But unless one becomes extremely proficient with the software or is an accurate touch typist, ScriptE does not seem to eliminate the need for this process.

One of the most attractive features of ScriptE is the image-capture attachment that allows a portion of the script supervisor’s computer screen to act as a small monitor during the shot and lets a script supervisor fire off a series of stills during the actual take that he or she can use for matching continuity. Unsure whether your matching note was correct that the actor picked up the cup with his left hand in take three? Just go back to your photo file, where photos are logged by scene and take.

Additionally ScriptE can make script revisions quick and simple and can also work with multiple cameras.

Pettine finds ScriptE makes it easier to work with the director. “Oftentimes I can get right on the set because my stand is so small,” he says. “I’ll stand with the director and he’ll use my computer as a monitor.” He also finds talking to the d.p. about coverage and eyeline has become more efficient because he can reference the photos captured directly from a specific take.

Getting Started
So what do you need and how much will it cost? Besides the ScriptE software which costs $695 and is available at ScriptESystems.com, one needs a Mac that runs OS 10.4.0 or higher (a version of ScriptE for Windows is currently in the works). Pettine recommends a Mac Book Pro with no less than two gigs of RAM (preferably four).

Additionally, one needs an image-capture device, which can also be purchased at the ScriptE Web site for $90. A cart or a table can be used on set but through trial and error, Pettine now uses the insTand, which sells for $284.95, also on the Web site (there are less expensive ones to be found on the site as well). For a monthly or yearly fee, ScriptESystems.com offers an offline backup system for files as well as tech support.

So the initial outlay for software, computer and basic accessories is in the ballpark of $2,500. But as Pettine points out, “It’s a kit rental. I’m getting between $25 and $100 a day kit rental, depending on the job, so it really does pay for itself pretty quickly.”

Old Dog, New Tricks
According to Pettine, the new generation of script supervisors, raised on computers, takes to ScriptE like a fish to water. It is the more-experienced, “paper-and-pencil generation” who often have a harder time making the transition. While Pettine uses ScriptE for everything, his advice to more-experienced script supervisors with a work system that they are comfortable with is: “Would I recommend you go cold your first job? No, I probably wouldn’t. I’d say do your breakdowns on it and then work on paper and then maybe clean up your notes at the end of the night if you’ve got the time till you get really good at the interface. You can do it any way you want to do it. I designed it to have all these features but I also designed it — because I know how everybody has their own way of working — so you don’t have to use them all. You don’t have to use time code or image capture. It’s there if you want it.”

That was music to my old cynical ears.

For anyone considering ScriptE, the Web site offers a slide show, a tutorial and a downloadable sample of the software.