A (Screening) Room of One’s Own: U.S. in Progress, Part Two 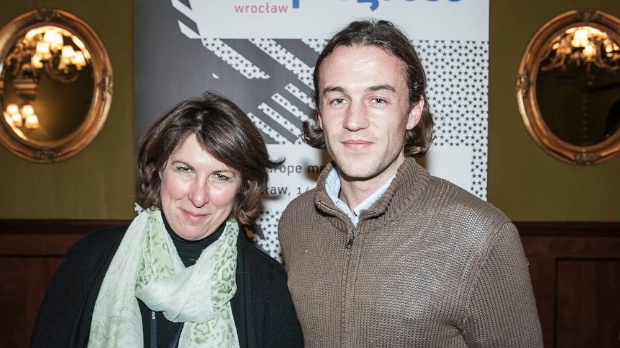 by Gregory Collins
in Filmmaking, Financing
on Nov 20, 2012

The central metaphor of Virginia Woolf’s A Room of One’s Own, as I remember it, is the university; she talks about the vast number of people who participate in its creation – from those who fund & design it to those who actually build it – the result of which is a single (male) student being able to sit and write. Woolf’s point is to illuminate the gendered nature of the systems and structures on which scholarship is built, but the scale of resources that go into the screening of any one film – especially one overseas, in the context of a well-organized festival, with representatives from prominent European festivals and distribution companies in attendance – is a thing of wonder.

As concisely as I can summarize: there are six independent American films in the U.S. in Progress program, which itself is a sidebar of the American Film Festival in Wroclaw. U.S. in Progress is the brainchild of Adeline Monzier, with support from the board of the American Film Festival as well as countless individuals, most prominently from my vantage, Jan Naszewski and Ula Sniegowska. Adeline, who is based in New York and with whom I shared a flight (and a not un-terrifying aborted landing) from Munich, is the manager of Paris-based Europa Distribution, a not-for-profit network of over a hundred European distributors.

Impressive in the abstract, more impressive in reality. I got to the hotel midday on Wednesday. We then met up with all the participants (filmmakers, distributors, sales agents, buyers: about 25 people) for a brief introduction and orientation. As you can see in the brochure, this included some very consequential individuals and entities. The orientation session more of less left everyone on a first-name basis while also giving us Americans a working knowledge of European distribution. For an American filmmaker interested in the European market, it was an astonishing advance in de-mystifying the process.

Then we got underway in ernest. We watched four films on Thursday, ours being the first, and two films on Friday morning. As all six films are in some stage of post production, and as the screenings were not public, the audience consisted entirely of filmmakers and industry: an intimidating energy, to say the least. It’s a big thing to show your work. And it is a difficult thing to not squirm in your seat as you do so. If I could choose one word to sum up how I felt immediately following the screening of my film, it would be naked. Sometimes humiliatingly so, sometimes beautifully so. But my film – as all the films – played well. I am so tempted to say more about each film, but etiquette requires silence until the films are public. Suffice it to say that we were honored to be in the company of such remarkable work and such promising talent. Friday afternoon we underwent three punishing hours of speed dating; ten minutes with each of the attending industry reps. As with dating, distribution is much less about adequacy as it is about fit. But sometimes those things are not easy to tell apart.

Then – pockets stuffed with business cards – we convened for the awards dinner. I don’t know if it speaks to the quality of the films or to the nurturing nature of the jury and organizers, but the awards – a buffet of post production and distribution services – were spread across five of the films. Not to say the spoils were distributed equally – no, deservedly, the big winner was Daniel Patrick Carbone’s Hide Your Smiling Faces – but everyone left with something. What about me, you ask? We won the opportunity to work with Maciej Zielinski, one of Poland’s leading composers.

In an attempt to bring my metaphor full circle, on Thursday morning a handful of my peers and a couple dozen industry professionals got together in Wroclaw, Poland, to watch my film. Attempting to quantify everything that made that possible – from the actual production of the film to the ridiculous thing that is air travel and from those who organize and fund the US in Progress initiative to the festival volunteer that drove me to and from the airport – is simply futile, almost as futile as attempting to quantify the depth of gratitude it conjures inside me.