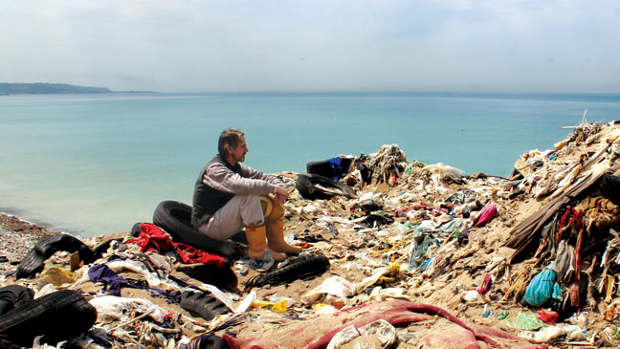 If you were to view the documentary Trashed without audio, the visuals alone would leave a strong impression: Our globe, as captured by the camera’s sweeping gaze, is loaded with staggering amounts of waste. Household rubbish, rotting animals, matted paper and plastic form mountains many yards high, towering ominously over oceans and towns. Steam drifts from the mounds, like great animals giving off heat. According to Trashed, we throw away 200 billion plastic bottles and 58 billion disposable cups every year — figures we’ve likely heard before, but easily forget for lack of visual perspective. Candida Brady’s film provides just that. As Trashed makes clear, the global waste problem has tangible, and frightening, girth.

The film follows Jeremy Irons — wisely clad in rubber boots — as he travels around the world to investigate the global waste problem. He interviews experts, visits landfills, takes soil samples (not without blurting an expletive), and meets those making a change for the better. Irons, not surprisingly, is an eloquent leading man (he charms a number of ladies along the way, including a body scanner at a prison) with unfeigned investment in the subject matter. His gaze of profound disappointment is one you won’t want turned to you. Trashed suggests a grave paradox: like the overarching issue of climate change, the waste problem is so monumental, it might as well be invisible. Throwing one more bottle into a pile of billions doesn’t seem like such a big deal; and anyway, wouldn’t substantial efforts to reduce waste require a complete — as in, unfeasible — overhauling of the way we live now? But Trashed offers a glimmer of hope. If the waste problem is the product of an accretion of our everyday negligence, then perhaps radical change can be made through efforts in the opposite direction, however small they may be at the level of the individual.

Filmmaker spoke with Brady about her research into the waste problem and how the experience has changed her own habits. Trashed opens today. 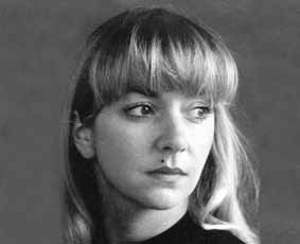 Filmmaker: Jeremy Irons is quite a genial presence in the film, and he often offers an outlet for the viewer’s sympathy (I’m thinking specifically of the scene in which he visits the children’s hospital in Vietnam). Can you discuss your decision to have him narrate and serve as a major presence in the film, as opposed to having a generic voiceover?

Brady: I was aware that Jeremy enjoyed what he describes as “dumpster diving,” and he genuinely doesn’t like waste. He always tries to repair things rather than replace them with new and takes delight in doing so. We had been discussing a couple of ideas, but this felt right. He was instrumental in getting his friend, the composer Vangelis, involved, helped me raise some funding and to raise awareness. I felt it was really important to have someone who not only asked the questions for us, but could also be a skeptical environmentalist, too.

Filmmaker: As your film demonstrates all too clearly, the topic of garbage disposal is difficult to examine properly without an international framework and without addressing the gigantic issue of climate change. Did you have difficulty keeping your film focused, and if so, what kinds of decisions did you make to ensure this?

Brady: The thing about our garbage is that most of us never have to think about it again once we’ve thrown it in the trash. It took me about a year to just absorb all the varying information before I could even begin to think about how best to approach the topic, during which time I became depressed, angry and hopeful, and then a little depressed again in varying degrees. The hazard of doing this much research is that you then become too close to the subject; you become a mini expert, and that’s no good either. Friends are always a very good test as to whether something is understandable or not. If their eyes start rolling when you start talking about nanoparticles, to what was a full room of people five minutes ago you know you need to go back a step. What did become very clear to me, is that it is such a complicated subject, waste almost needs it’s own worldwide regulatory body because it is too much for most people, and they will have knowledge of one area but not another.

Filmmaker: Most of the voices in Trashed seem to be proponents of more responsible handling of garbage. Did you get to interact considerably with individuals on the other side of the issue? What were those conversations like?

Brady: We tried very hard to get interviews with the other side. Shall we say we were met with a “little” reluctance. One company’s PR was unable to deal with our request, as she was on holiday the entire time we were filming. Others never got back to us, however hard we chased. In the end, we let the press releases and published papers do the talking. At the start of my research, I wanted there to be a bad guy, someone we could all pin this on, but what became very clear is that because it is so complicated and every place has the same problem in a different way, what we needed was to all feel a little responsible. It’s not one person or company. The way we live in the Western world has gotten out of control, and I wanted the film to start the conversation on waste.

Filmmaker: During your time filming Trashed, was there a particular experience or fact/statistic that shocked you most?

Brady: Talking to Professor Ana Soto, who discovered BPA [Bisphenol A] in plastic and what it does in the body. She explained that toxic chemicals are afforded the same rights as human beings: innocent until proven guilty. Up until that point, I was under the impression that toxic chemicals were tested before they were included in food wrappings, etc.

Paul Jepson’s work at ZSL [Zoological Society of London] was also truly shocking. He’s been looking at the effect of toxic chemicals on cetaceans in the world’s seas and oceans for 20 years, and he explained that the effects they are having across the board on these animals are hideous—the worst being that killer whales, at the top of the food chain, are no longer able to reproduce, as they carry the biggest toxic burden. If you look, there was a study out last week about the sperm count in French men dropping significantly. And the one which spurred me on, when I hoped I had imagined it all, was a paper published in America that looked at newborn babies randomly selected from hospitals. All of them had toxic chemicals in their blood—like flame retardants, for instance—and all of them had chlorinated dioxins.

Filmmaker: Has the making of this film changed your personal habits regarding waste?

Brady: Yes, without a doubt. I always had a problem with throwing things away. I still ride the same bike I’ve had since I was 16, and I’ve always loved secondhand clothes. eBay is my biggest vice. The best thing for me is the number of people now who tell me the film has changed their habits. That is the best reward in the world.