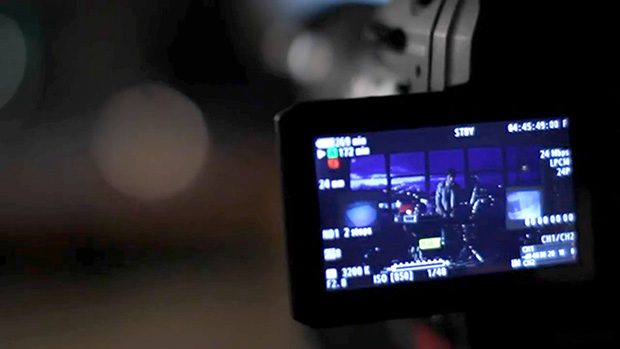 Filmmaker: For this project you were recording to AVCHD?

Moreau: Yes. We used AVCHD in this situation because we wanted it to be as natural as possible, which is possible with this small footprint.

We did an AT&T campaign for the Olympics and [for that we used] external recorders for maximum quality, but you’re dealing with Ryan Lochte and a big production and you can do it five times. In Pulse we wanted it to be more natural.

It was edited on a laptop using native codecs and Magic Bullet plug-ins. It’s very, very low-tech in several ways because that’s how the majority of people are going to use the C100, and we wanted to really show just how powerful it is without adding a lot of extra things.

Filmmaker: What did you use to edit the video?

Moreau: It’s edited in Premiere CS6 and it was edited natively. This being a prototype camera, all the software wasn’t fully developed at the time, so it was as simple as dragging the contents off the card, right into Premiere, and starting to edit.

Once the piece was completed, we did grade with Magic Bullet Colorista. Some of the grading is a little more intense, and some of it is a little bit less. The interviews are just basic touch-ups on your blacks and saturation. We definitely did a fair bit more for some of the futuristic representations. There we did some secondaries and pulled out certain hues and played with that kind of thing.

Filmmaker: Did you use C-Log?

Moreau: We didn’t use C-Log. Not that I don’t think C-Log isn’t a great option, but as with the external recorder we felt using a flat profile was more in line with the average user and everyday use. We used the extended dynamic range profile that the camera ships with, and we find that to be a great profile to really maximize your dynamic range while still having an image that looks closer to what you’re going for. It allows you to feel more connected to your camera and image, and make decisions in the moment based on that. 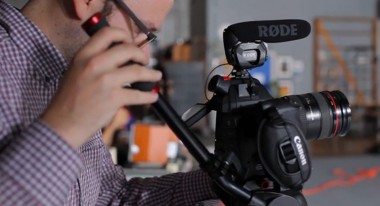 Shooting with the Rode VideoMic Pro. [All images courtesy: StilMotion]

Filmmaker: What were you using for audio?

Moreau: We used a Rode VideoMic Pro. When we were running around the city we’d pull off the top handle and use a Rode VideoMic Pro and a Canon 24-105 f/4 IL and a monopod. Two SD cards would give us four or five hours of recording, and a long-life battery gave us the same amount of time, so we could really hop on buses in London or go on the back of a bike and we didn’t need another piece of gear.

When we did our interviews, or anything where it was more separated from the camera, we would use a Sennheiser MK416 shotgun mic and run a cable into the handle. Somebody on our team would hold the boom pole or we’d have it up on a stand.

Filmmaker: What lenses did you have?

We also brought a 24-70mm f/2.8 as an option when we shot interviews or we were shooting something where we wouldn’t have time to switch lenses. It also makes it possible to punch in just a tad here and there. We bought two sets, so each camera had the full prime set as well as the two zooms available to them.

Filmmaker: Did you use an external monitor, or did you use the LCD panel and the viewfinder?

Filmmaker: Did you use the push auto-focus function? 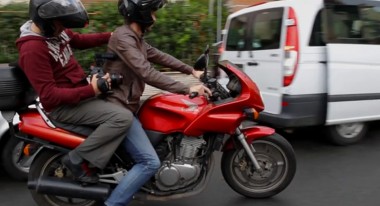 Shooting on the back of a bike.

Filmmaker: Did you use the camera with the side-handle off?

Moreau: We definitely did. There were several situations where we were doing interviews with multiple cameras in very compact situations and we really had to pare down the camera as much as possible. We would actually remove the side handle so that our A and B cameras were right next to each other.

Filmmaker: It’s been pointed out that you lose some ability to change the ISO and other settings without the side handle. Was this a problem for you?

Moreau: When you remove the side handle you are losing the joy stick. In our scenarios it wasn’t a problem because it was an interview situation where we’re not needing to change settings. We’d get set up and then strip the camera down in size and start rolling.

I didn’t have a problem so I can’t really comment on it. I do know that you can also assign buttons, so while it may be more difficult, and you do lose controls if you remove the side handle, the first thing I would do is reassign the buttons that are lost and see if you can function that way.

I can say we were fine in our situation because we were running two cameras on an interview and our settings were ready to go and we didn’t need to switch anything.

Filmmaker: Have you done much intercutting with material from the C100 and material shot on DSLRs?

Moreau: We just wrapped a one-hour feature for the Super Bowl that is being shot with the C100, C300 and DSLRs. All the interviews are C300 because that was what the camera operator had, and the B camera is a DSLR and we’re shooting B-roll with the C100. So that’s all being cut together.

We have a lot of projects where the cameras and codecs are being intermixed. I’ve found we’ve been able to match the DSLR and the C100 fairly easily. They certainly have a look to them that is different. No matter how much you flatten out the DSLR footage it still comes out feeling a lot punchier than footage from the C100. I’ve found that if you bring it closer to the DSLR look in post you’re totally fine. I haven’t had any problems merging them whatsoever.

I’ve always found the Canon cameras have more of a similar look, and that they seem easier to match skin tones and colors shifts and things like that. They all seem to be fairly consistent. I find it’s very easy to match a C300, C100 and a Mark III, much, much more so than matching say a Mark III to a Red or another camera manufacturer.