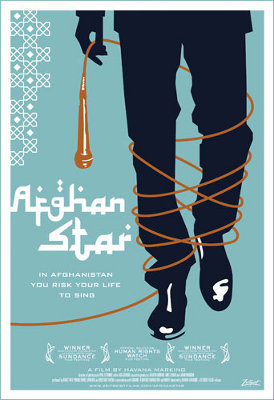 If you thought you were crazy about American Idol, imagine if you grew up in an area of the world where singing and dancing were forbidden. Well, that’s what director Havana Marking highlights in her moving documentary which follows four contestants competing in the wildly popular TV show Afghan Star.

Since 1995 the Taliban have made it illegal to sing or dance in Afghanistan. But recently with the Taliban fleeing the country a freedom of expression has surfaced that’s unlike anything the country has seen in a brutal, war-torn 30 years. Starting in 2005 the TV network, Tolo TV, in Kabul capitalized on this liberation by creating the singing contest Afghan Star, which, like American Idol, travels the country searching for the best singers and then eliminates them until they get down to one. But unlike Idol the fandom over the singers is Beatlesesque, leading to the contestants having the loyal support from the regions they are from and dangers they had never contemplated.

Though Marking structures the film in the vein of popular competition docs like Spellbound or Wordplay — highlighting the trained musician (Hameed), controversial songstress (Setara), the heartthrob (Rafi) and the shy siren (Lema) — finding out who wins isn’t necessarily what keeps you in the film, it’s watching the rebirth of culture, the arts and the feel of community to a people who are climbing back to modernity.

When the film begins there are ten contestants left and favorites are beginning to emerge. Rafi often travels with an entourage as he walks the streets of his hometown, but is often cautious of doing interviews for the film in public or taking pictures with fans as the fear of the Taliban is still present, or just someone harming him who is against the “new Afghan.” Danger is also most evident to the two female contestants Marking highlights. Setara is a brash kid who has no fear on stage. This is highlighted when she’s eliminated from Afghan Star and while singing her final song takes off her headdress and begins dancing around the stage. Even in a more liberal Afghanistan this is forbidden for women to do. Setara spends the rest of the film fearing for her life as she tries to return back home. Lema, on the other hand, is more conservative in her ways, but as she’s from a region where the Taliban still has a presence, she also fears for her safety when she returns home.

Marking also looks at the people who watch the show. Whole villages gather around a small TV to watch the show. A family rig a long antenna so they can get the show (TV repair business in the country is booming). Fans of contestants form campaigns, passing fliers and drive around imploring people to vote. In a lot of ways its the country celebrating their long awaited chance at democracy.

Winner of the World Cinema Documentary Audience and Directing prizes at Sundance in 2009, regardless if you’re a fan of singing competitions or not, the stories Marking highlights are inspiring.