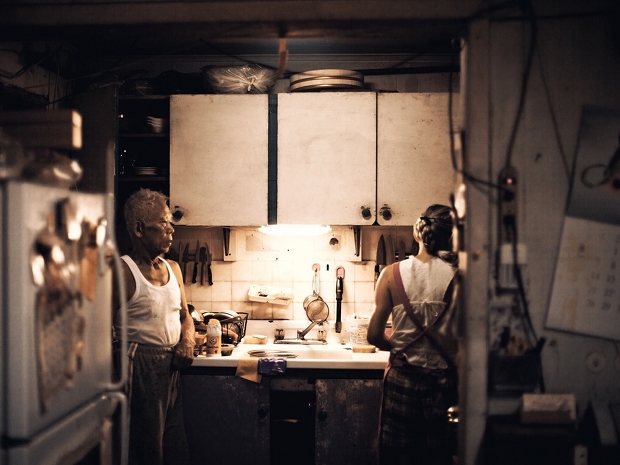 Cutie and the Boxer functions as a love story about a couple and their devotion to their individual art. Zach Heinzerling’s directorial debut concerns itself with the difficulties of marriage, but also the trials of being an artist. After meeting Ushio and Noriko Shinohara in Brooklyn through a friend, Heinzerling was immediately fascinated by their relationship and lifestyle – two extremely different artists in attitude, age, and craft who have been married and lived together for over 40 years. Cutie and the Boxer came together over five years. Two or three years spent solely on getting to know Ushio and Noriko personally, one year on shooting, and another on editing. While Heinzerling admits that he does not know very much Japanese, he achieves an insider’s view that creates a truly intimate snapshot of Ushio and Noriko’s complicated relationship. Cutie premieres today at the Sundance Film Festival in the U.S. Documentary Competition category.

Filmmaker: You had help from many different institutions (the IFP, the San Francisco Film Society, the Film Society of Lincoln Center, Cinereach, the Jerome Foundation, the Tribeca Film Institute, the New York State Council for the Arts, and the Berlinale Talent Campus) to make Cutie and the Boxer. Could you have made this film without their support? And how did this assistance shape or reshape your documentary?

Heinzerling: I definitely could not have made the film without the support of these institutions. With the exception of the final editing phase of the film, I’ve always had other work during the making of Cutie. For a long time I viewed this as a side project—never really knowing what would come of it. I worked on Cutie for about two years before applying for my first grant. I didn’t want to submit until I had enough material to cut something together that represented the tone for the film I wanted to put forth; an intimate, observational story centered on the couple’s relationship. It wasn’t until I received the first grant that the film became more of a reality for me and subsequently I began focusing a lot more of my attention on it. That first grant is so crucial, especially for an inexperienced director. It lets you know that someone important believes in what you are trying to do.

Filmmaker: There is an extremely tough but moving moment in the documentary about the difficulty of making and sustaining one’s art. Is this something you have ever found yourself struggling with personally?

Heinzerling: I would never want to compare my struggle as a filmmaker to that of Ushio’s or Noriko’s, as I’ve only just begun my career and together they represent well over a century of dedication to their practice. But I do think that the making of this film has some tangential relationship to themes expressed within it: namely the inability to shed your creative blinders and achieve a larger perspective when you’re being led by an intense passion for something. I became obsessed with my subjects and with documenting their story. It became difficult to determine when to stop filming. When your subjects are living, and their lives are the subject of the film, the story perpetually unfolds. You have to determine what story you want to tell, and when that story is over. No matter how honest you try to be to your subjects, in the end the film is your version of their lives, and is as much your voice as the voices you are documenting. It can be difficult to balance the responsibility you feel towards accurately portraying your subjects’ story and your own interpretation and creative projection of it.

Filmmaker: Why did you choose this story?

Heinzerling: Honestly, it was mostly because of my fascination with, and love for, the characters.  We are like family.  I enjoyed the most formative period in my short filmmaking career learning through the example Ushio and Noriko set—unbridled passion and energy towards their work, and a risk-at-all-cost mentality. I loved filming them. They are beautiful to watch, whatever they are doing – cooking, making art, getting ready for the day.  They are a cinematographers dream to shoot, and their space adds to that as well.  I was seduced by this magical world they live in, where reality seemed so distant, and everything became art in this strange way.  They live by a different set of rules than most people.  They have no pretensions or holdups, they don’t judge and they don’t worry about being judged.  They live for art.

Filmmaker: Have your feelings and opinions of art or relationships changed through the course of making this film?

Heinzerling: Certain opinions in regards to art were altered or sometimes strengthened as a result of making the film. Especially, the notion that you really cannot know someone’s art without understanding the artist first—something that might be obvious to many, but feels less and less relevant today. So much of the art world is about aesthetics and first impressions. But art is by definition the application of human expression; it is inherently creative and linked to it’s source. Individual judgments of Ushio and Noriko’s art from an aesthetic perspective range widely. Ushio’s art in particular suffers commercially from being too confrontational or drastic for many people’s taste. But Ushio’s performative personality—his larger-than-life presence—defines his art.  As he puts it: “The action is the art.”  You cannot separate one from the other.  The same is true of Noriko’s art. I am interested her work because of the line between fantasy and reality that it walks.  Noriko’s work is an exaggerated extension of her life, and within that exaggeration a deeper understanding of her reality is established.  I’m most interested in art that has an opinion.

Filmmaker: What do you feel that the audiences should or will take away from the Cutie and the Boxer? Is there one specific message here?

Heinzerling: There isn’t one specific message. The film deals with a myriad of issues.  But one thing I’ve taken away from making the film, and what I hope the audience will take away from watching it is that love is impossible to define. Relationships work or don’t work for reasons we cannot always articulate. Ushio and Noriko’s relationship is endlessly complicated. They describe it as a mutual dependence, void of any romance—purely a creative partnership. One of the biggest challenges in this film was to shed light on the love they have between each other, even if they rarely express it directly. In the end, I hope that audiences will recognize themselves in Ushio and Noriko’s story, and consider their own relationships after watching.