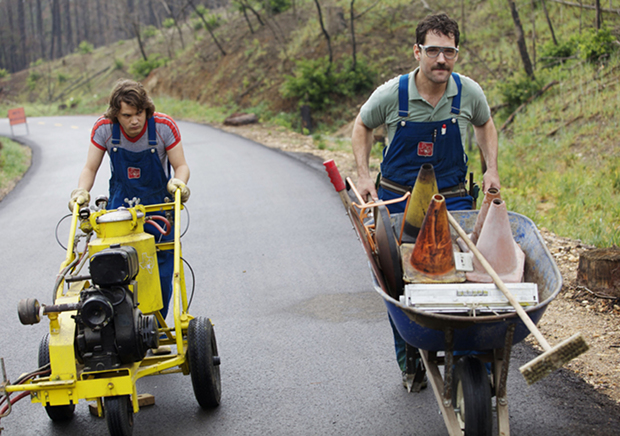 by Alexandra Byer
in Directors, Filmmaking, Interviews, Sundance
on Jan 20, 2013

In 2011, an Icelandic-British film called Either Way won Best Film and Best Screenplay at the Torino Film Festival. Just over a year later, David Gordon Green, an American filmmaker whose own projects have debuted at Torino, has remade Either Way into the comedy Prince Avalanche starring Paul Rudd (Knocked Up) and Emile Hirsch (Into the Wild). The movie studies two men who leave their city lives to paint traffic lines down a wrecked highway. As they move through the hot summer and learn more about one another, an unexpected friendship develops. Much to everyone’s surprise, Green pulled off shooting this feature film in Texas over the summer with little to no publicity. Shooting with a small crew and working with people familiar to Green, Prince Avalanche was a tremendous experience that he would love to replicate.

Filmmaker: Why did you choose to remake Either Way? And what was the experience like?

Green: I had been looking to make a minimalist character piece with two primary actors in this burnt up state park in Texas. My friend Matt Munn told me about Either Way. When I saw the film for the first time it immediately became the perfect model for what I wanted to do. It was also a story and concept that spoke to me in a way that the original film didn’t really explore, so I said, “Fuck it, why don’t I see if the Icelandic filmmakers would be kind enough to let me remake it?” Thankfully they were. I had ideas of ways I could personalize it and spin it into a slightly more surreal drama and it would fit my backdrop in the burnt up woods. It turned out to be a lot of fun. With a small group of my friends, we able to entirely eliminate everything that is frustrating about making movies and capitalize only on what inspires us. It was an absolute joy – like swimming with turtles at summer camp when you’re a kid. I’m hoping to remake it again.

Filmmaker: You actively tried to keep the filming of Prince Avalanche quiet. Why?

Green: We didn’t “actively” try to keep it quiet. We just minded our own business and the movie happened. Press announcements are typically made from a production when you need to pretend your movie is happening to hustle investors and foreign sales people into locking in their financing. Another reason might be when you’re trying to use public perception of your project to manipulate a political situation. And I suppose some people just like to see their names in headlines. We didn’t have any of those needs for this movie. I have learned that when you talk at length about a film before you’ve made it, you can distract yourself from opportunities that might arise during production because of the bullshit expectations you created. So for my health, I’d say there’s no real reason to call attention to your work before it’s completed if you don’t need the hype.

Filmmaker: You have been getting a bit of flack recently for making Blockbuster comedies and “straying” from your original roots of small, independent films. Some see Prince Avalanche as a sort of comeback. Care to comment?

Green: I haven’t gotten much in the way of flack from anyone that knows me personally. Although I would imagine some of my choices confuse folks that don’t know me. I’m making different types of films for different types of people. I’m not one of those directors that has a hard core fan base, but that’s okay because I don’t have the pressure those guy shave to be a genius or to be consistent or whatever. I don’t feel like any of my films have been less than independent. In fact, the two that I feel had the most hands off creative freedom and “independence” in my career would be the biggest budgeted studio financed films I directed and the biggest commercial I directed for a major corporation. The only truly independent film would be one you self financed but that’s probably a larger discussion. The point is, I work all the time: films, television shows, TV commercials, screenwriting jobs. Sometimes it is anonymous work that no one knows I even did. Often it is work that few people pay money to see and sometimes it is work that millions of people see. It’s insane to think about sometimes, but I’m really grateful for all of it. I wouldn’t even really know how to associate the words “blockbuster” or “comeback” to my career because that would require more reflection than I choose to use. My professional decisions are also my personal decisions. They are always driven by an appetite I have in the moment. I’m a pretty hungry person. I’m greedy for experience and adventure and what’s next. I love what I do and the people I work with so much. I find it most rewarding to use this industry as a way to explore, experiment, and learn about myself and all the crazy shit in the world. It’s amazing. Regardless of a project’s perceived success, my work always speaks something about whom I was at the time of its creation.

Filmmaker: The last film you had at Sundance was Snow Angels in 2007. What is your attitude towards being in Park City this year?

Green: This is one of the greatest festivals in the world. I’m extremely excited to be back and present our movie, but it’s way more fun and less stressful to come when you don’t have a movie playing. I’m a huge movie junkie and so it’s really frustrating to be within arm’s length of all these films I want to see and filmmakers I admire, yet ultimately I’m here to work hard and promote Prince Avalanche.

Filmmaker: You have worked with the band Explosions in the Sky, who is scoring Prince Avalanche, before on your earlier films. How did it feel to get back in the studio with them?

Green: Explosions are great friends of mine and a hell of a band. You should see them live if you haven’t. The first time I saw them is maybe the only time in my life I have levitated. It was very cool as always to work with them and it was an even greater pleasure to design a score exploring sounds and musical concepts they had never used before on an album. They collaborated with my best friend, the composer David Wingo, who has worked on most of my films. It was a blast getting everyone together and hanging out and working hard. It’s always a real privilege for me. These guys are like athletes. They don’t quit. They just keep fucking rocking until they stop and then they go to sleep for a while. I bet they have weird dreams. The effort everyone put forth on a shoestring budget was inspiring and really matches the camerawork and performances as key fingerprints of the movie.