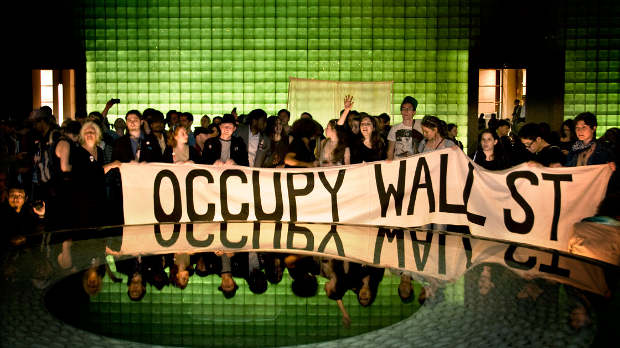 Downtown Manhattan, September 17, 2011—the first 1,000 protestors of the Occupy movement descend upon Wall Street and its neighboring Zucotti Park, pounding the cobblestones in the face of corporate neglect. Driven by the ever-expanding gulf within the socio-economic bracket, this modern day iteration of class warfare soon sparked a worldwide phenomenon. As fervent opinions batted about and media biases multiplied, documentary filmmakers Audrey Ewell and Aaron Aites sought to craft a holistic, honest portrait of the movement. Their resulting film, 99% – The Occupy Wall Street Collaborative Film, utilizes footage from filmmakers—novice and professional alike—from across the nation, in order to investigate the implications of power, the meaning of rights, and the cause of action.

Audrey Ewell spoke with Filmmaker in advance of the film’s Sundance premiere, and shared with the magazine an exclusive clip from the movie.

Filmmaker: What was your personal involvement, if any, in the movement? At what point did you decide to turn the protest into a documentary?

Ewell: Aaron [Aites] and I started the film from the perspective of filmmakers, not protestors or activists. We’re not part of the movement and never were. No one in a directing or co-directing role was, though a few of the others were involved. So, although we get behind the scenes of the movement, it’s fly on the wall verité style, not self-documentation, which could so easily swing toward propaganda. That was one of just three rules we established before filming began: no propaganda.

I decided to start the film on the day 740 people were kettled and arrested on the Brooklyn Bridge and it didn’t make the news. I’m really glad I felt compelled to do this, because the feedback we get again and again from early viewers is that they thought they knew what the movement was all about, until they saw our film. So I think the mainstream news media really kind of fell down on this one, and independent documentation was required to tell this story truthfully and accurately.

Filmmaker: Occupy was — and is — not exactly a middle of the road issue. Do you feel that the film duly portrays altering sides of the equation, and how did you set out to achieve this objective stance?

Ewell: Objectivity isn’t difficult to achieve when you don’t have a political agenda. I don’t think there are two sides, I think there are 7 billion. I was interested in documenting this moment in time, this movement, in a way that wasn’t happening via mainstream news channels. I wanted to look at the macro and the micro, see where this movement came from, who was behind it, how it was organized, what it was all about, and where it might be heading. I wanted to look at its impact on America, and I wanted to make a film that would tie together all the socio-political and economic factors that had led to this turning point where people from all walks of life all across the country would take to the streets en masse and say, “Enough.” My agenda was to understand, and to create a window through which others could look and also achieve greater understanding. It also seemed interesting to try an experimental production process that would inherently achieve a more objective view by combining a multitude of subjective voices.

Filmmaker: What do you hope will be the audience’s chief takeaway from your film?

Ewell: That everything is connected, that all the issues that the movement shone a light on revolve around the reality of who has the power and how it is applied. We show that corporate, financial and political power is being wielded behind the scenes whether people are paying attention to it or not, but that if you’re not paying attention and taking part in the conversation, your interests probably aren’t being protected. I think that’s what the Occupy movement brought to light in a sort of diffused, chaotic way, and with the film we’re able to catch all those refractions of issues and ideas and craft them into a cohesive portrait of what’s going on behind the scenes.

Filmmaker: Can you speak about the challenges of documenting a rapidly evolving event as opposed to a more tangible subject like black metal, which you chronicled in your previous film Until the Light Takes Us?

Ewell: The core of both films is actually very similar: we didn’t like the way history had been written or was being written, so we decided to make a correction to the record, while also trying to reveal some sort of larger truth about the way society operates. With Until, it was about weeding through all the misinformation in books, TV programs, articles, interviews, news reports, etc. and reconstructing a true portrait of this once obscure and violent metal scene. It was more akin to portrait restoration, albeit of a very exciting picture. We were fortunate to have these complex, intelligent, passionate characters as foils, one-time best friends whose politics had pulled them in opposite directions (one into leading a wave of church-burnings, and the other into musical obsession.) So that one was also a story about loss; loss of identity, of culture, of friendship. And in 99%, it’s about painting the picture from scratch, and pulling back the curtain on power. Where Until is contemplative and elliptical, 99% is exciting and fast-moving as we chart the trajectory of a national movement’s propulsive beginning.

Filmmaker: As the title emphasizes, 99% was wholeheartedly a collaborative process. How did you go about selecting your co-directors for the film, and what was the editing process like once all that footage was collected?

Ewell: The film was designed to be an unaffiliated parallel experiment – to test the processes of the movement in a real-world, goal oriented context. So we had three rules: 1) Anyone and everyone was welcome to make the film with Aaron and I. 2) As more experienced filmmakers, we would guide the process and handle big-picture stuff. 3) This film would not be propaganda. We initially tried to use a modified consensus process via an email list, but it was complete chaos. People with no film experience would derail conversations and wanted to talk about which bands would be in the film – before we had an outline.

But look, we knew going in that we were trying an untested collaborative process, and that we’d have to adjust – that was all part of the experiment. So Aaron and I wrote up a provisional outline, gave it to the group who expanded upon it based on their interests, and people either stepped forward to take on parts, or I asked some if they’d like to direct segments on certain topics. Those became our directors and co-directors, and I worked closely and intensively with all of them to make sure we were making something that could form a cohesive film.

I also found out what skills everyone had, and for those who really weren’t up to or interested in filming, I found other ways for them to be involved – so we have digital and social outreach managers, and we have web developers, and we have graphics people, etc. And then I broke down the list into geographic groups, and worked with each group to make sure that important events were covered in their region. I coordinated national shooting days as well; for eight months straight I was working 100 hour weeks, trying to manage a project that was much bigger than one person, yet which needed centralized oversight to stay organized and come together. To be honest, the workload was brutal.

Co-directors and directors worked on pre-edits with co-editors, then their edited pieces along with all the raw footage from all the contributors was catalogued in our massive hard-drive array. Meanwhile, Aaron and I had been working with the first of three editors to form the backbone of the timeline of the film, and then we integrated all the directors and co-directors threads and sub-threads into the final film. We used their pre-edits as guides of intent, but essentially had to pull it all apart and weave everyone’s footage/threads together, integrating work form various directors, co-directors and shooters into one complete film. We often had to go back to people and ask them to do pick-up shoots because we didn’t have essential information, or because we didn’t have enough b-roll, etc. Aaron and I ended up working with three different editors plus 4 co-editors, 2 additional editors, 3 assistant editors, and our post production supervisor, James Salkind deserves a medal for helping us set up systems that would allow for this to run more or less smoothly.

For the first couple months of the edit, we had weekly screenings, so the core NY team could offer feedback, and then as deadlines got tighter, Aaron and I started to work more intensively and screenings became fewer. We gave the other NY directors, Lucian Read and Nina Krstic, access and took their input, but there were a few months of intensive, long editing sessions that just needed to be really directed, [so] Aaron and I handled big-picture stuff like that. The thing is, even though Aaron and I put in a ton of work, the film is not the one that he and I would have made alone; we were more like shepherds on this. 99% is indeed a collaborative effort that represents the voices and visions of many people. This is a film that wouldn’t and couldn’t have been made without this giant number of people contributing a lot of work and love to make it happen.