Five Questions with Would You Rather Director David Guy Levy 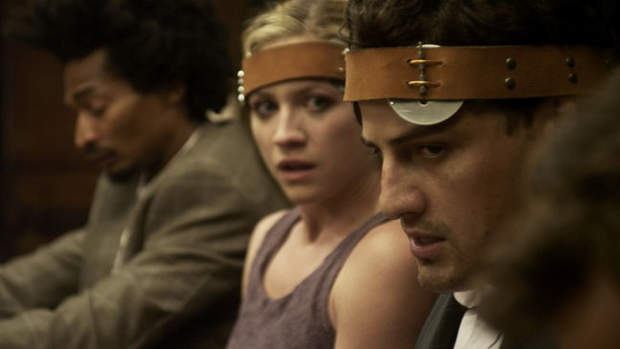 by Billy Brennan
in Directors, Interviews
on Feb 8, 2013

Actors, David Guy Levy, Horror, Jeffrey Combs, Would You Rather

David Guy Levy’s Would You Rather takes the cruel purity that lies under the surface of children’s games and takes it to the extreme. Gone are schoolyard pranks, naive sadism and the ability to “chicken out.” In their place are deadly stakes, earnest schadenfreude and no escape. Citing Kubrick’s Eyes Wide Shut, Jonathan Lynn’s Clue and Agatha Christie as influences, Levy dove into the project with gusto. And armed with a host that would match the childish glee of the game’s inspiration (genre icon Jeffrey Combs), the director succeeded in crafting a memorable and poignant twist on a familiar pastime. Filmmaker discussed the film’s origins, its effect and the genre with Levy.

Filmmaker: How did you get involved in the project?

Levy: The writer Steffen Schlachtenhaufen approached me with a simple pitch. “What if we made a movie about a game of Would You Rather, but in our version, whatever you chose you then would have to do?” It was that simple question that lead to an exciting process of writing a treatment in just weeks. After showing a few people and finding we weren’t the only ones who were excited about the idea, we began writing the script. Then before we knew it we were filming just a few short months later.

I had just finished my experimental film, A Love Affair of Sorts, having made it primarily as an exercise. We filmed it for under $1000 dollars without a script, a crew, or any commercial expectations. The film helped me grow as craftsman, but not so much narratively since we found the story as we went along. After its release, I realized that I wanted my next effort to show what I was able to offer narrative-wise, and I hoped to do that with an idea that was the commercial opposite of what I had just made. I feel Would You Rather was the right choice.

Filmmaker: Horror is so reliant on mood and timing via subtle manipulation of image, as well as sound. What was it like collaborating with composers Daniel Hunt and Barði Johannsson, as well as d.p. Steve Calitri?

Levy: I was introduced to our composers through my amazing music supervisor, Howard Paar, after he heard they were looking to score a film together. I was familiar with Daniel’s work with Ladytron, and Barði was an artist I had yet to stumble upon. Thanks to the magic of Skype, we would watch the film together between Los Angeles and Iceland, and spend hours upon hours talking about the work we were doing. They brought a maturity to the score that really heightens the movie and allows for the audience to get wrapped up in the game.

Steve was an amazing cinematographer to work with. Weeks before shooting, he moved into my house and spent every spare moment working on the shot list with me. We planned out every moment and how we might approach is as diligently as we could, and the shot list itself was as long as the script. We even went to the length of pulling swatches from Home Depot to give out to the art and wardrobe departments, dictating which colors they should work with.

Filmmaker: Horror and humor are two sides of the absurd. How important was it for you to balance the two?

Levy: I definitely didn’t want this to be a “comedy”, but there are moments of tension in the film that can only be alleviated with the element of comedy. Just when we think you’d want to take a breather, we try and give you one. It helped having Jeffrey Combs playing a character who enjoyed the event as much as he did, because whenever something bad happens, chances are he’s watching and loving it. And that was us in the writing room, trying to laugh away all the creepy ideas that presented themselves to us.

When Jeffrey’s name came up in casting discussions, it was as if a light bulb went off. Finally here was an actor who seemed so perfect for the role we had written. His previous work stood up to our high expectations of what that character should be, and we made an offer without hesitation. It was as simple as getting him the script, and after only having it for a day he said yes.

Filmmaker: The film ends with multiple surprises. Why was this the proper ending for this movie?

Levy: Iris puts her life on hold and tries to do anything she can do to help her brother, Raleigh. She proves over the film that she is willing to sacrifice anything, even her morals, to make sure he is taken care of. Once Steffen and I realized this fact, we then asked ourselves if Raleigh would be willing to do the same in return. If he saw his sister was putting her life aside for the sake of his own, what choices might he make to change that?

Filmmaker:  How does the film stand out from other genre fare? What does having a “kids game turned bad” aspect to the plot add?

Levy: I made a conscious choice not to make this a gore-fest, unlike most genre fare being made these days. The scariest things about this story is the situation these people find themselves in and the choices they’re forced to make. As decisions are made, and actions are taken, there is nothing better than letting people imagine what they saw over actually showing it to them. So while occasionally we see them doing things they don’t want to be doing, I find the choice to focus more on the reactions of the other people in the room to be much more satisfying then watching gallons of blood spill on a floor.

The family hosting this game are essentially “kids turned bad”, so the fact that the night centers around a children’s game seems fitting. The film is about decision-making in its rawest form, and having a bit of sadistic fun while doing so. You know, kid’s stuff.