Interactivity Through Biology with many worlds 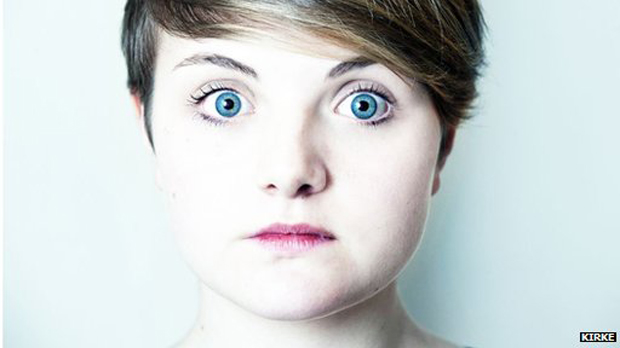 The words “interactive film” obviously evoke some kind of audience engagement, but what that actually means can — and does — change with every project. While there have been a lot of innovations with screenings in public venues, interactive films often tend to play best online or on mobile devices where viewers can input information and make narrative decisions.

The new short film many worlds seeks to turn this on its head a little bit and redefine interactivity by, first, making it completely unconscious for viewers and, second, allowing it to take place in a traditional theater. Billed as “a film that watches you while you watch it,” many worlds was conceived, written, and directed by Alexis Kirke, a composer, technologist, and member of the Interdisciplinary Centre for Computer Music Research at Plymouth University in England. At each screening, four audience members volunteer to have either their heart rate, muscle tension, brainwave activity, and skin conductance (perspiration) analyzed. This data is fed into a computer algorithm to make editorial and musical decisions: if audience members are relaxed the score becomes more striking and discordant and/or the scene shifts to a tenser situation. If they are too tense too soon things may let up a bit. This process determines both the rate of cutting and the actual scenes presented, meaning that Kirke and his crew had to create four different endings, which will be selected by the audience’s physiology at each individual screening.

Kirke, who has a history of innovation in creating new music with objects like the sunrise or waves on water, is dubious about interactive cinema’s success so far: “There is no such thing. If it is interactive then it’s not cinema . . . [At the cinema] we want to forget the world around us and be drawn into the wonders of the screen and the sound system. The idea of somehow giving buttons or joysticks to people in a cinema to control how the characters in the movie behave is ridiculous, it would destroy what most people love about cinema: the gloriously immersive world.” Many filmmakers and transmedia producers might argue with this position, saying that an audience member’s conscious interaction with a production creates a new sense of engagement that’s no less legitimate than the passive viewing experience described by Jean-Louis Baudry and the metaphor of Plato’s cave, where viewers are sutured into the screen without any consciousness of their own autonomy or the outside world. It seems to run counter to the audience’s experience at Bill Morrison’s interactive film I attended a few months ago, where viewers were given a laser pointer to make editing decisions with Morrison’s (non-narrative) footage.

But Kirke’s point is valid on many levels, especially with dramas: interactive films are neither fish nor fowl, not quite video games but not linear narratives either. The technology he’s developed helps replicate the feel of a linear film: many world‘s plot, about a college student who’s trapped herself into a high-tech suicide machine, proceeds from A to Z without any conscious involvement of the audience. But the result is unique at every screening, the essence of interactivity. Like a theatrical troupe reading their audience as they perform, the film itself can now adjust to further engage spectators, stymieing boredom if not completely rewriting the screenplay with every screening. And — while this technology presents great opportunities for avant-garde filmmakers and video artists — that’s the direction Kirke envisions this technology going in: equipping narrative films with the ability to adjust pace, music, and perhaps performances to create the ideal film for a particular audience at a particular time. In fact, he thinks it possible that the biggest way this technology may be picked up is with major studios in their test-screening and development process, which could save them millions of dollars in lost revenue on the high percentage of films that don’t, or that barely, recoup costs. At any rate, “it is surely only a matter of time,” he says, “before our films start watching us and changing accordingly — even if only their edit speed and sound elements. In-cinema cameras pointing at an audience can pick up if they’re restless, scared, etc., and the films will react intelligently.”

This kind of “editing-by-group-subconscious” may or may not catch on in Hollywood, but it surely provokes some interesting thought about an audience’s relationship with each other as much as with the film on the screen (something I discussed in connection with Morrison’s film) — and now with their own bodies as well. Perhaps more importantly it provides some innovative new tools for interactive filmmakers. There are lots of ways this technology can be used with short films, video installations, and even documentary, and hopefully we’ll see it rolling out in different ways in the coming years. If nothing else, it is certainly an auspicious way for Kirke to make his filmmaking debut.

many worlds will premiere on February 23 at the Peninsula Arts Contemporary Music Festival at Plymouth University.