Gambling on a Distribution Strategy 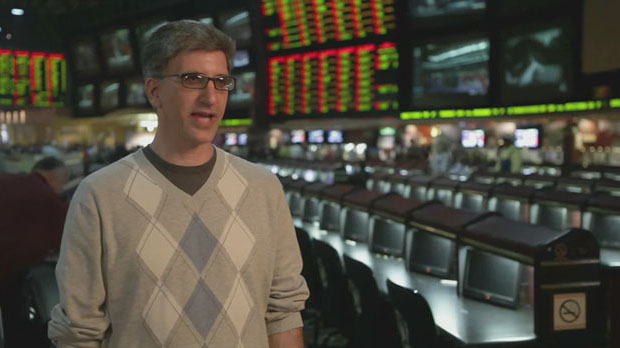 Life on the Line

by Isaac Feder
in Distribution, Filmmaking
on Feb 27, 2013

Distribution Strategy, Life on the Line

Until I shot Life on the Line, I never realized how much independent filmmakers and professional gamblers have in common. Many of us leave our hometowns, move to the center of the action, and risk everything to make it in a nerve-wracking and highly competitive environment. Every bettor is a long shot to succeed, just like filmmakers who dream of making their first picture in Hollywood. After spending the last two years meeting, interviewing, filming, and befriending some of the most colorful and successful bettors in Las Vegas, I can honestly say that we’re a lot more alike than I ever expected.

This was the underlying theme of the movie: everyone comes to Vegas with grandiose dreams, but they rarely, rarely work out as planned. An elite few who are good enough, sharp enough, and work hard enough can beat the sports books and odds makers over a long period of time and turn gambling into a career. It was conveying their story — one that had never been told with accuracy in any movie before — that became my goal. A story that was specific, authentic, yet universal, showing extraordinary people who thrive in a world of overwhelming risk.

The strategy of the documentary was simple: I assembled a lean, talented team of three producers (one did sound, one edited) and a cinematographer, and we focused on a single event — the Super Bowl — to tell the story of professional gamblers preparing for the biggest betting event of the year, with a ticking clock of the week leading up to game day.

With the big game as the backdrop, the film was essentially a character piece. What kind of person gambles professionally? What are the risks they assume? How does their obsessive, round-the-clock business affect their personal lives? And what is it about Las Vegas that defines their culture? Underlying it all is the hypocrisy that while sports betting is legal only in Las Vegas, every newspaper in the country publishes the betting line for all to see.

Principal photography took place in February 2011, and we had a solid rough cut of the film assembled by that summer. We submitted it to Sundance and a few other film festivals, and were rebuffed by all. I also submitted the film to the Paley Center for Media in New York as an entry in its Documentary Pitch Fest competition for finishing funds. Mine was one of five films chosen as Paley Center finalists, and won honorable mention for second place. Alas, no finishing funds.

I screened the cut for Matti Leshem, CEO of Protagonist, a brand strategy and production company in Beverly Hills. I had done freelance work for him in the past, and always admired his taste, vision, and ability to bring big ideas to fruition. With an instant enthusiasm for the film and its authentic portrayal of the gambling subculture, Matti came on board as executive producer. We partnered to finish the film.

The Protagonist marketing methodology employs a model when working with large clients: fanatics, fans, and followers. It’s a way to get noticed in a universe of a million channels. We identified the core audience of sports betting enthusiasts and gambling aficionados, and searched for a place they’re already aggregated. The obvious choice was LasVegasAdvisor.com.

Anthony Curtis, the president of the site, had an existing partnership in place with Steve Fezzik, a sports betting champion featured in the film. The site is a destination for Las Vegas tourism information, and receives more than 150,000 unique views per month. We agreed on an exclusive window to distribute the film, enhancing his site by giving exclusive content in exchange for delivering an audience guaranteed to respond to the film.

We cut three trailers and strategically rolled them out on the site. The next hurdle was finding a credible technology to deliver the movie, as well as a payment mechanism. In searching for that company, it’s crazy how many companies want to be in this space, but are still ill-equipped, or in various stages of beta – without proper answers regarding capability and bandwidth. Customized digital distribution is on the horizon, but still only in its infancy.

After an extensive search, we partnered with PUMit.com, which provides a technology that allows viewers to buy content directly without any subscription process after having paid for it through PayPal. PUMit creates a unique purchase link that can be posted on any website or social network while transferring funds directly to the filmmaker’s account.

The last piece to our distribution plan was to get media attention, and the best way to do that is with a film premiere. I asked Jay Kornegay at The LVH Hotel and Casino in Las Vegas to host a red carpet screening. He runs the SuperBook, the world’s largest race and sports book, and has been a friend of the film since its inception. The Saturday evening before this year’s Super Bowl, in the same theater where Elvis once performed regularly, we hosted the world premiere of Life on the Line. More than 300 people attended the screening, the cocktail party, and it was an unforgettable night. The premiere was covered extensively by both local and national press, garnering 28,376,395 media impressions that helped raise awareness of our digital distribution plan via LasVegasAdvisor.com and PUMit.

For us there were no barriers to entry – no licensing deals, no permissions from Netflix or iTunes or other digital distributors. It’s a very exciting time to be an independent filmmaker, knowing if you make a film, at whatever the budget, it can be distributed and find its audience. Since the film’s release just three weeks ago, it has been selling at a rate of about 30-50 downloads per day. We are already well on our way to recouping our investment. We’ve received very good press, and now networks are showing interest in the story for a future television project. Looking back, this entire endeavor was a gamble. But you can’t win if you don’t place your bet.