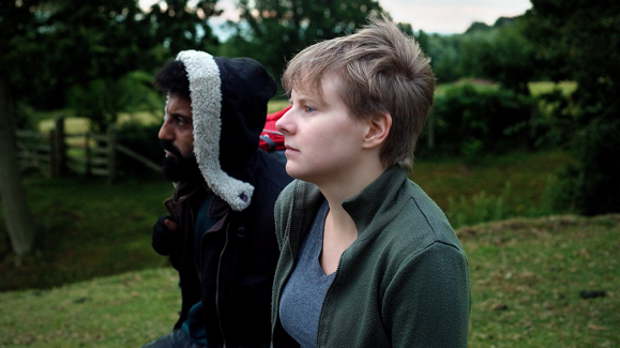 by Brandon Harris
in Directors, Interviews
on Apr 5, 2013

Ron Eyal and Eleanor Burke’s elegant and evocative Stranger Things, which won Slamdance’s Narrative Competition Grand Jury Prize in 2011 is a moody and clear-eyed drama from a pair of our 25 New Faces in Independent Film, as tranquil and refreshing as an autumn afternoon along the rural British coast, where much of its story is set.

A young, lonely woman named Oona (Bridget Collins), coping with the recent death of her mother (with whom she was clearly not close) and hoping to sell the house the deceased woman spent her last years making art in, returns to the home’s seaside village to settle the estate. She quickly finds a shaggy, Arab homeless man named Mani (Adeel Akhtar) squatting there. Frightened, she kicks him out, but after she’s driven him away she discovers a sketchbook he left behind that shows great promise. Tracking him down in a nearby shack, she returns the sketchbook, remarks about its quality and offers him shelter and food.

So begins a delicate and brief friendship as this odd pair try, in fits and starts, to get to know one another and to transcend their disappointments and grief. Shot in a gauzy, standard-def digital format, the film has a delicate, strangely evocative, digitally noisy sort of beauty, but more importantly it tells a story that, without seeming to try, gathers great emotional resonance by its final frames. Lesser filmmakers would make this an occasion for unfulfilled desire, but Burke and Eyal are savvy enough to realize that what they have on their hands is a story about two people who have nothing in common but find each other at a moment in which they both desperately need the kindness of an objective stranger, one who can see through the baggage they’ve accumulated and help them rediscover the person they want to be.

Stranger Things opens at the ReRun in Dumbo, Brooklyn tomorrow.

Filmmaker: How did the two of you begin working together and how did this movie grow out of that collaboration?

Burke: We met at film school at the Graduate Film Program at NYU, and we started working together there. We weren’t co-directing at that point. I did a lot of cinematography, and I started shooting some of Ron’s projects and then we started writing together. This project grew out of that.

Eyal: We started working on short films and short documentaries together as part of the curriculum at NYU. I always wanted to work with Eleanor because she’s such a great shooter and collaborator. We started working on this idea for Stranger Things and I thought it was an excellent opportunity for us to co-direct something. Eleanor really loved it a lot, the idea of making it together and that’s how we want to continue to make films.

Filmmaker: What attracted the two of you to this tale of two very unlikely individuals finding and healing one another?

Burke: The first inspiration was that my grandmother was homeless at various points in her life, and so we were interested in a relationship between people who have houses and those who don’t and what it takes for an individual to cross that barrier.

Eyal: We thought it was such a dramatic setup, looking at these two characters that come from completely different worlds who in ordinary life would have very little reason to connect with each other. We wanted to show a situation where they would be compelled to reach out to each other and form this unlikely connection.

Eyal: I think Eleanor and I were both attracted to these two characters who are so isolated. It was almost akin to a chemistry experiment, where you bring these two chemicals together they can have an amazing reaction to each other.

Filmmaker: The film is built almost entirely around these two performances. Did you write for these actors in mind or was their some sort of rigorous casting process that took place?

Eyal: We wrote the script with Adeel Akhtar and Bridget Collins in mind. We had worked with both of them on short projects before. Bridget was in a short film that Eleanor and I wrote together that had its premiere at Slamdance. Adeel we met through a friend. He was in New York studying at the actors studio. We met him out here and loved him. They’re both English actors. They were the best actors that we knew, and we still consider them among our favorite actors because they’re such risk takers.

Filmmaker: The movie has a rough-hewn naturalism about it that suggests both an economy of means and a desire to tell the story in the most unadorned way possible.

Burke: We are really interested in telling stories that are intimate and that are about very human moments, small moments that have a lot of drama within them. We did write a full script in advance and then workshopped it some, but we never showed the actors the full script.

Eyal: We really believe in giving the actors the room to bring their own creativity to the process. The script was completely written before we started shooting and you want to free them to do the actors work, to bring the character to life through their performance. To this end we witheld the script from the actors, only showing them the scene that we were shooting at that time and we shot the entire film in script order. We thought for this particular project that that really worked for how this unlikely relationship would unfold on screen.

Filmmaker: That takes quite a leap of faith on the actors’ part!

Eyal: They were excited about the idea of working in this way, and we did tell them about their characters and develop these characters with them through workshopping. One really exciting thing that Adeel wanted to do was live in the shed, so while we were shooting it stayed overnight in the shed to get into character. Both of them really started living and breathing the characters.

Burke: To a nearly Daniel Day Lewis level [laughs]. Ron and I and Bridget were living in the house that we shot in while shooting. During takes we tried to keep the apparatus of the filmmaking out of the way of the actors as much as possible to give them a lot of space to create these people and explore the scenes and not feel crowded by a film crew. It was often just the four of us in a room when we were doing the most challenging scenes.

Eyal: A lot of our techniques were deliberate in order to emphasize performance.

Filmmaker: How do you divide the labor in terms of being co-directors?

Burke: Well I shot it. [laughs]

Eyal: We had a small crew of six people. Eleanor was the DP as well as co-directing with me. We had a sound recordist.

Burke: Sometimes Ron also recorded sound if it was just going to be a more intimate scene and we thought it was going to benefit the actors. When we started we had the idea that Ron would engage with the actors on the set almost solely and I’d be more in charge of the logistics and aesthetic of it. But it was such a small set that it was actually more organic than that, and we were able to swap roles and bounce ideas off each other on the fly. We had written the script together, and so we were on the same page and had done so much work with the actors together already that their weren’t any major disputes.

Filmmaker: As the shoot progressed, how did your own perception of what the film meant to you change, if at all?

Burke: You write the script and then it changes during the workshopping and then it changes when you have the actors on the set, some moments become more important than you realized and others become less important. Some moments where the actors would choose a small gesture and something that seemed so tiny suddenly is telling an entire story on its own, these are things that are very difficult to write in a script and you can only just discover them as you go along.

Eyal: Totally agree with that, there are these magical moments that were surprises in a way. After we would shoot a scene and an actor would do something we often wouldn’t expect, Eleanor and I would look at each other and just communicate silently like, “that will be a great moment,” and in fact those moments did turn out to be some of our favorite moments in the film.

Burke: In the edit room as well, there we were rewriting again and finding these moments and bringing out the story in a different way than it was in the script or during the shoot.

Filmmaker: While in post-production, you participated in the IFP Narrative Lab. How, if at all, did that change the trajectory of the movie?

Burke: It was so valuable. I think during post-production that filmmakers need outside eyes, people to give you perspective on what they’re doing. You become so close to your material.

Eyal: Obviously we had a rough cut of the film when we went to the Rough Cut Lab, now know as the Narrative Lab, and it was through that that we met [editor] Michael Taylor. He completely reshaped and reedited our film. Without that, we wouldn’t have the film that we have.