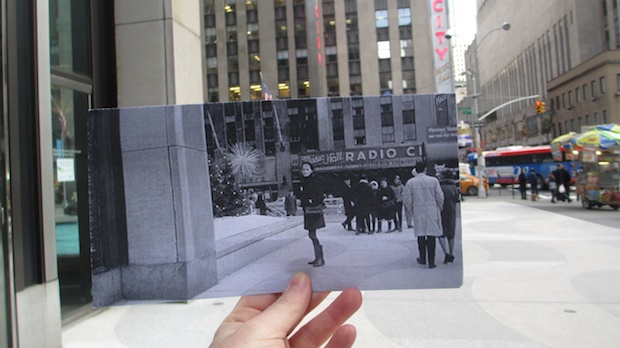 On the rerelease of his collage novel, A Crackup at the Race Riots, Harmony Korine is interviewed by Christopher Higgs at the Paris Review. Here, Korine describes the process that created the book 15 years ago:

At that point in my life I had no idea how to contain my ideas. The creative process was more explosive for me. And I didn’t have a filter, and I didn’t try to filter anything, as much as just try to get stuff down. So, I would just write everywhere. I would wake up in the morning and hear a conversation on the street, like a guy on crutches—this is my own sense of humor—I’d hear a guy on crutches going down the streets and I’d hear him muttering something to himself, something observational, and then I’d write that down on a piece of paper and then I would change his name. I would think, What if Clint Eastwood said that? Or, What if Snoop said that same sentence? Or, What if it was a quote from Margaret Thatcher? I was so interested in how the humor would change or devolve into something else. So that’s how it would happen. I would write things and then I would change the authorship. I would appropriate things from certain places. Then within certain quotations, I would change words around inside it, or changes sentences, or break it down in some way, or add to it in some way. And a lot of them were ideas for other things, but in the end I just liked the titles better. Like, they would be titles for books I would want to write, but I would look at them and I would think, Wow, the titles in and of themselves are exciting.

The first part of our interactive doc storytellers series with MIT Open Media launched with Sarah Wolozin’s post, “Should Filmmakers Learn to Code?” The question has been percolating a lot recently, and not just in the world of film. “Should Everybody Learn to Code” is a “meta media mash-up… the ultimate hyper-linked aggregation” at Pando Daily comprised of what seem like dozens of links from multiple articles on the subject. (I didn’t check to see whether ours was one of them.)

At All Things Digital, Liz Gannes writes about a new crowdfunding platform, Patreon, which allows fans to contribute small, regular payments to their favorite creators.

I’ve been mulling over this post by Danah Boyd over at LinkedIn, “How Would You Define ‘Work’ in a Networked World?” Boyd, who is now a senior researcher at Microsoft, says she has her “dream job”:

I’m a researcher who gets to follow my passions, investigate things that make me curious. I manage my own schedule and task list. Some days, I wake up and just read for hours. I write blog posts and books, travel, meet people, and give talks. I ask people about their lives and observe their practices. I think for a living. And I’m paid ridiculously well to be thoughtful, creative, and provocative.

The problem, explains Boyd, is that the boundary between work and life is increasingly porous, making her wonder whether the distinction is even a valid one anymore — and whether there are problems in erasing that line:

What’s at stake isn’t just that work is invading people’s personal lives or that certain types of labor are undervalued. It’s also that the notion of fun or social is increasingly narrated through the frame of work and productivity, advancement and professional investment.

Labor is often understood to be any action that increases market capitalization. But then how do we understand the practice of networking that is assumed as key to many white collar jobs? And what happens when, as is often the case in the digital world, play has capital value?

From Manifest Destiny: “Google’s Project Glass is Scary Enough to Deserve Some Respect.”

“To Have Done with Contemporary Cinema” — that’s Chris Fujiwara’s piece at N+1 about the problematics of the contemporary art film in a time of digital disruption and festival-based viewing models:

If the outstanding films are never all visible at the same time until the window of their contemporaneity has closed, it means they are truly contemporary only for a small group of people—critics, programmers, and distributors. (The rest of us are like people looking at stars that appear bright but, in their own real time, may have already gone dim.) And if we indeed have a common agreement that this small group can declare what the contemporary cinema is, let’s acknowledge that the conditions under which they exercise their judgment are usually bad. Programmers see almost everything on DVD—usually in an office, at home on TV, on a laptop—or else, like critics, at other festivals, often at the rate of three or four a day, a rate that pulverizes both discrimination and memory.

Also at N+1: Emily Witt considers looks at relationships and our bodies through the prism of San Francisco tech culture, health culture and a shoot at Kink.com.

At Filmography, Christopher Moloney prints — and sells — photos in which still images of films are juxtaposed with their actual shooting locations as seen today. (Rosemary’s Baby on today’s Sixth Avenue is pictured above.) His work is appreciated by Henry Grabar at Atlantic Cities (hat tip, Andrew Sullivan):

Moloney’s methods set his project apart from other composite photo projects, which are often highly technical. “I can hardly use Microsoft Word,” he quips. Like a detective piecing together torn fragments of an image, he holds up his screen-grabbed stills against the landscape. The building don’t always line up perfectly; the colors seldom match. But the dissonance gives the shots meaning. (If you wanted seamless, you should have rented the movie.)

Older films, says Moloney, sometimes produce the lowest level of contrast. In the days when on-location, exterior filming was still something of a novelty, directors wanted New York to look unmistakably like New York. The Empire State Building, the East River bridges, and Central Park have hardly changed since. More recent films that use restaurants and stores for setting, by comparison, end up representing a more ephemeral vision of the city.

“Whenever I see a movie and there’s a bookstore scene, I get very sad, because that bookstore is probably gone,” Moloney says. “I could never recreate that.”

Another Andrew Sullivan hat-tip: A really interesting essay by Jess Nevins in the Los Angeles Review of Books which explains why H.P. Lovecraft is the world’s first open-source author. And why that’s led to his continued popularity. (Transmedia creators take note.)

Too, Lovecraft was the first author to create an open-source fictional universe. The crossover, the meeting between two or more characters from discrete texts, is nearly as old as human culture, beginning with the Greeks if not the Sumerians. The idea of a fictional universe open to any creator who wants to take part in it is considerably newer. French authors like Verne and Balzac had created the idea of a single universe linked through multiple texts, and following them, the dime novels and story papers of the late nineteenth and early twentieth centuries had established the idea of ongoing fictional universes, but those universes were limited to magazines published by the original stories’ publishers. It was Lovecraft who first created a fictional universe that anyone was welcome to take part in. Both during his lifetime and immediately afterward, other authors made use of Lovecraft’s ideas and creations in their own stories and novels. Lovecraft’s generosity with his own creations ultimately gave them a longevity that other, better writers’ ideas and characters did not have.

Finally, Dina Gachman at Studio System News names 10 feature producers on the up and up, including Alicia Van Couvering, who writes about film make-up artists in the current issue of Filmmaker.