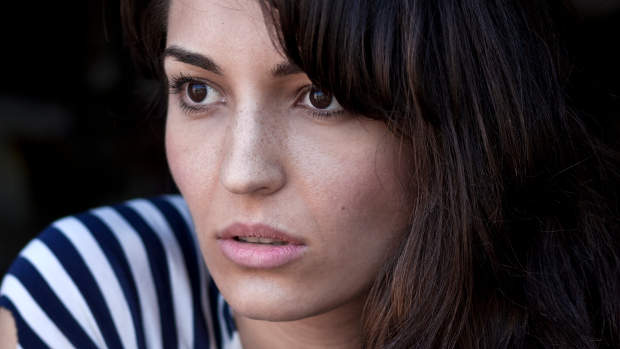 Carlen Altman is strictly low-brow. She loves Leslie Nielsen, Ja Rule and Weekend At Bernie’s; she runs a jewelry company that stocks Jewish Rosaries (jewishrosaries.com); and was seduced into performing by the success of her first public access show, Sunday Night Live, which ran on the campus channel of SUNY-Binghamton College. “It got taken off the air because we did this skit about a rape clinic, which did not go over well,” says Altman. “It was a competitive rape group, like who had been raped the most times…  It was funny though.”

Born and raised in New York, Altman’s parents met when her comedian father, Bob Altman (aka Uncle Dirty), auditioned for her mother, a theatrical agent. A college internship at Comedy Central changed things for her. “I came up with an idea for a commercial and they made it,” she remembers. “That gave me a sense of confidence in my comedic ability.”

Now a fledging comedienne, she doesn’t do material about dating and sex, and doesn’t really like “hanging out with improv groups eating burgers,” so it’s been difficult to find a role model.  It was at a stand-up show that she met Alex Ross Perry, the writer-director of 2009’s low-budget psychedelic WWII film Impolex. She had done a memorable turn in Ry Russo-Young’s You Wont Miss Me, opposite Stella Schnabel, and Perry complemented her performance and her blog. They began to write The Color Wheel, a black-and-white feature enjoying heavy play on the festival circuit this summer. Playing misanthropic siblings on a road trip, the two are at each other’s throats, but they mutually recognize that they’re together in feeling deeply, awkwardly alone. Then there’s the surprise ending, which may rustle some feathers. It is not a typical family reconciliation story.

A standard post on Altman’s blog might read, “A blood vessel popped and filled my eye with blood. Do you want to dance with me?” As a budding indie ingénue, Altman stands out — as beautiful as a French New Wave star, she cultivates a strange, disarming screen presence, full of spontaneous foreign accents and aggressive put downs. “I feel cheerfully alienated in real life. Not alienated in a Goth way where I’m ostracized from my suburban community, but I suppose I do feel alienated in terms of my career path. Because I don’t even know what it is yet.” — Alicia Van Couvering