Switching from a DSLR to the Canon C100: Interview with Ben Pender-Cudlip 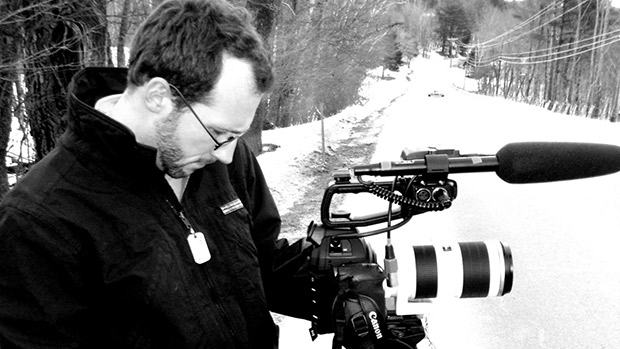 Ben Pender-Cudlip is a Boston based filmmaker who specializes in nonfiction work. His short film Sanjiban, which chronicles the passing of filmmaker Sanjiban Sellew, premiered at Hot Docs last year.

Ben recently switched from shooting on a DSLR to the Canon C100. In part one of this interview he talks about his experience switching to the C100, and in part two he talks about the first major project shot with the camera: documenting an ice-climbing expedition.

Filmmaker: What were you using prior to getting the C100?

Pender-Cudlip: Before the C100 I was using a Canon 60D, which is sort of your standard DSLR crop-sensor camera. I kitted it out with all the stuff to make it work for video. Most of what I do is observational documentary, so I’ve got the camera on my shoulder and I’m shooting for hours at a time trying to be unobtrusive. Dual-system sound isn’t really a good option for that type of thing, so I shot with the 60D using an on-camera mixer called the MixPre-D by Sound Devices and fed two XLR signals into it. I had a shoulder rig using a wireless lavaliere and a shotgun.

Filmmaker: Were you considering any other cameras or did the C100 seem the only option?

Pender-Cudlip: I’ve been really sick of all the DSLR hassles for quite a while. There’s just so much friction to using them in a run-and-gun situation. I’d been looking for another solution, and the Canon C300 just wasn’t going to be it because it’s so expensive.

I looked at a couple of Sony’s that are big chip cameras, but I really didn’t like the lens solutions for any of them.

When the C100 came out it was like the camera was made for me — as though they sat down and said, “What do you want?” It was everything I wanted; it uses the same glass that I use, my SD cards work in it, all of my gear works on it great. It was a drop-in replacement to my existing camera.

Pender-Cudlip: I was pretty astounded by how well it performed in low light — you can crank the ISO through the roof and it still looks good, and when it gets noisy and grainy the grain has this organic feel to it. It’s kind of like film grain as opposed to the multi-colored fixed-pattern noise I’m used to on DSLRs where you can really see these nasty gross artifacts. That was surprising, and I was really delighted about that, by how far I could push it in low light.

I was expecting the ergonomics to be a bit weird. I was expecting to have to use it on some sort of rig, but actually just using it as is — the body with a shoulder strap — has been fine, so that was a really pleasant surprise too.

Pender-Cudlip: The built-in EVF — the viewfinder that you put your eye up against — is a little bit worse than I had expected. It’s tiny, it’s like squinting at a postage stamp. And you need to put some sort of padding on it because when you put your face up against it the cover doesn’t even seal out the light. Once I taped a little microfiber eye-cushion from Blue Star to the EVF, my life got a lot better.

Filmmaker: What lenses are you using most frequently?

Pender-Cudlip: My standard run-around lens is a Tamron 17-50mm f2.8 IS, mostly because I’ve been using that forever and pulling focus on it is like second nature for me now. I’ve got a lot of muscle memory built in to that lens. I am also using the Canon 70-200 IS II that’s f/2.8.

Filmmaker: How do you use it hand held?

Pender-Cudlip: It’s good to use hand held, especially if I sling the camera down around my belly with the neck strap. It’s pretty damn stable. You can’t shoot for an extended period of time with it up to your face because the lens is so damn heavy, so I’ll do a bunch of hand-held shots like that.

I have a little holster from Lowepro that sits on my waist. When you unzip the holster a sort of accordion opens and there are two pockets. I can take one lens off the camera, put it in one of the pockets, then take the lens out of the other pocket and put it on the camera, and then with one hand zip up the lens case. So I can switch lenses on the fly, in and out in 10-15 seconds, without having to set anything down, which is really nice.

Filmmaker: Do you have to switch off the C100 when you switch lenses?

Pender-Cudlip: You know that’s a really good question. I don’t know! I’m used to not turning off my camera when I switch lenses on the 60D, and I know that on the C300 there’s this capacitor that blows if you switch lenses while it’s on. And the C500 has this lens exchange button where it powers down the camera real quick.

When I remember to, I try and turn the camera off. I’ve seen it both ways online; I haven’t messed it up yet so I’ll see. I’d like to know the official line from Canon because the camera takes a while to turn off and turn on. It takes like four or five seconds to turn off and then a good 10 or 15 to turn on, so that’s a pain in the ass [For a warning about changing lenses, see note below.]

Filmmaker: Have you bought any new accessories with this camera or are you mostly using what you already had?

Pender-Cudlip: Being documentary, I want to have as little as possible hanging off the camera. I don’t use an external monitor; the peaking on the unit is pretty good, and I’m pretty good at focusing from all my time on the DSLR, so that’s not really a problem.

I don’t use external recorders because that’s a pain in the ass. For most of what I do, which goes to the web, I don’t really care if it’s 4:2:0 at 24m/bits, it still looks good.

Filmmaker: What about using it on a rig?

Pender-Cudlip: I used it for half a day on a Cowboy Studio shoulder rig, but it’s not really in the right position, and I’ve been pretty happy working with it rigless. If I’m doing an extended interview what I’ll do is just jam it on a mono-pod, but other than that it’s been pretty agile and surprisingly stable.

Filmmaker: Has using it changed in any way how you’re working or shooting?

Pender-Cudlip: It’s easier to have it on me, hanging off my shoulder strap, and just pull it up and knock off a few shots. With my old rig, it was like this monstrosity with all these things attached and you couldn’t set it down. It was really hard to hold. There’s a lot less friction using this in the real world; it’s a lot easier to grab and shoot.

Filmmaker: Anything you’d change about the camera?

Pender-Cudlip: Personally I’m considering getting the Canon 24-105 lens just because this camera is so good in low light, I don’t think I’m going to miss that stop between 2.8 and 4.0. But that’s not really something about the camera.

Honestly there’s not much. It would be nicer if it recorded 4:2:2 and I would love 60p. I don’t do much over-cranking but that would be kind of nice to have. 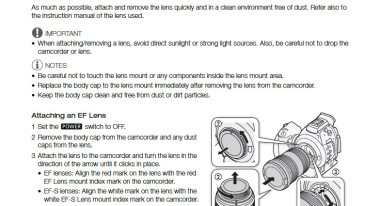 [NOTE: the EOS C100 Instruction Manual contains instructions for “Attaching an EF Lens” that starts with “1. Set the POWER switch to OFF.”

Another C100 owner – who also owns a C300 – has adamantly told me that you must turn off the camera while switching lenses.]