Making the Movie Was Easy, Crowdfunding Is Hard 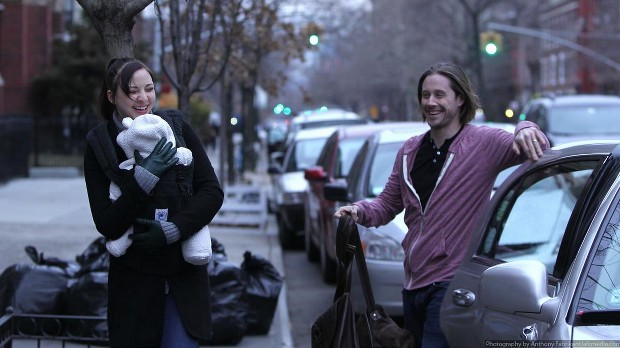 Making the movie was easy, crowdfunding is hard.

Ok, that’s a ridiculous oversimplification, but not completely untrue. I’m currently in the midst of a crowdfunding campaign to raise post-production funds for my first feature film, Sidewalk Traffic (a comedy/drama about a struggling filmmaker and new father in post-Great Recession NYC), which I wrote, co-produced and directed this past winter.

Realizing the lifelong ambition of directing my first feature film meant making a substantial financial investment (though well short of what an MFA at an elite film school costs), informing my wife and two young daughters that I would be for all intents and purposes gone for the better part of a month, taking a leave of absence from my job as a documentary journalist with Reason TV for two months, and working 20-hour days during our 15-day shoot.

It was a nerve-wracking endeavor, and you can be sure that my body started to fail me near the end of the production, but I never felt out of place. I belonged doing what I was doing, collaborating with actors I admired like Samm Levine (Freaks and Geeks), Heather Matarazzo (Welcome to the Dollhouse), legendary MTV News anchor Kurt Loder, Tom Shillue (Mystery Team), Dave Hill (This American Life) and our outstanding lead performers Johnny Hopkins (Mercy) and Erin Darke (Kill Your Darlings). Working with our dedicated production team led by our miraculously talented and resourceful producer Robyn K. Bennett, we got the 100-page script in the can on a microbudget, but were left with almost nothing in the bank.

Which meant we had to crowdfund to finish the film.

I always knew this moment would come. It was by design. But I would not phone this effort in. Like our film, and the outside-the-box methods we used to execute it, our crowdfunding campaign had to stand out.

I had seen so many fantastically produced pitch videos featuring a great concept and the promise of prominent cast attachments, ultimately fail to reach their crowdfunding goal. Having put so much on the line for this film, and with my adult responsibilities growing exponentially by the day, I came to see this as my “one big shot.” I couldn’t fail so close to the finish line. But how do you separate yourself from the crowdfunding crowd?

It was simple: shoot the movie. Get it done before the world knows you need money. Only once principal photography was wrapped would we start a crowdfunding campaign to complete the film.

And that’s what we did. It was an amazing shoot, and the film looks great. Now it was time to let the world know what we had.

Using the skills I’ve honed as a shooter, editor and voiceover artist while producing documentaries for Reason TV, I put together a punchy and entertaining pitch video featuring fantastic-looking clips from the film (shot on the Red EPIC by our DP David Kruta), bragged about our fantastic cast, explained what we had accomplished already and what was left to be done. The video came in at an easily digestible 1:50.

Something I’ve learned from producing online docs: get in, hit them hard, get out leaving them wanting more. It was important to me to make the pitch video entertaining, and almost as important: short. Anything more than two minutes is an eternity in viral video time.

There would be no awkward edits or embarrassed jokes about how silly it feels to beg for money for your passion project. Yes, I get the self-deprecating humility spiel. I like to think of myself as self-reliant, and it literally turns my stomach to ask others to financially indulge my artistic obsessions, but cutting yourself down to soften the sell isn’t the answer. No one is moved by that. You can be humble, but own the moment. You ARE begging for money. If you’re making fun of yourself for doing it, you’re essentially making fun of anyone considering giving you their cash.

Once the pitch video was ready, the next question was, “What venue shall we choose?” Kickstarter was never really a consideration, as their “all or nothing” policy left no room for error, and I was not going to start a second campaign if I failed the first time. I ultimately decided on Rockethub after being introduced to their CEO, Brian Meece, by my friend Dani Faith Leonard of the NYC/LA-based artists community Big Vision Empty Wallet. Brian gave me a personal consultation on the do’s and don’ts of crowdfunding, and assured me that my strategy was strong and my goal realistic. He also pledged to feature our campaign on Rockethub’s front page and promote it anyway he could. That’s a good pitch! So, Rockethub it was.

I chose to start a 45-day campaign, which seemed long enough to build awareness and to endure the ebbs and flows inherent in fundraising. Then, I quietly emailed a few close friends and family members to “seed the pot.” Any street musician will tell you that you never start playing with an empty hat. Throw in a few bills and coins, present the appearance that others have approved of your performance with money. After that, I reached out to my production team, asking them to spread the word to their networks and about a week later, I went wider, asking our actors to post the Rockethub link all over Twitter and Facebook. And finally, I went as wide as I personally could, sending out the dreaded spam email.

It is common knowledge that spam should be avoided at all cost. But sometimes it’s just not possible to send a personal and sincere email to 1,000 individuals. So, if you must spam, remember a few things:

Be respectful. You did just spam after all, implying that the personal touch is something you don’t have time for. Don’t apologize for the act of spamming, but getting right to the point means you will eat up less of the reader’s time than if they had to skim through a mealy-mouthed mea culpa.

Be confident and to the point. Explain what you’ve done, what you’re trying to do, and how people can help. You’re a salesman. Own it or don’t bother.

Be sincere. “Thank you” is not a throwaway line. If you’re asking for help, you should make them feel like their help matters, as does the time they’ve taken to read your email.

I’ve been stunned at the level of positive response. People I have met only once or twice have made contributions. Co-workers of mine from five jobs ago have kicked in cash. And in one notable case, an indie film pioneer made a donation.

A few months ago, I sold a used CD online to someone named Andrew Bujalski. As a film geek, that name jumped out at me. Could this be the same Andrew Bujalski who essentially created the mumblecore genre with his films Funny Ha Ha, and Mutual Appreciation? I sent a note with the CD asking if this indeed was the filmmaker of the same name and mentioned that I was an indie filmmaker, too. He replied with a kind email informing me that he was the same microbudget auteur, and wished me luck in my movie ventures. After launching the Rockethub campaign, I decided to send Andrew the link, soliciting his opinion and nothing more. A few days later, an email popped up with the subject line: “Andrew Bujalski has funded your project.”

How cool is that? I had never met this gentleman, and had only exchanged a couple of emails and a discounted CD with him, and yet he was moved by my pitch, film, and/or personality to make a contribution.

The lesson gleaned is that you never know where your support is going to come from, so you have to ask. Don’t be afraid to be bold. Be respectful, but direct. Don’t waste people’s time. Make them feel they are a part of something special, not indulging a pity case. As long as you are respectful, confident and sincere, you have nothing to lose.

Until the evening of July 12, 2013, when the campaign ends, I will be living by these self-imposed rules:

Update at the end of each week. Thank your donors immediately, and then shout out to them during your weekend social media round-ups. They may be motivated to spread the word and brag of their philanthropy.

Be consistent, but don’t torment people.

Keep the Sidewalk Traffic Facebook/Twitter pages buzzing with daily links that update our audience on what the people in our cast are up to, i.e. comedy shows, TV appearances, film roles, book readings, musical gigs, etc.

Spare no effort. Leave it all on the field or get out of the game.