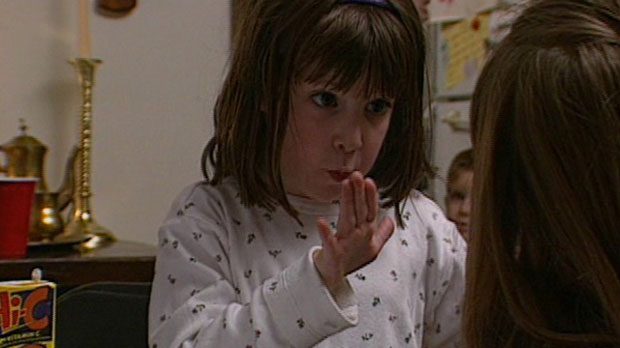 by Filmmaker Staff
in Directors, Filmmaking, Interviews
on Aug 16, 2013

Last year, to celebrate POV’s 25th anniversary, Filmmaker organized a series of conversations between documentary directors whose work had been featured on the PBS non-fiction showcase. Last month we continued this series with a discussion between filmmakers Stephen Maing and Lixin Fan. This week we are featuring a conversation between Adam Larsen, whose first feature length documentary film Neurotypical is currently streaming on the POV website, and Josh Aronson, director of Oscar nominated documentary on deafness Sound and Fury. Here the two consider their work helps to define different cultures.

Larsen: I want to say that Sound and Fury made a huge impact on me. It’s the first film about difference that I saw that handled it in a way of culture versus disability, and that got the conversation going where you have all these perspectives and different points of view. Thank you for making it. I appreciate it, and I think it’s one of the reasons why I kind of went down the path of creating Neurotypical the way I did. I really felt that there were folks on the autism spectrum who could advocate for themselves. I wanted to make a film from their perspective and not have it be about them, per se, not talking at them, but talking with them. So Sound and Fury was really wonderful for me to see.

Aronson: Well, thank you for saying that and you’re right, it was certainly about culture. It was about the two clashing cultures. What I loved about it was that when we made it we had little private screenings and we had a feeling that we really had something that was going to be a universal story. I always wanted it to be more than a story about deaf culture, world deaf culture and signing deaf culture, I wanted it to be about minority culture. I had a sign – as they teach you in writing school, to have the one sentence that your film is about or your book is about over your desk all the time – and so for the four years that it took me to make the film, that was there, a sentence about identity. When the film screened for the first time at film festivals, people stood up and put their hands up and all said the same thing. [African Americans] would say, “This is my story, it’s about struggling to expand beyond my culture.” [Homosexuals] would say, “This is my story.” Chinese Americans and [Latinos] would say, “This is my story.” So that was a sign that we had succeeded with that cultural story, and I tried to keep that cultural theme in many of my films, if I could. I did three films about transsexuals for Showtime, and I really began to feel very early in that film that it was about culture. It was about which culture they wanted to belong to, because it had to do with gender and the world they were going to live in, which was their culture. What you were saying about your film Neurotypical was interesting, because the film I was interested in working on for many years was going to be called Spectrum Normal; about the line on the autism spectrum that says at what point you are normal, at what point someone is autistic or has Asperger’s. But what is normal? It’s a moving target to define, because you say it’s neurotypical and that’s such an interesting thing to explore. That’s what interested me originally about that subject.