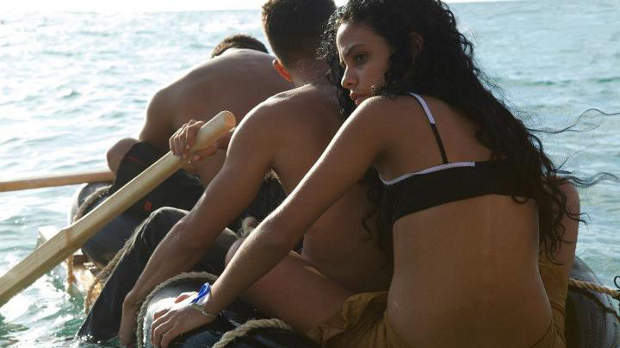 by Brandon Harris
in Directors, Interviews
on Aug 23, 2013

As sweltering as it is unforgiving, Havana is a tough place. Tourists rarely travel beyond the district that give the impression of faded tropical glory, but much of the city more or less resembles the Bronx or Newark of the ’80s. Black markets thrive and people have to hustle to survive; especially after their families have poured through there food rations. The nightclubs that fueled a vibrant Western tourist culture are a remnant of their former selves. Cigar salesmen keep busy, but like everyone else, they live with a thinly disguised fear.

Lucy Mulloy’s magnificent debut film Una Noche, adapted from her Student Academy Award-winning short of the same name, understands this better than any single recent film about Cuba. Unraveling the island’s complex social and political underpinnings in a way that seems almost impossible for a London-born and -bred, NYU-trained filmmaker, she has made a movie about three young people trying to get off the island that bursts with energy and exuberance, while never shying away from the dread that hovers just beneath people’s dashed dreams. In a gauzy, saturated film, she brings us Raul and Elio, a pair of young hucksters who seem ripped from a Latin American version of Mean Streets, but their behavior and motivations are both surprising and totally understandable; disillusioned teenagers are often like that, even when they are potentially embarking on the most dangerous 90-mile journey the Western hemisphere has to offer, from the Caribbean’s largest and most stultifying city to a place of seemingly endless possibility.

Una Noche, a project which was shepherded in post production by the IFP’s narrative labs, first appeared at the 2012 Berlinale, before having its stateside premiere at that year’s Tribeca Film Festival, where it won prizes for its cinematography, both of its lead performances and its directing. After a long and heralded tour around the international festival circuit, it opens in Manhattan today through Sundance Selects. 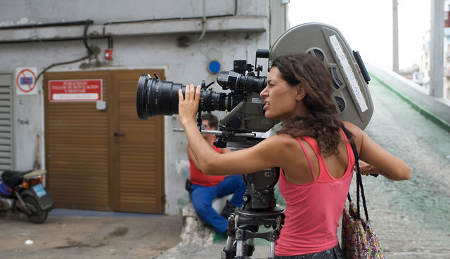 Lucy Mulloy on the set of Una Noche

Filmmaker: Why Cuba? What first drew you to the place?

Mulloy: My mother grew up in the Czech Republic under communism and I studied politics and so I was interested to see what it was like in Cuba. And, you know, it’s a hot, beautiful island… that was a good reason to go! I’d been studying really hard for a long time, really hard academic work. I did some work after I graduated and made enough money to go out to Cuba. My friend was studying photography there. Basically, I got a small room next to her. She had been there for about a year at the art school [in Havana] and so I wanted to go there and see what it was like. I wanted to get out of the rainy U.K. and go somewhere sunny! There were different times when I was supposed to have gone there before and it had always kind of fallen through. I’d wanted to go for a while.

Filmmaker: Once you had the idea to make this film, which I believe came through an anecdote a stranger had related to you, how did you go about unpacking that moment and making a fully formed narrative out of it?

Mulloy: The short film really deals with these three people being on this raft together and the dynamic between them and what you could bring out and show about their humanity and how they could change one another and learn about each other in that journey in that really confined space. That was all really interesting to me. Working back from that and looking at what motivated them to leave, what motivated them to be so dedicated to each other and what was Elio’s attraction to Raul, where did that come from? All of these different dynamics between the characters were pretty interesting to me. Sometimes people ask what is it about Raul, did I know somebody like that in particular. I don’t think that is really how I wrote the character. I think it came more from wanting to explore these relationships and bring out the different dynamic between characters, the contrasts between them, what attracted them to each other and what made these relationships work.

Filmmaker: On the heels of the success of the short, was the process of putting this movie together easier? Did doors open for you in the period of gestation that wouldn’t have without the acclaim already associated with the project?

Mulloy: Well, the Student Academy Award was great and we ended up getting a Spike Lee grant, but that was when we were already in production. And we got something from the Hollywood Foreign Press Association or the Hollywood Reporter, that was like five grand, and that too was as we were already going into production. To be honest, I think that I made the film kind of completely off the radar.

I wrote the short film for NYU grad school to graduate and then I went out to Cuba and it turned into something much bigger. That happened on its own, it happened outside of anything to do with the film industry or anything to do with ideas of making it with a production company or a studio. That never occurred to me; I knew I was happy to do it on my own terms in Cuba because nobody else would have that access. So that never really came into question. I guess the attachment thing started to happen once we had footage. Tribeca was on board and IFP was incredible as well. But that was all kind of in the editing stages. The film was already in existence. It was not what it ended up being. It was thanks to those intuitions that I was able to complete the film because it was completely exhausting making the film in the way that we did.

Filmmaker: Were you forced by limited means to work in a very small fashion? The resulting aesthetic certainly doesn’t feel like it.

Mulloy: Basically, what happened was I got a bunch of film from Kodak, a bunch of short ends. I called up every single Kodak around the world and asked them if I could get a roll of film from each of them. [laughs] By that point we basically had all the film we needed and we were taking these trips to Havana. You know the overhead locker things in the airplane? We would have half of those filled up with film stock. [laughs] We just took it all out there. Basically there is no lab in Cuba. It started off with me being very idealistic and saying I’d love to shoot on film because it’s going to be amazing, the landscapes and the visuals in Havana would just look mind-blowing on film. So it just started with this idea and wish and then it started coming true, but when it started coming true we started realizing there is no lab in Cuba and no way to see our dailies.

Then we realized there was no real cameras out there we could use, so then we had to get our cameras from London, from ARRI, who sponsored us. So then there was this big, huge process that starts happening. Once we were in Havana, I was very conscious of trying to make sure our focus was good. So we wanted to get a focus puller from the U.K. that was good. And then the camera came with a d.p. from the U.K. as well. So there were all these things that started happening and the crew started getting bigger and we were interviewing everyone out in Cuba. We ended up getting lucky and meeting good people and working with people there. The crew ultimately ended up being about 30 people. We started a production office and we started from the ground up, we just sort of made our own infrastructure from nothing. There wasn’t anything in Cuba for us to work with independently unless we were to give our budget up to the authorities and it never really came into question that we would do that.

We made the movie with the support of this guy, Ricardo Miranda, who runs an organization that is more or less the official audio-visual Cuban association. He got us our first permit and with our first permit, that opened all the doors for us. We got more permits on the basis of already having that stamp of approval.

Filmmaker: Was the Cuban government helpful to the production?

Mulloy: In a particular way. It’s like one guy who works for a subsidiary of the television, Miranda, and he is a big supporter of independent films. Small videos, people making commercials, they get their permits through him because people coming out of the art school, if they want to shoot in the streets and things like that, they can go to him. We were very lucky, basically, and he was very supportive. Through him, we kind of cracked the door open and got through and got support from the establishment in that way. Since then the movie has been banned in Cuba.

Filmmaker: The movie is now banned in Cuba?

Filmmaker: Is that a result of the attempt to defect by a couple of the stars during last year’s Tribeca Film Festival?

Mulloy: I can only imagine. It could be. It could be a number of things. I don’t know. I can only speculate why they did that. It showed at the Havana Film Festival and loads of people came out to see it. It was insane. They had a riot. Riot police were stopping people from getting in. It was scary. [laughs] You can see it on the net if you put in Una Noche and riot, it comes up, we posted the video. I think 2,000 people showed up and the cinema fit maybe 1,000. People had heard about it and they wanted to see it. There aren’t that many movies made in Cuba. That was an amazing experience. The cinema institution owns and operates all the cinemas in Cuba and they didn’t program the movie in a single cinema.

Filmmaker: The programming apparatus is centralized in that way? It’s sort of being banned by omission.

Mulloy: Yep. It was pretty explicit. I made the movie for a Cuban audience. It was important for me for the film to feel genuine and real and organic to Cuba, so that people there wouldn’t be conscious of whether it was a Cuba person that made the film or not. It was really important for me. I was thinking of a Cuban audience the entire time I was making the film and for them to shut the door on it was, well, it was tough.